What did you think of WWE Fastlane?

Double Double+ patrons, join us for our live POST Show on Zoom at postwrestlingcafe.com

There were 2 really awesome matches in that PPV but ultimately everyone is going to be talking about it for wrong/weird reasons.

Rather than add my comments to the laughable match, a question to you both - do you think Bray & Alexa are remotely happy with the end product; or is it a case of them doing as they’re told and being quietly embarrassed by it all? (I assume Randy doesn’t care)

Looks like we’re getting the triple threat match at mania - and to be honest, I think that’s the best direction!

Evening gents. The first hour of that show was like any Raw in the last 3 years, pick one. Thought the show picked up from Rollins vs Nakamura, and finished very strong.

I think Bray’s mask is objectively a cool design, even if the context it’s in is silly to put it mildly, but as a horror fan I do like it. Not putting make up around his uncovered eye was a strange detail to miss.

That main event was everything I thought it would be and more. Ok there were shenanigans at the end but it did build the story, and the 25 minutes beforehand were tremendous. 2 quick questions - did you prefer this match or the 2015 version? And would you keep the title on Roman coming out of Mania or would you switch to Edge (or Bryan). Thanks, have a good one!

Ok. The Good: Rollins/Nakamura, Seamus/Drew, and the Majority of the Roman/Bryan match. The Bad: the ending of the Roman/Bryan match (That could have been booked better, but now at least we’re probably getting a triple threat for the title for one of the nights) and the rest of the PPV. The Ugly: Everything involved with the Fiend. Honestly, with the lighting tonight, he looked like a vomited half eaten bowl of Borscht. I really dread what they are planning with these 2 at Mania. I also feel bad for Alexa. Her character needed a reboot, but being a part of this really doesn’t help. The further away from this angle, the better. A 6 out of 10, thanks to the good matches from tonight.
Richard. 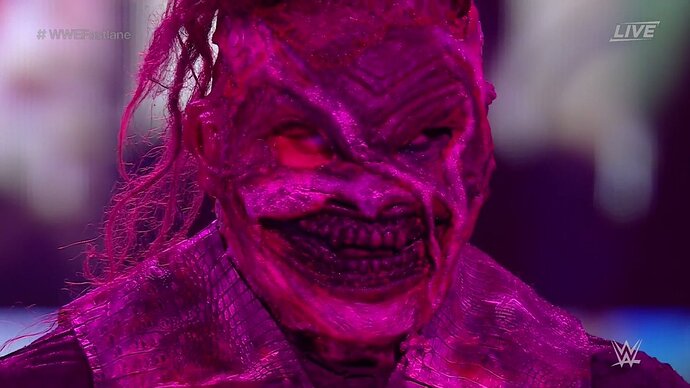 Apart from The Fiend, Rollins vs Shin and Drew vs Sheamus, I couldn’t have been less bothered about everything else.
Apollo and Big E left me confused, the women’s tag titles are just there and I don’t want to see Bryan injected into this Mania main event.
I have fully embraced The Fiend for what it is, not taking it seriously and ready for whatever whacky scenario they come up with next!
Bad points out weigh the good on this night. 4/10

I can’t be the only person who spent the last several minutes of that show thinking “Why do they hate us?” I guess they are opening the door to a three-way at Mania (so that neither Edge nor Roman has to get pinned?) but there are better ways to get there.

On the bright side, Sheamus vs Drew was the match of the night for me, up to the standards of what they’ve shown us the last two weeks on Raw and mercifully free of shenanigans. Rollins vs Nakamura was solid. I would have been happy to watch them for longer if the story had warranted a “bigger” match. And the kickoff between Riddle and Ali was decent, all the more so because I think (hope) that it looks like they’re finally sending Retribution to a farm upstate. I don’t know if they can resuscitate the members, or if they’ll even bother to try, but just freeing them from this awful gimmick will help.

I caught Mission Pro’s Empty Promises show last night and, of course, the lights out match on Dynamite and it just made me feel depressed that WWE is unable to do anything better with their women’s division than what we saw tonight, given their incredible wealth of resources.

The less said about Fiendy Krueger, the better.

I think that may have been Nakamura’s best match on the main roster and Drew/Sheamus was better than it had any right to be but the rest of the show was lacking.

I enjoyed parts of the main event but it was the definition of overbooked. Just give us winners or losers.

Exact same issue with Big E/Crews - I have no clue what that finish was. Thought the match was pretty good, but again the finish was horrible.

The women’s tag sucked and I think all four people are now less over after this entire mess of a program. Belair especially has been hurt and looked really sloppy tonight.

The Fiend and Orton stuff is a joke. Terrible