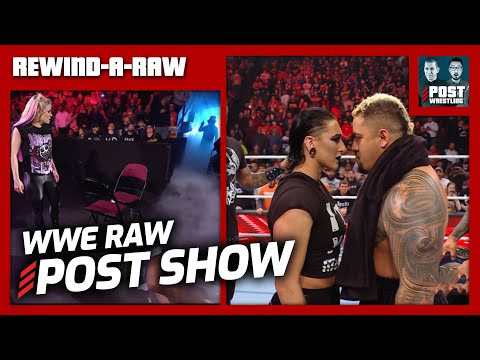 Great entertaining main event with other fun matches sprinkled in. The women should have given more time.

The Alexa / Bianca feud did not need Uncle Howdy as they had a story… but I guess that was there way of making Alexa serious.

The Nikki stuff has to be leading to something… but to what I have no idea… this time she was in the crowd behind the announcers.

Do you guys see any titles changing hands next week? In my opinion if any it would be the Raw tag titles.

Jermaine from Chicago. Raw was ok. Looking forward to the anniversary show next week. What’s the chances we hear no chance in hell next week? I found the becky Lynch bayley talking segment good. I just don’t like how they let women bleed in other promotions but not wwe. Everything is suppose to be equal in my opinion. It makes the cage match seem less dangerous. I want to ask you guys this why is hunter so scared to provide us with variety? All those guys in that match had been us champions before. Why can’t we have new or different talent have opportunities? How would it hurt to have some new guys in there? That’s how you get the crowd to care about new people. Put them in huge matches. What are you guys Philosophies about putting a variety of wrestlers on the show as oppose to the same core each week? Have a great week

I liked the main event, which had bits to make all the men look good and it seems we’re finally getting The Hurt Business back (with added Omos). If they let the group have the epic run that they should have had the first time, I’ll consider forgiving them.

Other than that, not a lot clicked for me, most surprisingly the Becky/ Bayley segment which might be the worst I’ve seen either woman do. I’m not even sure why it felt so off but it leaves me in the position of feeling ambivalent towards their match next week, which is one I’d previously been looking forward to for a long time.

If the rumours of Vince making an appearance at the Rumble are true, do you think it’s to help Austin Theory, his former protégé? Also: likely/ unlikely that Vince is on tv next Monday?

Thanks for all you do, as always.

Good evening John & Wai. I watched raw from my couch tonight, not from behind the wheel of a moving vehicle (lesson learned). My main takeaway from tonight is that I have no idea what the face/heel dynamic is in the Raw tag team division. Are the Usos heels vs a face Judgement Day? Are the Judgement Day heels vs a face Alpha Academy? Are they all heels? Are Street Profits the only face tag team left on Raw? Do the O.C. count if nobody cares about them when Styles isn’t around? It’s all very confusing.

I really enjoyed the Reed vs Tozawa match. I wish Akira would get to show more offense in his outings.

What are the chances we see members of the Anoa’i family that aren’t currently tied to the WWE for next week’s celebration? Manu, LA Smooth or Tonga Kid?

Why are they referring to Lashley as “The All Mighty” instead of “The Almighty”. The All Mighty implies there’s a Partly Mighty or a Semi Mighty. Just seems strange.

Thanks for the amazing work guys!

A solid show that did more to heat up Raw’s 30th anniversary.

The main event was entertaining and MVP & Omos’ assisting Lashley might lead to a Hurt Biz reboot. I’m left with more questions about the Rumble as it pertains to the WM main event. Does Cody’s announcement of his return ahead of time mean a bigger surprise is in store? The Bloodline are gonna have a busy night with “every generation of the Bloodline” showing up. I can see Rikishi, Afa and Sika…and I can see Twitter exploding if a certain great one may or may not be there.