Leave us your feedback and questions for Rewind-A-Raw and tune in at 11 p.m. ET. 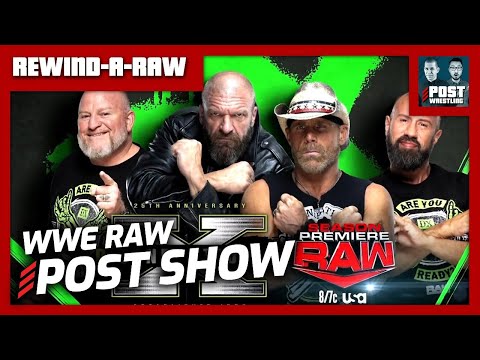 Hiya fellas! Some thoughts on Bray Wyatt’s “White Rabbit” gimmick. A few pretty key influences, and that all lead to a more Online/Cyber oriented Anonymous Army-style character this time around.

So, I’m hopeful that the “supernatural” gimmickry is left behind in favor of more production capabilities, a way to connect the showy production to a character that’s rooted in real-world logic. Something, we haven’t really seen a lot of in Wrestling, is a character that acknowledges, and leverages the production environments and communication platforms with a more modern take.

One of the few RAWs I’ve watched over the years and was a mixed bag. Miz segment was atrocious but short.

Good surprises with Brock and the Riddle and Sami match was fun. Loved the Good Brothers returning. Didn’t love the Bayley and Candice match as I don’t think she’s that over to the crowd.

A little disappointed we didn’t see more of Bray in person.

DX segment was short and their biggest hits. I was expecting Daddy Ass chants but didn’t hear them which was surprising. Maybe less overlap of the audience then I thought based on Cody’s pop at WM.

Nonetheless it was a decent show with title changes and surprise returns.

Nas from the Barclays Center

I don’t know if the commentators specifically mentioned that the Bray segment would be just a replay of Extreme Rules. But from the graphics most of the crowd just assumed (possibly naively) that Bray would be there in person. A lot of people in my section were very pissed. Of course everyone forgot as soon as Brock’s music hit.

I liked the show; Brock being back was cool, and seeing the Good Brothers was a cool surprise. As for Kevin Patrick, I thought he did ok, I have a soft spot for him as before WWE he used to do interviews and a few games announcing for my local MLS team the Chicago Fire, so it’s nice seeing him doing well and wishing him luck.

Mr. Robot, aside from the obvious society-style videos, which themselves were an appropriation of Anonymous, the dialogue so far. “Who Killed the World?” and “Revel in What You Are,” sound like pull quotes from some of the fsociety “mantras” from the shows.

So glad somebody else noticed this Monday’s video was right from F Society. Which aired on…….USA Network.

And the one that aired during extreme rules.

I miss Mr. Robot. That was a fun show.

It really was, I think the first two seasons were some of the best TV of its era.