Leave us your feedback on Monday’s eventful edition of Raw from Chicago along with any questions coming out of the show.

I wasn’t looking forward to tonights episode at all, and was actually planning on fast forwarding through as much of it as I could. But I might myself watching a lot more tonight than I had planned. It felt like a lot happened tonight, and I’m surprisingly looking forward to next week.

The various heel/face turns through out the night felt like it’s changing the landscape enough to make it interesting. Kurts reveal as the Conquistador was a genuine surprise and I rewatched it several times. Elias’ line about Cena’s hair got a hardy laugh from me. And I’m really digging Lashley and Rush as heels.

I may be in the minority here but this was one of the best Raw’s in quite a while in my opinion. The Lashley/Owens turn was great and a much needed change. Main event was a good match and continued the suspense and tease of the Ambrose tension. Finally, the Bellas turn was well executed and got over with the crowd. Solid 8 out of 10.

Also, is it just me or does McIntyre look more and more like a star each week? Hopefully he keeps being pushed beyond this current storyline.

My biggest question of the night did they also turn ko face? He’s one of the best heels in wwe. Although he has been a little stale of late otherwise great show.

Liked the double turn with Lashley/Owens. My wife said “that’s the 1st time I’ve remotely given a shit about Bobby Lashley”.

Was looking forward to Bliss vs Trish 1 on 1. Bliss being hurt and Lita maybe not ready to work a singles? Not the worst solution.

I know the HBK return was settled on but it was still disappointing. I was at Mania 26 in Arizona. I was proud of the guy for staying away. If he came back and did something that was more creatively fulfilling (the AJ match last year or literally anything else) I’d get it. And I know, the money will be unreal, can’t fault him for it. But it’s disappointing to see after all this time he’s lured back for a glorified legends match and a paycheque.

I actually came to Chicago to attend a music seminar from up-and-coming pop artists Carly And Martina, but after reading John’s daily update about all the stars on Raw and surprises, it sold me to change my plans and go to Raw.

I knew the night was off to a good start when walking to my seat, Kurt Angle passed me in the back hallway. First time in AllState Arena, and it amazed me how old and small it was, and that the wrestlers had to pass through the same area as the fans.

It was hilarious that during the commercial break after the battle royal Kurt Angle match, JoJo announced Baron Corbin as “still the Raw General Manager” to enormous heat.

Anyway, thanks for the show guys, and thanks to John for the update that led to an amazingly fun night.

I really enjoy tonight’s edition of Raw. Ronda selling on the Bellas attack was great, the Kurt Angle reveal was well made, the decision to turn Lasley was the right one and the main event was a good match with an interesting ending.

Question; do you think that Kevin Owens could have a run as a baby face and do you think he could be great in that role?

Jake in the Windy City

Maybe the next time Undertaker shows up on Raw, DX should take over the TV truck and troll the hell out of Taker and Kane.

I just wanted to let you guys know about the atrocious media coverage that was in Melbourne’s major newspaper on Sunday.

No mention of Billie, Peyton, or Buddy. However not only did state that Randy Orton appeared but also stated the following about Ronda Rousey:

"“Blink and you may have missed it, but the former UFC Champion redeemed herself during a six-women tag team match, where she won the WWE Cruiserweight Championship.”" 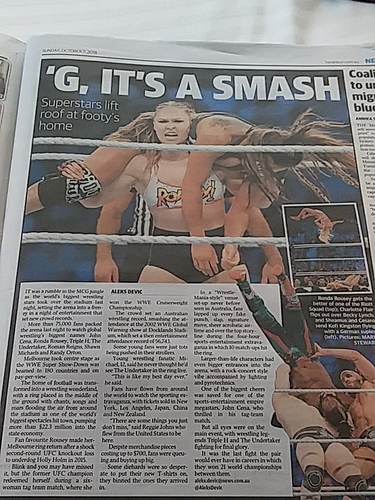 Bring on Evolution…the PPV that is.

I was at a house show last sunday and the guy in front of me is certain that Seth is going to turn again and this entire Dean angle is a swerve. Any thoughts, or is Seth too babyface to turn again?

Hello again it’s me just checking in and first and foremost congrats Jon for signing with KSW. Now we know what you really have been doing in the post office. What I’m really here to say is this raw was fun to watch. Did Vince get left behind in Australia or something wow they really knocked this show out of the park. From Gereatrication X to The Conqestador aka Kurt Angle to the bellas finally turning on Rhonda this show had a lot of meat on the bone to knawl at.

-ever notice that Lio Rush sounds like the guy from Cameo? I do

I’m out of here peace