Leave your feedback here for Rewind-A-Raw.

What did you think of tonight’s Raw?

Lucha House Party rules seem pretty heelish for faces to be performing on heels. Poor Revival, they could and should be so much more.Do they have heat or something.

I thought Corey Graves “Eyes Wide Shut” referenceb was really funny and was even funnier when Renee laughed mid sentence. I always like when commentators are able to pop each other.

i’m going to take an AOPee…poor Drake. I hope this isn’t a thing now.

Run-of-the-mil show, 6 man tag worked well in giving Corbin a perceivable chance for TLC while building up Braun for a likely gutsy win. Dean insinuating that Roman deserved Leukemia was so cheap, the Seth-Dean storyline is strong enough to not need to bring up Roman every week. Poor Seth was the latest victim of the low blow craze, WWE are starting to milk that dry. Sasha and Bayley not wrestling the Riot Squad was a miracle, but losing to Nia and Tamina is not much better. Nice seeing Ronda sell her beatdown with a nice big smile, but her intensity was great and the crowd gave her a highly favourable responsible, complete contrast from yesterday. I swear I could’ve heard “No we don’t” to the “We want Becky” chants, maybe i was just hearing things.
Overall it was meh, 5/10.

I’m sure they want to encourage Ronda to use her own voice with these promos but for weeks now, they’ve gone on for too long and become repetitive. The main points make sense but she keeps rambling for so long it loses some of the impact.

Question: If you were doing a ranking of guys on Raw that have “it” as a top guy, how long would your list be? The flip-flop of Braun has cooled him off a lot. Right now only McIntyre & Rollins seem hot and the direction they’ve taken the Ambrose story just doesn’t feel hot.

Jake from The Windy City:

Raw was a mess tonight and it was found out that the script wasn’t finalized until the show went on the air. This is like WCW-level management. Stephanie with that line about “dismemberment” & “corporate liability” sure was appropriate considering the CIA report from a couple days ago. Also, an undoubtedly awkward reaction from the crowd to Ambrose saying that Roman Reigns has to answer to the man upstairs for what he did in The Shield. But then again, WWE has played with dead wrestlers and plus death in families, so why am I not surprised? The Wrestling Observer sure has some great candidates for the “Most Disgusting Promotional Tactic” award for this year. And are we supposed to believe that Ambrose doesn’t tell Renee anything? Kind of weird that she doesn’t at least defend him in some instances. I don’t know man, thumbs down on this turd of a show.

I’m going to try to defend the indefensible. No, not this week’s edition of Raw, I gave it 2 out of 10. I want to try and defend the Drake Maverick pissing angle, though it might be tough. I think it can be a good way to get heat on a guy and get a reaction for someone. Historically speaking, managers and non-wrestlers have done plenty of embarrassing things and it has been a good way for the crowd to ridicule and lose respect for someone. That said, the biggest issue for me is it’s attached to two guys who are deadly serious. If Drake was a manager of a slimy heel or not the serious general manager of a brand, I think the angle might be a little easier to stomach. That being said, I can also see the other side of the argument, with the angle being crass and something you want to avoid with being a more mainstream company. Then again, this is the same company that joked about dismemberment, implied someone deserved a disease and capitalized on a loved one’s death. I guess there are other things to be pissed about with this company, if you know what I mean.

Pretty jarring watching the Chronicle on Ambrose and then seeing what they did tonight. Their storyline has disappointed me so far. Dean also looked like an idiot at the end, acting like he didn’t know where Seth was coming out when he went through the same curtain we just saw Dean go through. It’s nitpicking, but the little things do matter. You wouldn’t see that on NXT

This edition of Raw was so bad.
In 24 hours WWE managed to destroy the AOP characters. They were supposed to be an indestructible force, but now their manager is a running joke and they lose twice in 24 hours.

What can WWE do to restore some credibility to the RAW tag team championship?

Yes, I’m back as when I went to cancel the network they offered me 2-free months, so here I am.

So Ronda receives the most vicious beatdown in her time at WWE, and 24-hours later she’s all smiles, no limping, no selling a bad arm during the match…why even do the beat down last night then?

Then we come to Drake. Yes people were comparing it to the time Austin had a gun to Vince’s head but that is completely different to the Big Show lifting you up onto the apron. How anyone can take GM Pee Pants seriously now is beyond me.

I cannot wrap my brain around the WWE. This is a multi million dollar company that has the budget to hire the best workers and the best writers in the world, and this is the show we get every week. A storyline built around toilet humor, top heels complaining about smells. A woman gets her throat crushed in a chair one night and she can fight and talk just fine the next day. They’ll have the whole babyface locker room ridicule Drake Maverick but will then switch to the announcers with their serious look and their hands clasped to talk to us about wildfire relief or anti-bullying or whatever charity PR they have going on. Every NXT star must be terrified of a call-up at this point. How can these performers not feel embarrassed to be part of this show? Everything great in WWE happens not thanks to them but in spite of them, in fact they seem to try their hardest to sabotage their own stars and stories constantly. Why do we keep watching? I guess it’s like a trainwreck, you just can’t take your eyes off it.

PS: What’s up with announcing a network special only 1 week in advance without promoting any matches?

Shows like this are why being a wrestling fan still has a stigma associated to it. If you thought the piss angle from last night was bad just wait we’ve got more!! and the worst part?? The crowd kept it going with god awful chants. Oh you thought the Roman cancer angle was tasteless before?? Let’s have Dean say its god punishing Roman to get some cheap heat!!

The one point of redemption on this show was Rousey. She was probably in the most precarious position so far in her short WWE tenure and she came out and delivered a pretty good promo to get her back on the baby face path.

Between Nakamura, Bryan, and now Ambrose it seems likely everyone in the WWE is getting punched or kicked in the dick before the year is up. Speaking of dicks, what dick thought up the AOP angle? They were undefeated in NXT for more than a year, absolute monsters, and yet months after they’re called up they’re the butt of urination jokes. Lastly, I gotta say I really like this Dean Ambrose. I want more heel Ambrose where he’s not making jokes or saying corny obviously-scripted lines. A character like that could easily be main eventing SmackDown.

Question: Who do you think will ultimately take the tag titles off of AOP? On the RAW side it seems like there’s an insanely massive gap between them and the second-top team, whomever they may be.

Is there any worse acting than what is seen in some of these back stage segments? The “actors” used as security in the back when Rollins was searching for Ambrose were beyond atrocious. These people are in the building all evening, can’t they record these segments so that they seem at least somewhat natural, instead of airing it live? Everything is so campy anymore.

Fellas it’s me, been a minute how are you? Interesting side convo we had at the bar care to share it with the rest of the gallery Wai? Anywhoo after a pretty epic ppv once again the powers that be give us a horse shit Monday raw product. If you have sleeping issues the first hour of raw is the cure for such ales. What a horrible show this was my goodness such professionalism ugh unreal ahh.

-with Becky absolutely daggering Jericho on social media is there a chance she could headline the bruise cruise next year before the next blood and oil Saudi show/evolution ppv? Did she “make the list”

-was this the lowest rated fs1 ufc show Eva? 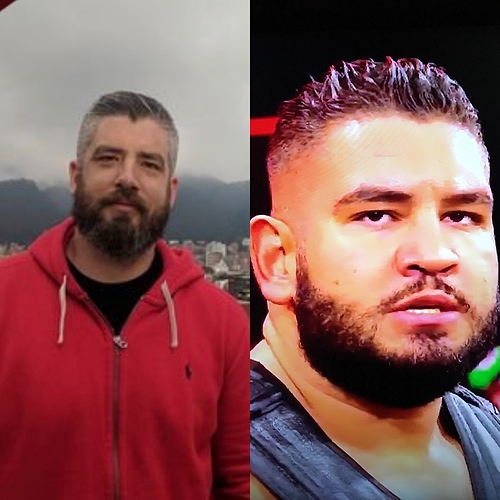