Post your feedback to Monday’s episode of Raw from Greensboro.

Also looking for your thoughts on the passing of Jim Neidhart, the buildup for SummerSlam and anything else!

Renee suffers from the same problem, I felt she had during her NXT commentary. She says “ohhhhhhhh” too much. Other than that, she was alright. Much better than The Coach, but I still prefer Booker, he’s always good for a laugh sometimes.

The Heyman/Roman/Brock stuff actually lowered my excitement for the match. I felt they had done a good job the last couple weeks, to peak my interest. They were heading in the right direction tonight, right up until Heyman sprayed Roman in the eyes. I really hope there is something more here, I dont want to just see Heyman back with Brock for a week, Roman wins and thats it. I’m hoping Heyman is playing Brock and that Owens will win the MITB, join up with Heyman and walk out as the champ.

It was an ok show tonight. Nice to see Dean Ambrose keeping up the tradition of many Scott Putski winners. I guess the biggest news coming out of tonight was Renee being on commentary, and I thought she did ok. She wasn’t a blow away performer, but she at least sounded competent. One issue I’m having is it feels like Renee and Corey are doing commentary with their dad. Renee and Corey have good chemistry, but their Dad is with them and completely out of touch. Anyway, I hope she continues, but honestly, it just makes me want to see Renee and Corey by themselves more then anything. Decent show tonight, 5 out of 10.

As a stand alone edition of Raw this was not too bad, especially when compared to the last few months. But as a go home show, I can’t say I’m any more excited for Summerslam than I was last week.

Although, my God what a breath of fresh air Renee Young is on commentary. Literally the first time in a month I didn’t switch to the Spanish commentary after the first hour.

Dean Ambrose with a shaved head and added mass is weird. He looks really off, and it’s unsettling as all fuck and makes me think a heel turn is imminent. I think I’m digging it.

The last two weeks of Raw have definitely been improvements, while it’s too little to late for Summerslam, it makes me a little more hopefully for the state of post the Summerslam Raw scene. I’m not getting my hopes up, but I am cautiously optimistic

Eric in Miami, i just saw this link at around 3 eastern a Hollywood trade website “The Wrap” which I think broke the smack down to fox story reported Dean would comeback tonight. Did WWE leak this to pop a rating and can you see them doing this in the future with other returns that might get a bigger number. 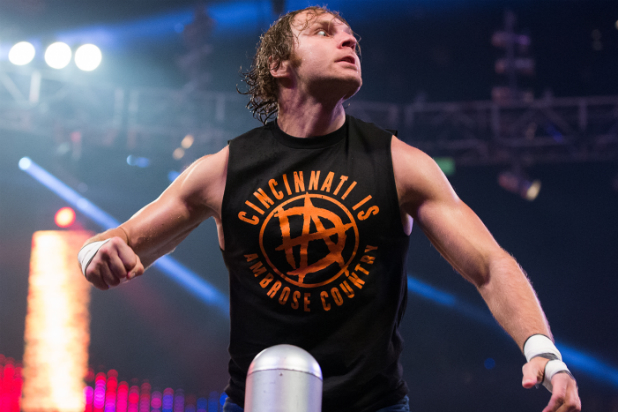 I don’t really get the point of teasing an angle with Paul Heyman that will culminate at Summerslam, only to immediately reveal it to be a ruse. I can’t wait until this feud is over.

Also, it’s amazing what a beard and a crew cut can do to make Dean Ambrose look much more like a tough guy. Perfect for the inevitable heel turn.

I’m happy Jim Neidhart got a video package, especially since he was never directly involved with WWE for two decades. Hart Foundation for Hall of Fame next year?

Renee on commentary is much better than coach or any third generic male. I enjoy the contrast to Corey’s smug heel character as she’s pure babyface and Cole is a straight play by play. I could get used to this.

Ok show. We always like Alexa’s work and look forward to that match on Sunday. We are kind of so so on how we feel about Ronda winning the title so quickly. We didn’t like the Roman/Heyman/Lesnar angle. It seems to have disrupted the momentum (used just for John) they had going into SummerSlam. We did like the Dolph/Seth angle that ended the show and brought Dean back into the mix.

I went into this show rooting for Renee to have a great outing and she was much better than Coach. It was just nice to get rid of that roasting dynamic that would distract from the product. I think she could be very good in the role if given a consistent run.

Question: Do you feel this SummerSlam will be as by-the-numbers as the card looks on paper? I just don’t feel like there are many hot programs going on, which is surprising for the 2nd biggest show of the year.

Firstly Renee was great tonight can not wait to hear more of here. Yes she may have a few first night jitters but she is so much better then Coachmen it’s not funny

Secondly by the end of RAW I felt nether excitement or expectation for SummerSlam, maybe it the realisation that 8 of the 14 advertise matchers are rematches in some form for over the past year, or maybe the fact I’ve just spent the past month watching amazing matches from the G1.

(Re-matches listed below - feel free NOT to read out)

Thought it was a difficult spot to put Ronda in to open the show. Maybe she volunteered. Very sad to these guys we grew up watching die so young. Hey guys. If you were pepper sprayed and someone was beating you up, are you just gonna take it or would you swing like a wild man. Just asking. Dean looked great. Buff and finally lost the long hair. Great way to have him come back. No need for big surprises. Everyone knew he was ready to go. Renee is great at everything she does. Wwe is very lucky to have her.

What do you guys think happens first, The Shield (without any Kurt Angle-Substitutes) having a six man tag on a PPV or Dean Ambrose turning heel?

Renee on the team was good. Don’t think she’ll be a main fixture for a while but was nice to have her there and she’s certainly more than earned her spot.

Heyman’s performance tonight was better than last week imo - speaking Samoan was just great. Like everyone else I just want this over and done with but I’m still holding out hope for a turn at Summerslam but I’ll be happy enough with Lesnar out of the picture.

What did you guys think of (Stone Cold) Dean Ambrose? Looks like he’s ripe for a heel turn to me. McIntyre is surely headed for a main event spot after Summerslam and my god how incredible was Dolph’s hair tonight!

Really looking forward to Summerslam, of course I won’t be watching, but your show should be good. Thanks for taking a bullet.