Leave us your feedback and questions coming out of Monday’s episode of Raw in Brooklyn.

This show sucked. I was expecting so much more and was actually looking forward to this episode. Balor/Reigns was good, but if you’re Finn Balor, how are you becoming the demon for Baron Corbin and not for a Universal Title match? You got 2 and a half hours from when you accepted the challenge to throw something together. I did not need a segment hyping HHH/Taker, that match hypes itself. I did not need the millionth iteration of the Riott Squad/Bailey & Sasha or Titus Worldwide/AOP or B Team/Revival. I did not need a waste of a segment with Curt Hawkins.

Braun Strowman looks like an idiot again. Kevin Owens is nowhere to be seen. Oddly enough…the one small thing I did enjoy, was the little tease of something between Apollo & Dana Brooke. I’d like to see them break off from Titus Worldwide as heels and maybe see Apollo go after Seth for the IC Title eventually.

Enjoyed a lot of the show, especially the exciting ending that felt PPV-worthy. I could’ve done without Balor being the sacrificial lamb when he’s had a claim to the title for 2 years but at least he showed great fire. Ronda had some decent verbiage in her promo but the segment was awkward without a big angle.

Question: Do you think they’ll shift Braun closer to the heel side and just accept the cheers? Being the victim of a 3-on-1 attack doesn’t scream heel but they also won’t be turning The Shield. I dig the ambiguity.

A better Raw in recent memory with me having no major complaints, other than the groaner that is acting GM Baron Corbin. I’m also confused whether the Sheild attack on Braun mean they’re heels now or if it was just a one-off attack? It’s hard to tell these days.

While I’ll probably not be watching the Australian show, Triple H did make a good case for one more match with The Undertaker, even if most wish for the latter to just retire already.

I’m really curious how the Toronto crowd will be next week, which I’ll be at live. Despite the go-nowhere feud with Mojo Rawley, it’s a shame Bobby Roode will be at the Peterborough Smackdown show, so no Glorious sing-a-long.

Ok show. Only 2 points really. We hate the Ronda has been portrayed the last 2 nights. Last night she acted like a bully. Then tonight we didn’t like the way she came across with Stephanie. Those actions didn’t seem like babyface actions. And as we saw WWE wants her to be a babyface asshe was with all the baby faces women in the ring at the end. The heel women went with a step to the back.
Huge reaction here at the house when The Shield came out at the end of the show. We hope that they keep them together with the 2 titles at least until Royal Rumble when Dean finally gets jealous and turns on them. They can have tag matches against Dean & Braun until wrestlemania when it’s dean v Seth and Brian cashed in.

We scored the show 6 Shield reunions out of 10

Yuck yuck yuck - the only parts of tonight’s show I liked were Finn getting a shot at the title and Brooklyn making him feel like the HUGE star he deserves to be and Alexa Bliss’ facial expression when Steph mentioned her as “Poor Alexa Bliss” - hilarious stuff.

Apart from that this was another absolute middle finger to the fans. Finn demons up for Corbin but not for a championship title match…um ok?! Ronda breaks Steph’s arm for no reason other than she said some kinda mean things and the Shield reunited to once again make Strowman look like an idiot. Also KO was nowhere to be seen.

On a side note, I really really want Owens’ SummerSlam ring gear. It looked awesome!! But I’ll never be able to get it because he didn’t win and it was of course a big swerve.

Do you think they sit around and think of ways to annoy the fans or do you think it just happens?

Also - crowds should not be chanting “you still suck” at Roman. I hate his push as much as the next guy but the dude doesn’t suck and saying he does is just disrespectful.

Rich from Winnipeg.
No Brock.
Finn vs. Roman was okay, then Braun, then Shield? Hmm.
Ronda being bully on boss. No angle.
And next week in Toronto? No Angle. (Kurt, that is.)
B team brings out best line from Graves all night, about wanting to kill the music guy for their theme.
Elias’ music story continues, as does the Goldberg-esque streak of Curt Hawkins.
No KO.
And the ongoing women’s story of Riott squad vs. Bayley, Sasha, and now Ember? Huh? Why?
And while good, did we want Hunter promoing a match they have month and a half to do something that their video dept. could have done better in half the time?
Now I know why I like Smackdown a lot better.

Braun looked so silly again tonight. They are really pushing the limits of ‘cashing it in’, he did right? Ha.

I was already a roman fan, dean seemed jacked to have something new to try and seth is/was white hot… Why on earth go back? Even the ring gear ha. For the record i didnt watch a lot of sports entertainment for the shield run but this didnt work for me, didn’t seem all that believable.

Oh and ronda needs to simmer down 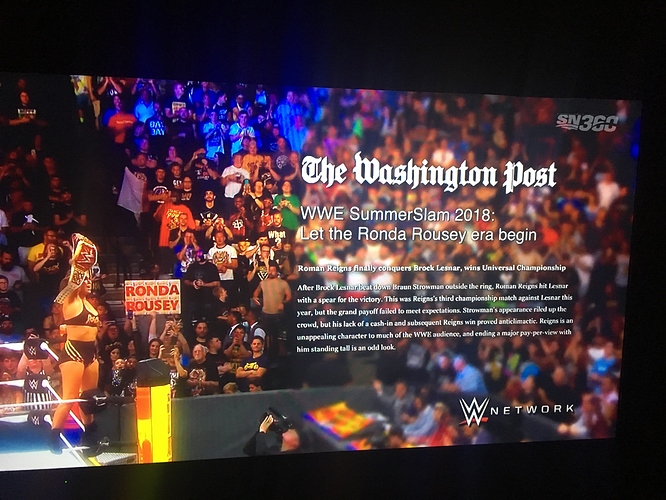 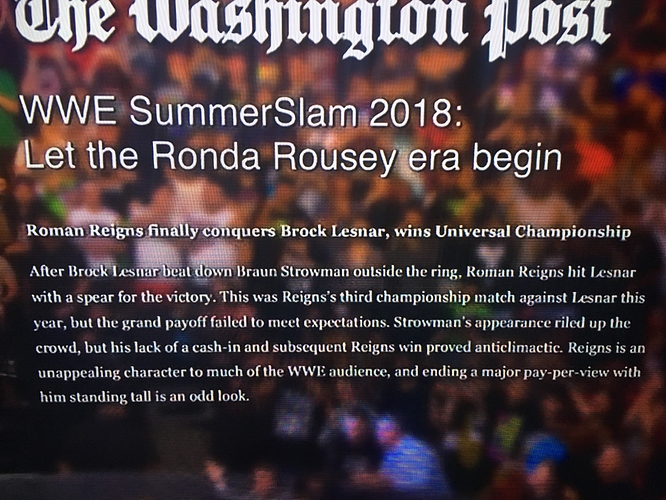