I’ll be joined by @ADThompson to review and take your calls about anything going on in wrestling.

(Hey guys, not sure if this is the right spot for this, please feel free to move/delete/whatever as you see fit. I unfortunately won’t be able to call in live tonight due to work, but wanted to toss this out for the Hangout/non-Smackdown part of things.)

I was wondering if either of you had taken a look at the most recent episode of The New Day’s Feel The Power podcast. It was very raw, insightful, and moving. There was a lot of frank and vulnerable talk about the difficulties of having to explain the hate that exists in the world to one’s own children, the stress of having to constantly present yourself as a non-threatening, happy-go-lucky person in order to avoid danger, and lots more. The New Day get a lot of deserved praise for being strong, funny, clever, and charismatic role models, but I think there’s a lot of value in letting fans (especially young ones) know that their heroes deal with pain, grief, despair, and anger just like everyone else. Would welcome any thoughts from either of you, and again thank you Andrew for sharing your experiences on Rewind-A-Raw last week. 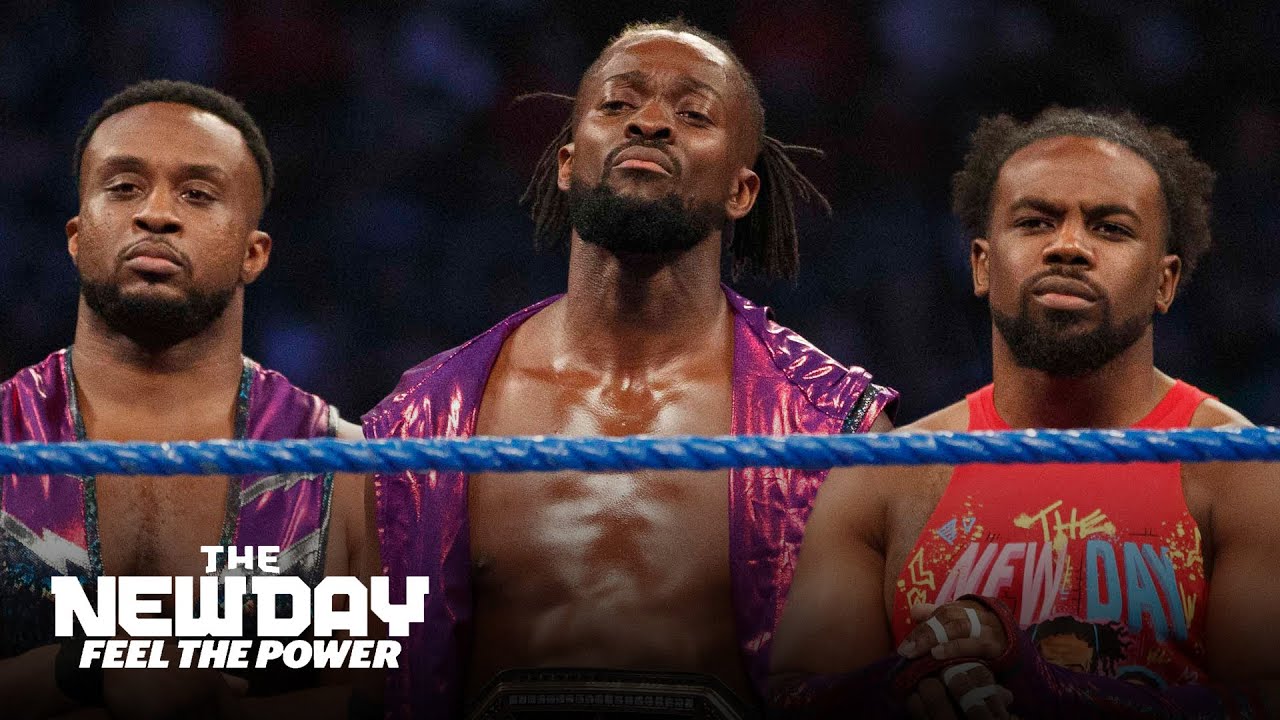 In many ways this was WWE at their best, but also their worst. Bryan and AJ delivered one of the better matches of the year, but it was on the same show that started with a guy getting piss thrown all over him. This is nitpicking but having the urine test be so big pulled me out for a few reasons. For Jeff to have been able to fill that up he should have been there as long as Tom Hanks did in A League of Their Own was, but slightly more importantly it gave away what was going to happen before it had even been filled up. The local stage manager in me was so mad

Sorry to talk so much about pee, so I’ll end by asking why Braun’s thing is trains all of a sudden? Thanks for all the hard work Wai and Andrew!

Trying to get through this opening segment made me want to fail a drug test. Cool to see AJ win the IC title in tournament fashion much like Pat Patterson did way back in Rio de Janeiro. Don’t be stupid kids, when you’re offered a buy, take it. Not much else to say about this one except we get the IICONIC’s three times this week. Hooray for small miracles.

So is this what Raw will be like under Prichard…1 phenomenal (no pun intended) match and then a Train (that one was intended) Wreck the rest of the show. I love the WWE but things need changing, but having Prichard in charge of both shows, i’m not sure if that is the correct change. But AJ and Bryan was great. Thanks guys

Haven’t watched in a while, but Bryan vs Styles got me to watch the second hour. Great match as expected, with a nice finish. Rest of the show was standard WWE, although maybe your champ literally running through his challengers isn’t the best way to build to a match.

I like the wrestlers in the crowd during matches, but they detract during promos. It’s impossible to come off genuine when they sound like they’re reacting to an applause sign, and overreacting to notoriously poor WWE dialogue.

Jermaine from Chicago. Excited to provide feedback tonight to you wai. You seem to really care about feedback and what we think. Ok. Smackdown was ok with a outstanding aj and bryant match. I don’t see a match at this Sunday’s ppv being better then that. Is that pissing segment the kind of stuff vince McMahon gives you a raise for bruce Prichard? Vince is surrounded by yes men. Lastly how long do you think it will take tucker janette to turn on Otis? We always see a breakout guy from a tag get bigger and the lesser get kicked through the barber shop window. Thanks have a great night. Wai you are excellent at feedback

As someone who has taken many drug tests for work, I was outraged at the doctor and the test as a whole. You usually pee up to a line, and then the rest goes into a toilet. You don’t fill the whole thing up. You’d think WWE would know how to administer drug tests after all these years. Was Jeff drinking water all day, he seemed to be planning this. He’s lucky he didn’t have a shy bladder or he would have failed the test due to not being able to take it. Also, what did I just watch? I feel Jeff would be better off looking like Michael Hayes and randomly transforming into Willow on AEW television than this crap. It also feels like the teases of a feud between the New Day and the Forgotten Sons has pretty much died off and I’m predicting that the New Day will lose the tag titles to Nakamura and Cesaro just to simply further a storyline with them. Those teams will be tied up and I don’t think The Forgotten Sons will be back on TV again.

I know you can’t really fire a guy for his personal beliefs, but if nobody wants to work with him, what is his purpose on the roster? Other then that, it was an ok show.

You usually pee up to a line, and then the rest goes into a toilet. You don’t fill the whole thing up. You’d think WWE would know how to administer drug tests after all these years.

It’s been a moment. I want to say thank you to Andrew for educating the Postmarks like me in the past few weeks. Apart from Bryan/AJ taking the majority of the program up, I had a few thoughts.

Holy when the Main Event started, I thought Tucker looked like Rusev that I had to do a double-take. Ziggler somehow always finds himself to be the third wheel in a group.

AJ and Bryan had an excellent match and will probably be better than the greatest wrestling match ever.

The Backlash card feels sort of filler for me. What’s the excitement level for you guys?

The end of the Sheamus/Jeff Hardy segment was definitely written for the amusement of one man - Vince McMahon. SUCH GOOD PISS?!

Whole Hardy/Shamus angle has been in poor taste(pun intended), but I can overlook that for what has to be the best match of the weekend between AJ & Bryan.

Bryan and Styles was incredible, about as good as it gets on TV. I thought Cole and Graves were excellent on commentary in this match too. The only negative was the crowd, which I found annoying but great match.

Rest of the show was pretty bad. The piss test thing was just embarrassing