Leave us your feedback on Tuesday night’s episode of WWE SmackDown Live (and 205 Live if you stuck around and watched that too.)

Rank Tuesday’s episode of SmackDown Live on a scale of 0-10:

I’m going to guess Birmingham was still hung over from Alabama winning the college football championship last night, because dear God, did they not seem to care about watching some wrestling tonight.

I thought the matches that got significant time were fine, and the show didn’t drag, but the most interesting thing on the show was the Gable/Benjamin/Bryan segment. It was the first time Gable and Benjamin were outright heels, and I think they eventually found a groove and did pretty well. It’s probably the best I’ve ever heard Shelton on a mic.

But Bryan’s interaction was interesting: I liked how Bryan was the first to claim Gable and Benjamin had an issue with “management,” which both were quick to shoot down. It gives the sense of Bryan being overly defensive, if not delusional, regarding how he stands with the locker room. Also, between how extremely goofy he looked doing the “YES!” chant and how the camera showed him looking stone-faced serious when he left, I got the sense he was doing that very sarcastically, as if he’s just doing it to mock the crowd with how easily they’ll follow along.

I do worry, however, that the constant teasing of which Authority figure will turn heel may burn out the crowd and BOTH guys may be worse off by the end of this angle. While this crowd was pretty bad, both of them did seem far less popular than usual.

I rather enjoyed SmackDown tonight, another Bludgeon Brothers squash fest & most of the Royal Rumble card taking shape.

Question: Which Royal Rumble match do you see closing the PPV? Personally I think if you have Ronda in the women’s then it has to go on last, right?

This show sucked. They managed to get Ziggler-Esque mild reactions for Bobby Roode and Nakamura who used to be insanely over.

I thought tonight’s Smackdown show was decent. I thought it was easy to watch and that it flew by. My favorite part of the show was without a doubt the segment featuring Chad Gable and Benjamin. We have been asking for weeks now for WWE to give us any reason(s) to be invested in them and they finally gave them something to sink their teeth in. They were very entertaining in that segment! However, the main event dragged and it felt more like a house show. I am starting to feel that the payoff to this Bryan/Shane feud is not worth all of these throwaway matches but we should see.

I give this Smackdown 7 monitors on Sami’s back out of 10.

205 Live: I actually really liked the TJP freak out, giving him a little boost and some story to run with. Alexander-Enzo angle was good. The “title pillow” spot got a pop out of me. 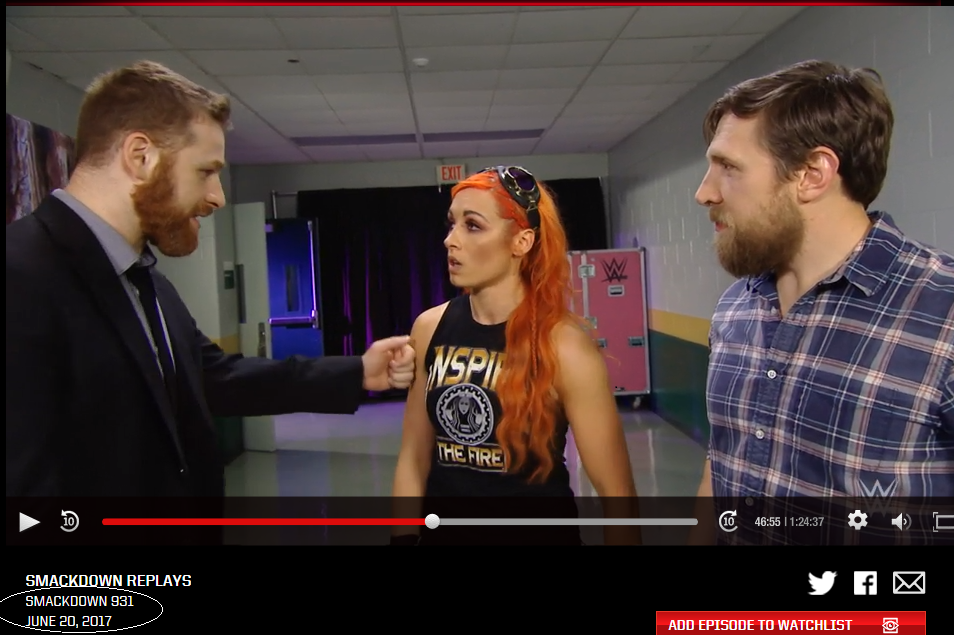 In a rare moment where men and women interact, Sami gave Becky his sympathy back when Ellsworth stole Money in the Bank. Today Becky was overjoyed to learn she’s teaming with Sami. You see, even tho he’s a heel, she’s willing to put aside her morals for Sami. This goes deeper. She even took advantage of Under Seige as an excuse to uncharacteristically act like thug. All in hopes Sami would see her in a different light. Becky’s in love!

What a beautiful tale.

An absolutely nothing show this week.
Thank God it was only two hours.
It really shows that when a crowd is not into anything it hurts the entertainment aspect of watching matches.
Not that there was any good ones tonight.
What was the attendance do you guys know?

I liked TJP losing it. At least he showed some sort of character.