Leave us your feedback to WWE SummerSlam from Toronto. 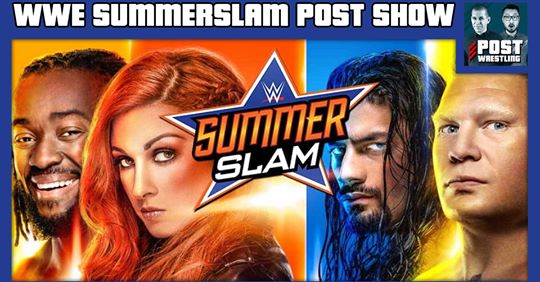 I’m just waiting for people to start complaining about Bray’s lantern being a decapitated head. It has to happen. Its 2019. People are already complaining about the neck snap. I thought it was all brilliant. The presentation was phenominal. I wish Finn got zero offense and Bray just murdered him, but I hope they dont blow it now, because he’s about the coolest thing on this show.

I know the coolest thing isnt Seth Rollins, thats for damn sure. He’s just so lame right now. I wish they had kept the title on Lesnar and built to Lesnar/Owens. Owens is easily the #1 babyface in the company right now. They actually should have built to that as the title match for this show. I think the atmosphere would have been off the charts. Since Rollins won though, I’d have liked to see the show end with The Fiend laying him out. They need to go all in on this character right now.

The true superstars of the night were the Scotiabank Arena crew who were told the pre show started at 6:30 so had to scramble to get everyone in fast when they opened the doors at 5pm. Despite the line I was at my seat at 5:15.

The show was exactly what I expected, a very good set of midcard matches with a glaring weakness in the main event section, especially given how Orton/Kofi ended and Seth Rollins essentially no selling his ribs.

Perhaps time aside I do feel the main event section was missing something with the Reigns/Bryan match being taken off, especially since they ran no angle and neither man made even an appearance. Baffling given Smackdown ended on that angle.

That said, Becky/Nattie and Trish/Charlotte were fantastic and Bray’s new entrance and music is incredible. Loved using the Mandible Claw as a pinning maneuver.

Very good show that could have been great.

Thank you again to both of you for an awesome Q&A, it was an honour getting to meet you both and talk about this art form I love dearly

First, nice meeting you at the live event.

I actually don’t have much to complain about the show itself, but I’m getting fed up with the Toronto crowd chanting for the sake of chanting (hated the ”Kofi’s Stupid” chant). I got further annoyed by a group of loud and drunk marks sitting behind me.

My favourite moment was actually the new/old entrance for Brat Wyatt, including the remixed metal theme and the severed head lantern. They are definitely doing The Fiend right (for now).

So, I only watched live tonight because my sleeping pattern is a trainwreck but holy crap was it worthwhile. I really enjoyed the whole card and nothing really dragged even if it was completely great.

Rollins and Lesnar had a match of the year contender in the main event and what might be the best match in WWE this year hands down; I absolutely loved it! And I hope one day, to find myself someone who looks at me like Paul Heyman looks at Brock Lesnar when he’s suplexing people into next week - I want to experience love like that.

Also, The Fiend is bad ass. I’m excited for what’s next for him.

Firstly, thanks for all the coverage these past two weeks in the face of an endless stream of wrestling. It’s been fantastic coverage all through July and August.

This show was kind of there. Becky and Natalya, and Charlotte/Trish were the standouts for me, Bray was great but there was a lot of filler on this show. It really feels like WWE lacks spark and originality right now - its remarkable how fresh Bray felt. Low lights were the Kofi/Randy finish and a lack of memorability. I don’t know what’s next, but I also increasingly struggle to care.

I don’t think Becky has gotten a reaction like she had tonight, since before Mania. Think about where the 2 women in the curtain-jerker were last year. Wow! Remember, sunglasses? Get well soon, Ruby Riott. Trish’s interview after Becky’s match was the most comfortable she’s sounded since 2006. Oh, Doug Heffernan is the King of Queens. I think she had the match of the night, while The Fiend had the performance of the night, and Goldberg made me howl. The only thing missing was Dolph flying out of his boots. Was there too much Shawn, though, in the promo pack before Ziggler’s match? Why not just show Monday’s angle? Also, did you guys see Brawn throw out the first pitch at the Jays game on Thursday? They showed footage of his dad when he used to play. Jays should think of picking him up. What would you guys do for a Klondike bar?

I was going back on forth on how I felt about the show for most of the night, but the last two matches solidified it as a thumbs up for me. Everything about The Fiend was perfect, including the fact that he uses the glove with “HURT” on it to deliver the mandible claw. Finn also did a great job of selling how terrifying this character is.

I thought Rollins was excellent in the main event. There were noticeable boos towards him during the introductions but he had everyone behind him by the finish. I loved the intensity of the match and hopefully Rollins can put his rough spring behind him and have a good run with the title.

Really my only complaint is that we’re probably going to get another boring 20 minute Orton match at the next PPV. But way more good than bad, 16/20 show for me.

What I’ve learned this weekend:

Bray can’t complain about Slipnot not doing his entrance anymore - the remix was fire!

Saskatchewan’s finest usually brings it, and he did during the main event, Rollins really good too and isn’t getting the respect I feel he deserves

While the city of Toronto was worth the price of admission SummerSlam itself was very middle of the road.

I got into the main event more than I anticipated and the Orton Kofi match was good until the bull shit finish but other than that everything was pretty meh. The match I like the least was Ember Moon vs Bayley outside of we want Sasha chants you could hear a pin drop in that place.

Overall ok show and slightly better than last years based solely on the absence of Baron Corbin but not as much of a fun live experience that Wrestlemaina was even if it was shorter.

I got to watch the show late due to work, but it was a pain to watch the Network anyway. I do like the WWE Network’s new design, but as I was told by the @askwwenetwork account on twitter, it doesn’t work with Chromecast yet. I’m hoping it will happen in the future. I even resorted to the Nefarious Means Network to see some of the show. It was ok. The two highlights of what I saw were the Fiend and Seth Rollins. The Fiend is obvious but with Seth, he went from being a babyface who was getting boos to getting massively cheered in the end based solely on his in ring performance. Sometimes it feels WWE puts way too much effort in having a creative team, when all you would really need is have one or two guys pitch ideas and let the wrestlers do the rest. Seth has looked like a goof for over a month, but it didn’t matter because of how talented he is. Imagine if he was outside of WWE and wrestling in the G1?

Since my mate James went to Summerslam 92 its always been our favourite pay per view. But what was this? A completely average show with nothing particularly special. I did enjoy Ricochet and AJ and for the first time in forever I think they actually got it right with Bray.
The best thing about this event though was it ending at 3:30am. Kicking my mates out of my house before 5 was a real joy. Thank you WWE. Otherwise - completely forgettable show

The network really affected my experience tonight. It kept freezing and fast forwarding the whole way through. Really wish they hadn’t updated the app right before a big show.

Fiend was the best thing to happen in the WWE this weekend. I loved it.