This Friday, we are reviewing WWF’s In Your House “International Incident” card as selected by Espresso Executive Producer @StillZub.

Please post any feedback, comments or questions associated with this event and we will get to all of it on Friday’s show for POST Wrestling Café members.

Watch this event on the WWE Network at this link.

Not a lot to say about a pretty mediocre card in retrospect, though at the time my teenage friends and I were ecstatic about attending it live…and I was heartbroken when I realised I was too broke to buy a ticket, let alone the right in view of hardcam seats my friends nabbed. They were pretty visible while I watched the Free For All Savio Vega/Justin Hawk Bradshaw match from home with other broke friends, and while it was the “Bruce is a jerk” sign which got Jerry Lawler’s attention and sent security their way, I’m pretty sure it was the “There is a bomb in the building” one which got their signs confiscated. What can I say: it was a pre-9/11 world. 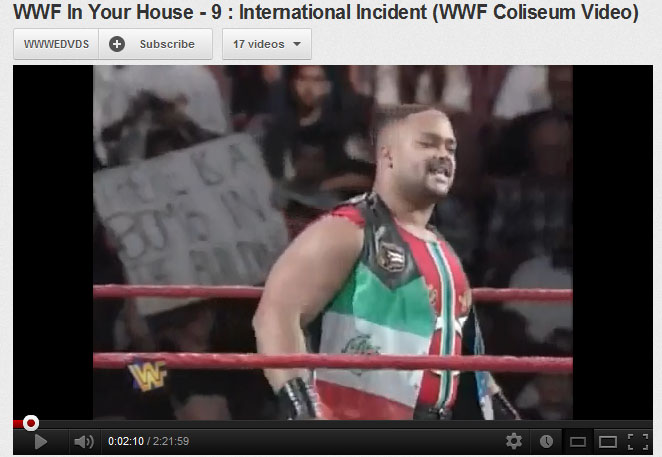 I was actually at this show. Can we nominate Vancouver for some of the worst cards ever? We had this show, IYH: Rock Bottom and New Blood Rising.

I remember the Saturday before the show they had a fan-type event in a park near Science World that saw Sid and Ahmed Johnson (HBK no-showed) hype up the show on a stage with Dok Hendrix.

One of the biggest disappointments was Jake Roberts no-showing. He was supposed to be facing Mankind and I remember the crowd being pissed off because they announced it basically that night. As a result, no one cared when Henry Godwin came out.

Austin not over at all, and the crowd had no clue who to cheer for in that match.

The Mankind ring spot was unique and felt really fresh at the time, big reaction for that.

The main event was a lot of fun, and Owen Hart was insanely over like he always was in Vancouver. HBK was also incredibly over, as was Sid.

When I first got into wrestling I rented or bought as many tapes as I could at the time but even back then this card never appealed to me and looking back at it, the show was a little doomed before it started. Warrior had to be replaced by Sid and reading the other feedback I saw that Jake Roberts no showed. 96 was the year that Shawn Michaels was on fire in the ring but it was still a relative low for the company. For me, I think the company found its footing in 97 and 96 was them recovering from 95 (sorry Wai, know you have a soft spot for 95).

Not a great show when the highlights were the commercial for Summerslam and the length of the show. Sad to see 50% of the main event are passed away. I cant help but wonder what dog name their team would be given, if they were around in 2018. I was hoping Jose Lothario would get the Vader Bomb or something.

Brandonfrmnj aka the only Brandon

Great pick this week it was an easy watch hope this gets through to you. Been trying hard to get through but apparently customs won’t let my emails cross the border.

Hear me out what was the big deal with ahkmed Johnson he was the bre bella of the attitude era. Always hurting himself and people what a reckless oath.

Vader beating Shawn felt like a big deal leading into Summerslam but apart from that this was a nothing show and one of the weakest In Your House offerings, Austin vs Mero was ok but not as good at the KOTR offering the previous month and the rest of the show was forgettable.

All the matches were fine except for the first one which went on for too long. The show is not as bad as some people are making it out to be. Maybe I am just too nostalgic since I was 9 years old at this time and had been watching WWF since I was 4 years old.

Foley took such a crazy bump into the concrete but it never gets mentioned / appreciated. This bump was not too far off from Foley falling off the cell. But it is just one of the many crazy bumps that people don’t remember.

Watching Shawn in the ring at this time is just amazing. Did you see that beautiful slide into the ring when he came out to stop Vader leading up to the PPV?

Sid was very over at this time. He seemed like the top guy in the company.

I was at this show live as an 11 yr old kid. Sat 9th row, right along the guardrail (same side where the rail collapsed during Shawn’s entrance, about 2 panels back). The show was cool at the time, holds up alright. I liked Austin/Mero more than I remember.

Post show, I went for dinner at the Old Spaghetti factory in Vancouver. Just ordered food when my Mom points out that Owen Hart just walked behind me and sat down. He was with Martha and a guy I didn’t recognize at the time but realized years later was Carl DeMarco. I was a bit intimidated to approach but I was wearing my Calgary Hitmen jersey and thought that would be a safe ice breaker. Owen was really polite and signed my match card from that night, commented on the jersey. I said thanks and went to walk back to my table; Owen said “where you going? Pull up a chair for a minute”. He let me sit down and ask him a million questions, went through that nights program with me, made fun of the Ultimate Warrior a ton (he was on the cover of the program but obviously not on the show) and just generally provided me such a great experience. I never forgot it, he was so incredibly kind. I’m a 33 yr old wrestling fan now and still remember this so vividly. Happy you guys are reviewing this, I remember that interaction so much more than anything on the card.