This show was selected by Espresso Executive Producer @andrewisgood.

The show will be released on Tuesday, October 27 for all members of the POST Wrestling Café.

Leave us your questions and feedback on the event, which can be watched on the WWE Network. 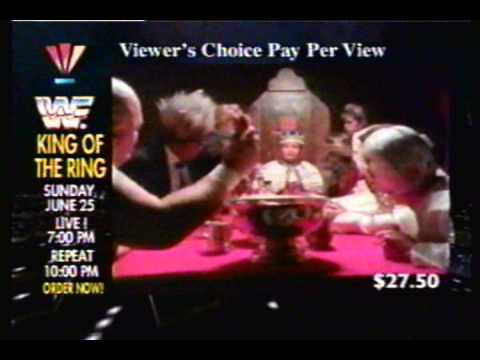 The booking from this era baffles me. Why have your dominant King of the Ring winner get a bye? If someone had to get a bye to the finals, Savio Vega makes much more sense than Mabel and it would have benefited both of their stories. Bob Holly was a highlight of this show, but I’m disappointed we didn’t get to see Mantaur in action. This show featured way too much foot, but it did feature a few of my guilty pleasures: a Sid Vicious promo, the crowd chanting another company’s name, and shitty illogical booking.

Overall this show is awful because nobody felt like they got more over. Mabel may have won the tournament but he had a bye and there was interference in his first round match. Kevin Nash, your world champion, wins because his opponents tag-team partner abandoned them. Jeff Jarrett, your intercontinental champion, lost in the first round. The tag team champion in the tournament loses via countout. None of the matches were must-see. At least Savio didn’t get a gimmick change and become Shorty V, but it seems him making the finals didn’t lead to anything.

To anyone that didn’t watch this show, you made a good decision. this show gets a 2/10. However I do love bad wrestling, so this was a fantastic pick. Thanks Andrew!

question: Mabel didn’t look too bad in his matches, what would you say is his best match as the Mabel character?

I had the desire to see this show when it happened because it was in nearby Philadelphia, but boy am I glad I did not actually attend it. Saddled in between two cheaper and (to my recollection) stronger In Your House PPVs, this show was a real bummer, from Razor Ramon being pulled out, to Shawn Michaels not making it past the first round, to the eventual winner. To think Austin 3:16 was a year away. The best thing to come out of this show for me was, over twenty years later, a Facebook friend having a running gag over Savio Vega, putting forward these long statements that always ended with the unrelated question asking if things would have been better if he won KOTR '95.

ADDENDUM after the show has likely been recorded, a sample of my friend’s Savio Vega joking, that he managed to get into an issue of Howard the Duck:

From watching this show it’s really not hard to see why business was down in 95. Bad matches, bad promos, a tatanka main event and Vince saying “I wonder if Bret’s toes taste like chicken” make this one of the worst shows I’ve ever seen.

Not only was the roster terrible at this time, the good pieces they did have were not used well on the show at all. Michaels drawing with Kama, Undertaker losing to Mabel in the first round and Bret putting his toes in Lawler’s mouth. No wonder the crowd were chanting for ECW.

The worst part of the show though was the racist segment with Michael Hayes pretending to translate Savio Vega and saying that he was going to steal some hubcaps.

Why can’t PPVs start like this nowadays? I would love every event to begin with Vince shouting American history at me over establishing shots of the city.

You guys first reviewed this show way back on the 27th of September, 2009. I hope today’s review is nothing like that one, done over the phone with Wai, with John only having access to a booth for 18 minutes, with no notes. John called it your, “Worst review ever”, (though John did concede that title was not particularly meaningful given that it was only the third ever episode of Review-a-Wai).

However, I wonder if this time, as then:

All in all, if any review deserves to get redone, it’s this one.

ADDENDUM after the show has likely been recorded, a sample of my friend’s Savio Vega joking, that he managed to get into an issue of Howard the Duck:

That’s incredible. I actually feel like I may have read that issue. It’s the Chip Zdarsky run isn’t it?

Yep! Issue #5 of his initial run (before a longer run that came a little later). My friend Peter is a big fan of Chip, and these Howard comics made me a fan of his as well, picking up several subsequent comics he’s written (he’s doing Daredevil now, far more dramatic).

It was a really funny series. Pretty sure I’ve seen him locally. Only Toronto comic book person I’d recognize.