On Rewind-A-Wai #68, Wai Ting and I will be reviewing the WWF Royal Rumble from January 2001 in New Orleans, Louisiana.

Espresso Executive Producer Ian Kushner let the listeners choose a Royal Rumble event and this was the winning choice.

Post your feedback and questions related to the event in this thread and tune into the show on Tuesday, August 18th with all Cafe members having access to the show.

Your number one fan from Australia, Matthew Winter.

Managed to watch this show after a long week at work, and man, I’m sorry, but starting your Royal Rumble with Jeff Hardy and Bull Buchanan? What a huge mistake. I love Matt and Jeff, but when I hear teenage girls in the crowd screaming when they take their shirts off and THAT’S your biggest pop so far? I feel like you’ve made a mistake. I’ve always felt nostalgic about the 2000-2004 era, but this year’s Rumble match felt like there were a true lack of stars, or at least, a true lack of guys who you realy thought could win. Sure, it did have entertaining moments. But having names like K-Kwik, Crash Holly, Drew Carey and anyone from Right to Censor filling out the 30 men doesn’t leave me fulfilled. 6/10.

Dustin from Maui,
Aside from the 1992 Royal Rumble, this Rumble is always the show that I’ll go back and rewatch. I love the drawn-out storyline with Austin getting attacked by HHH, and still willing to fight a healthy Taker and Kane, in the ring. The stare-down between a busted-open Austin and the Rock was ridiculous. It also led to this promo… 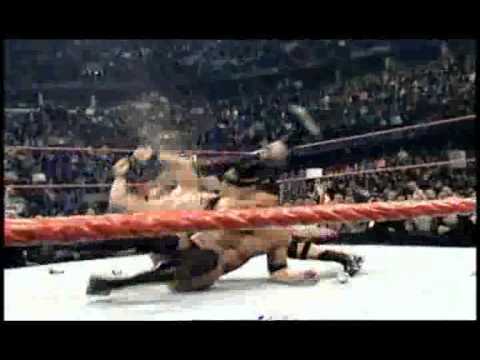 Thank you to Mr. Kushner for letting the people have a say in this one and thank you to the people for choosing the 2001 Rumble. According to my records, it was the only Rumble of the four that you lads had not previously reviewed.

Benoit vs Jericho was probably my favourite match ever before I discovered New Japan in 2013. The suicide dive into the chair shot took my breath away, but now it’s hard to watch. It’s really hard not to think about what all those chair shots might have contributed to on June 24, 2007. But in 2001, I loved this match unreservedly.

Question: What was up with the title match?
I was watching at the time but I can’t recall how the hell they got to a heel-heel title match. Wouldn’t it have made more sense to just have The Rock beat Angle here as opposed to the next PPV? Were they trying to swerve people? Trying to give Angle an extra month as champ?
Or, as I suspect is the true answer, was this championship feud merely a vehicle to push the Trish-Steph storyline? It seems like a grave abuse of the title, but let’s be honest: that crowd was pretty quiet until the cat fight spot.
Tbf, I like the occasional heel-heel match, it makes it seem more legit. And as Pollock has pointed out previously, you can get away with different title matches at the Rumble.

This show was memorable for me for two reasons:

One - To this day, the Jericho v. Benoit ladder match is still one of my all time favorite matches. Although knowing what we know now about Benoit, it’s difficult watching that suicide dive/chair shot. I thought the Walls of Jericho atop the ladder was the most innovative ladder match spots I’d seen at the time.

Two - during the day of the show, I was working in a hotel installing flooring tile in several of the rooms. The Canadian pop group The Moffatts were in town for a show and I randomly met one of the band members while I was carrying a box of tile through the hallway. If I remember correctly, we had an insane snow storm that day that ended up canceling their concert and our satellite feed for the Royal Rumble was spotty at best that night.

I hadn’t watched anything from this show before, so I’m happy this show was the one selected. Jericho and Benoit put on a classic ladder match, but it was hard to watch at times. Seeing Benoit perform a diving headbutt off the ladder and miss was excruciating to see, as was the outside dive where Jericho caught him with the chair. I’m glad brutal ladder matches like this aren’t pulled out often, but Jericho and Benoit were two perfect people for the role. Drew Carey played the likeable dork well enough but I’m still surprised it was enough of a role to land him in the WWE Hall of Fame. I loved seeing the parallels from this show to today’s pro wrestling landscape: JR on commentary, Jericho cutting great promos, and Jeff Hardy and R-Truth wrestling. My biggest complaint was the overbooking of the world title match, Angle came across as a weak champion and the world title felt secondary to the Triple H/Stone Cold feud. I can only imagine how exciting this show must have been to attend live. Any WWE PPV that’s less than three hours gets a pass in my book. 7/10