Today’s results have made the B Block math very simple. Going into the final night, Okada and Jeff Cobb are the only two participants still alive and will face each other. If Okada beats Cobb, he wins the block. As long as Cobb doesn’t lose to Okada (which includes a draw, a double count-out, or a double disqualification) then Cobb wins the block.

Today is the first day of the entire G1 that contest leader Zack Smith scored less than 3 points. This has narrowed his lead to 2 points going into the last two shows. Could we see someone else make a last-minute surge and unseat Zack who has been alone at the top since DAY 3?

By contrast in the C Block, Kate From Montreal has continued to grind out wins and has now separated herself from Brad The Archivist by four points. There will need to be a big swing over the last two shows for Brad to have a chance at winning the C Block.

Below are the current point standings for all of the wrestlers in the G1 in their respective blocks.

Below are statistics showing what percentage of listeners, as a group, correctly predicted the winners of today’s matches. Winners are in bold.

A pretty weak day for the entire C Block.

So for the last two shows there is enough difference in Kate and my picks to flip the standings. Hold the engraving for now. 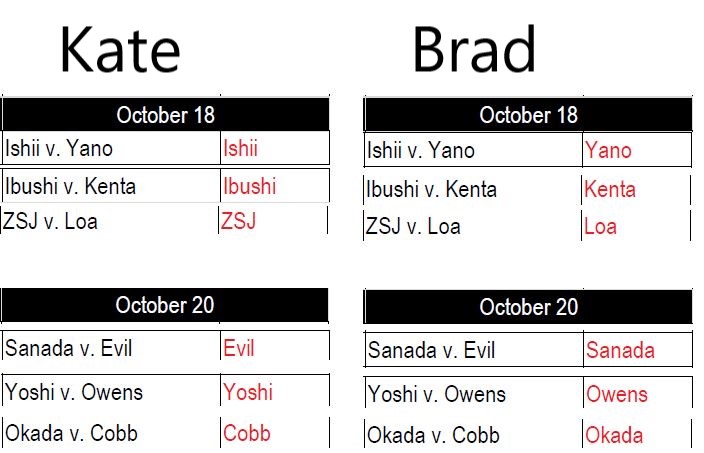 Gonna need some G1 math on these scenarios.

Well, with @katred ahead of @Brad_The_Archivist by 4 it’s quite an uphill climb for Brad. Those six matches are the only ones that can change their relative positioning. Since they picked the same winner for the other four matches, those results won’t change anything between the two of them since they’ll either both get the points or both not get the points. Brad has to get all six of the above winners correct to overtake Kate. If Brad gets five correct then he and Kate will tie on points and we’ll need to go to tie-breakers. If Brad gets four or fewer correct, Kate will finish the contest with a higher score than Brad.

Run the table, got it.