Matt Tremont and Atsushi Onita had the first-ever successful Explosion Match in American History. The match did not disappoint in the slightest as we got what we were promised, an authentic FMW Explosion match with two icons of the sport.

Since its founding in 2016, H2O Wrestling has held many notable events but nothing will come close to Destiny. This show featured a menagerie of different types of matches headlined by Onita vs. Tremont. H20 is a story-heavy-based promotion and this event featured another installment in the 440H! Vs. H20 storyline, which will be culminating later next month at ‘Last November’ with Matt Tremont vs. Rickey Shane Page for the H20 Heavyweight Championship.

The undercard featured matches involving various H20 wrestling center graduates, some defending their titles, others using this stage as a showcase of their talent. As good as the undercard matches were, this show will be remembered for the main event. The atmosphere in the Trenton Thunder Ballpark was electric as the fans waited in anticipation for history.

The show started off with a showcase of some of H20’s notable graduates; two nights prior Adrian Valerio won the first-ever Hustle Cup and he’s looking to keep that momentum going tonight. Ryan Redfield took H20 Heavyweight Champion Rickey Shane Page to the limit this past Friday, ultimately coming up short against the leader of 44OH! This was a fun opener that featured four of H20’s biggest stars, each man got their time to shine within the match with Ryan Redfield eventually claiming victory.

I haven’t seen Bobby Dempsey since Nigel was in Ring of Honor so this was a nice surprise to start our second match of the evening. Along with Mike Quest, commentary notes that Bobby Dempsey is one of the main trainers at the H20 Wrestling Center. The match starts off with various tests of strength spots before all competitors start exchanging strikes. They did a fun conga line of sleeper holds with the ref eventually hitting a stunner breaking up the hold. This was something right out of PWG and the crowd ate it up. Bradley hits a huge top rope splash for the victory.

Last night, Kennedi Copeland won the first-ever Matt Tremont Deathmatch Tournament, outlasting 16 other competitors to take home the biggest win of her career. It might have been the biggest win of her career but it wasn’t her best match, at all. Tonight she defends her H20 Hybrid title against four of the toughest women competitors in Indy wrestling. Mickie Knuckles has the experience advantage among these competitors having spent the past 18 years wrestling on the independent scene and is a former Queen of the Deathmatch. Mickie is probably most remembered from her short run in TNA under the name Moose. Each woman pairs off, while Masha Slamovich chills on the ropes like Eddie Guerrero. Kennedi Copeland goes for a trust fall only to be run through by Mickie Knuckles with all 4 women crashing outside the ring. Masha hits a flipping senton onto the pile, rolls Mickie back into the ring for a two count. Catal goes for a sunset flip only for it to be countered by Slamovich who paint brushes Catal’s face. Catal’s job in this match is to take most of the offense, that being said Kennedi took multiple stiff shots to her head that left her wobbly on her feet. Kennedi catches Kasey Catal with a jackknife pin for the victory.

The match starts with 4 competitors in the ring, all of them enter to Hungry Like The Wolf, which was Danny Havoc’s theme song, as the crowd breaks into a Danny Havoc chant. Sean Henderson handcuffed Brandon Kirk to the top rope, which doesn’t make much sense as now it’s impossible to eliminate Kirk. The crowd erupts as Northeast wrestling legend Low Life Louie makes his way to the ring. The ring is pretty filled up by this point with most men taking a street sign that Crazy Ivan brought into the ring. Somehow Brandon Kirk uncuffed himself and is now free to roam about the ring. Casanova Valentine looks like Chris Stanley from the Bennington Show. Chainsaw Tony came out as the Wildcard of the match, true to his name he came out wielding and revving a chainsaw. Bam Sullivan is going to be a breakout star, he has the athletic ability to transcend the Deathmatch world. The final four competitors are Brandon Kirk, Chainsaw Tony, Connor Claxton, and Kaide Lothbrok. Kirk Eliminated Claxton, Claxton pulled Kirk to the floor as Chainsaw Tony and Lothbrok started exchanging blows as the final two competitors.

Post Match: Lothbrok and Chainsaw show each other mutual respect as Kaide gets to wield the chainsaw. Chainsaw leads the crowd in a Hoska chant as we go to intermission.

They have routinely attacked Matt Tremont’s students, skewering Sean Henderson, and throwing G-Raver at Tremont, which caused him to fall through a car windshield.

The crowd erupts as it’s announced that SHLAK is the surprise 6th member of Team H20. The match starts with Chuck Payne and Attius Cogar, Atticus provokes Lucky 13 who gets the tag in from Payne, Atticus tags out to Eddy Only as the match finally gets underway. Lucky gets a near fall on Eddy Only as Only tags in Greg Iron. Iron starts working over Ron Mathis only to get outmuscled by the former H20 Champion. RSP, Eric Ryan, and Bobby Beverly bail to the floor as SHLAK hits a suicide dive as the match breaks down. SHLAK is easily the most popular member of his team. All members of 440H are deathmatch experts but in this match, they are showing off their technical wrestling acumen. They continuously work over Jimmy Lyon until Markus Crane, who is returning from a life-threatening non-wrestling-related head injury comes out and makes the save for Jimmy Lyon. SHLAK gets Greg Iron up on his shoulders and Markus Crane hits a top rope DDT, they throw Lyon on top for the pinfall victory.

It was a year ago when Marcus truly broke out on the scene with his match with G-Raver, and one year later with a year of growth under his belt these two face off again, but this time they both have reinforcements. Other than working GCW shows, this is the biggest stage Marcus Mathers and Austin Luke have competed on.

Earlier in the day, Marcus Mathers posted the following on his Instagram: 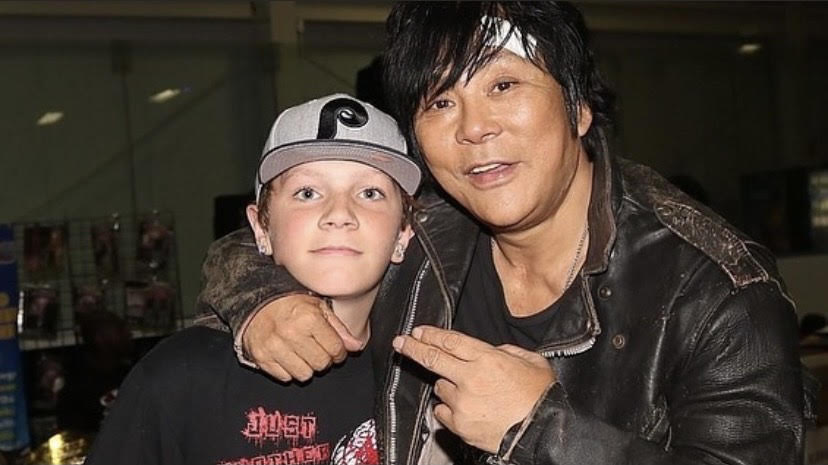 My 8th-grade graduation present was a ticket to go see Matt vs. Onita. Fast forward a few years later…the same year I graduated high school, I’m on a show with Onita. It’s my destiny. Tonight is gonna be a night I and everyone will never forget. Let’s Fucking Go!!.

This is Austin Luke’s 4th match of the weekend and this is Mathers’s 3rd match of the weekend, these two are some of the brightest stars H20 has produced thus far. G-Raver and Jimmy Lloyd were the ones who brought the GCW Tag Team Championships back from Mexico, only to lose them to the Second Gear Crew on their first title defense. Raver and Lloyd have also had one of the best deathmatch feuds and series of matches this year. From The Glass Ceiling Match to their classic No Rope Barbed Wire match these two have set the standard for Violence this year.

Both teams start setting up various structures of doors, G-Raver throws a ladder into the ring but he is unable to use it as Luke and Mathers regain their advantage. Mathers holds Jimmy Lloyd in the corner with a chair while Austin Luke goes coast to coast. Lloyd has Mathers on his back as G-Raver comes off the top rope springboards off Mathers back into a Meteora onto Austin Luke. Jimmy Lloyd hit a DVD through a door for a near fall. Luke and Raver climb the ladder, Raver hits a Meteora off the ladder through the doors at ringside. Jimmy Lloyd is all alone in the ring as he and Mathers go after each other. Mathers hits a cutter for the pin only to be broken up by G-Raver. Lloyd hits Mathers with a Dude Buster onto open chairs for a two-count. Mathers powerbombs G-Raver onto the ladder for a two count as the crowd gives them a standing ovation. G-Raver hits a JDriller on Mathers for the victory.

Post Match: Austin Luke hits a lariat on Mathers as the crowd boo’s him out of the ballpark. Austin Luke continues to stomp on the head of Mathers leaving him for dead in the ring.

Adding to the importance and feel of the main event, the ring announcer is the legendary Emil J. Journey hits and the crowd goes nuts; for the first time in a year and a day, The Bulldozer Matt Tremont makes his way down the aisle for a match. The biggest match of his career. Wild Thing starts blaring through the speakers as Onita makes the slow walk to the ring for this epic encounter.

Before Emil J can introduce the competitors, Onita goes after Tremont with a barbed wire bat busting Tremont open. Onita breaks a chair over Tremont’s head barely taking Tremont off his feet. Onita grabs a light tube bundle breaking them over the skull of Matt Tremont as the crowd chants one more time. They bail outside the ring as Onita throws Tremont up against the backstop. They make their way back to the ring as Tremont gets the advantage on Onita, picking up a bundle of tubes breaking them over the skull of Onita. Tremont starts carving away on Onita’s forehead with broken tubes. Tremont sprays red mist into Onita’s face who is unphased as he grabs a bundle of tubes and breaks them over the stomach of Tremont. Onita is now on the outside of the ring as Tremont is pushing Onita towards the explosive barbed wire that is set up on the floor.

Onita hits the red mist onto Tremont as he shatters more tube bundles over the Bulldozer’s body. Onita keeps working over Tremont with the barbed wire baseball bat, grounding Tremont. Tremont is pushed onto the barbed wire as a GIANT fireball engulfs him and fireworks go off. They pulled off the first explosion beautifully. Smoke fills the screen as the Bulldozer is completely wrapped in barbed wire. Onita throws a fireball into Tremont’s face for a two-count. Onita signals for the Jado rocket as he grabs an exploding light tube bundle for a two count. This was the first-ever exploding light tube spt I’ve ever seen. Truly mesmerizing to watch.

Onita places a barbed wire board in the ring, DOUSES it in lighter fluid and he sets it ablaze. The ring is now on fire as Tremont gets hip tossed into the flames. Onita pins Tremont in one of the wildest scenes I’ve ever witnessed in a professional wrestling ring.

They did it. They pulled off what others couldn’t, they had a successful exploding barbed wire deathmatch. Tremont is burned and bloody as the two men hold each other up in the middle of the ring. A truly legendary moment. Onita grabbed the mic telling the crowd that he loves deathmatches and that next time there will be even more explosions.

Ah yes, that Duran Duran classic “Hunger Like a Wolf.”

I had no clue Marcus Mathers was that young. I’m pretty new to H20 and I just saw this guy for the first time last weekend when Inter Species Wrestling brought their Big Dumb Block Party to the H20 Wrestling Center.

Glad they had a successful show. Certainly sounds like it.