How to fix the wwe's problems

Simply put, we all know that the current product is crap, a lot of lower tier talents are miserable and ratings are at a all time low.

They also think that the wild card will fix everything which it won’t. We all know that it’s just a band aid fix like they always have lately.

So here my take what wwe need to do to fix the product.

That’s pretty much the five major points i think WWE need fixing and that’s start with the mcmahon’s and the way they see wrestling, if they gave more freedom to the to writing staff and talents and change some of the way they train talent and go back to the old way of dealing with talent, you will have a better wwe, but until vince and HHH changed their ways, wwe will always have a crappy product.

Get rid of the writers and go back to long term booking.
No scripted matches, call that shit in the ring based off the crowd reaction.
If its called in the ring you dont need road agents in the back putting otgethr matches, You just need 1 or 2 guys to give the finish and that could be a booker and a booker’s assistant.

But I am real old school so what do I know.

There isn’t an easy fix, one or two things went wrong type of thing. There are many, many things that are messed up that we aren’t aware of. So, I’ll just pick a few things
1: have better storylines.
Have them make sense. Have consistent characters. Have some sort of payoff to fueds. Make us care about the people involved. AND STOP MAKING EVERYTHING A FUCKING JOKE!!! This is supposed to be violent and dangerous, but we get fart jokes…
2. Have wins and losses mean something.
If the booking doesn’t reflect that winning is important, the talent will reflect that winning isn’t important, then the fans will see that winning isn’t important; so why would anyone watch? The entire point of a match is to win, but you’ve eliminated that.
3. Build stars. Build characters. We’re suffering from the inability for anyone to beat John Cena a decade ago. There’s no huge nostalgia guys except the same old attitude era guys they keep dragging out to diminishing returns. And now, if you had to describe the talent, you’d be at a loss. Describe 5 characters to me
4. Change the God damn format. We always have a monologue to start the show. We have evil authority figures. We jokes that only Vince likes. We have scripted promos. We have builds to PPV’s that follow the exact same script, just with different people in place.(the contract signing trope, the 2 enemies on the same tag team trope, etc.) Try doing something different.

The big four PPVs, money in the bank and one other are dual brand. The remaining six are split between raw and SD.

I think it’s an insanely impossible task to ask anyone to produce decent wrestling at the current pace the WWE demands.

So to clarify, you want smackdown to be cut down a half hour? Even with it being two hours ot feels like it flies by for me most weeks.

I could live with two hours but I was sorta thinking 90 w/ no commercial breaks but that’s not going to happen any time soon.

But two hours too long every week to expect good storytelling, at least it is for the WWE.

12 PPV are to many. This is not enough time to properly build fueds.

But with the roster depth, you can have fueds being built for months without being on every PPV. It might take a skilled writing staff, but what the hell are they paying the writers for?

To write scripts that on the day of or up to an hour before the show Vince throws out and re-writes on the fly. (See Wild Card Lars rule from Monday.)

I feel the the top 2 problems are
1.) Putting the top guys/girls on every week. I understand waning your big attractions to drive ratings, but it eats the time needed to build up every one else.

2.) Top guys being on top too long, and protecting them. This makes it hard for young guys to get to the top if they always lose to the established stars. 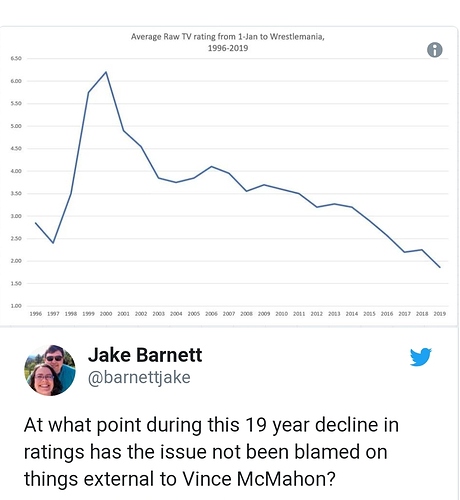