How to get someone over 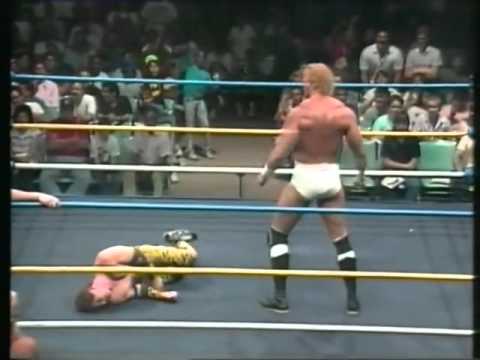 I loved the idea of jobber squash matches; they added more muscle to the PPVs.

No doubt that this works, but if Raw, SD, or Dynamite did this for the majority of their matches in 2020, would anyone watch?

If nobody watches, their revenues tank.

I think they all should start doing more of this, but it can’t go back to the days of WWF Superstars.

WWE was doing a lot of jobber squash matches over the last year under Heyman’s control. Remember the East Hampton Polo Boys? If you look back at the results I’m pretty sure the Viking Raiders went three or four weeks in a row squashing random jobber teams.

I think for just showcasing a guy/girl/team it makes a ton of sense to do these quick matches full of impressive offence, but it’s very easy to over-do it. Logically, your best wrestlers shouldn’t be killing random losers every week; your best workers should be going up against the best competition.

100% agreed. It can work in moderation, especially with new talent. Look at how over Ryback got doing squash matches.

It’s also a great way to have your main event matches feel fresh and exciting. The main point of their television programming is to push your audience to buy the PPV by having your two pushed stars beating enhancement talents for weeks, building to an eventual match.

“Jobbers” are essential is what I’m saying.

Exactly. The big cards (not PPVs) haven’t been special for 20 years as by the time they roll around we have seen the matches god knows how many times. I’m not saying you can have real jobber matches (unfortunately the toothpaste is out of the tube and it ain’t going back in) but the top guys should be steamrolling the lower cards guys, not going toe to toe for 20+ minutes with them (AEW take note).

Not every match needs to go that long. Especially when the participants aren’t capable of executing a match that long. I mean wtf was that Dynamite main event all about other than an arrogant vanity match?

Btw, how good was Lance Russell. Both he and Bob Caudle are incredibly underrated announcers.

WWE’s use of jobber matches with indy talent are somewhat counter-intuitive.

In theory anyone on the roster should beat local indy jobbers WWE uses. There really shouldn’t be anything special when Ryback or Viking Raiders do it. But because it’s unusual booking for WWE it tells the hardcore audience that this is someone they want to strap the rocket too and are invested in maintaining a winning streak.

The actual performance is secondary. I don’t remember anything special from those jobber matches. Just that they went on winning streaks and were built up in the eyes of the audience only to lose championship matches in screwy ways and loosing all the momentum they had built up.

Maybe if we’re talking the smart marks, but I think it works for the casuals.

It worked for Goldberg. It worked for Strowman. It works, but only if they commit to giving a real push to someone. And that’s where they continually fail

This is old school thinking

For AEW maybe that’s partially true but right now especially for WWE it’s far better to pop a rating on Monday and keep ratings high then it is to sell a new network subs. It’s a ratings driven business in terms of revenue. They would rather have higher ratings and lower buys any day

Yes, but their rating are low because they don’t have any attractions that are presented as stars that people will want to pay to see or in this case, watch.

I’m not saying that they should never have their “stars” face off against each other, but is should be sporadic. If you have two guys (or girls) who are showcase as strong, unbeatable forces and have them kill guys for weeks leading up to an advertised match to see who will win and that there is an actual winner then if done right can get the higher ratings and eventual higher buys.

Yes no doubt they could do a better job. Other than the Roman vs Jey program the rest seems dull and boring. However it does show you how you can make a guy like Jey fairly quickly if you book him right. Wish they did that more often