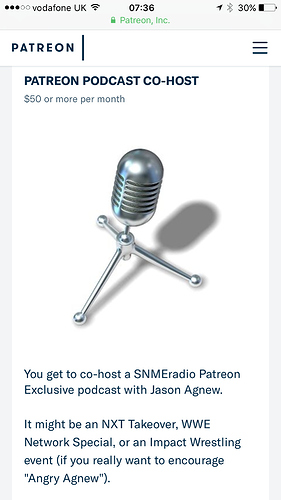 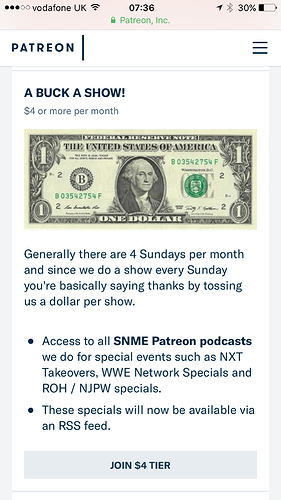 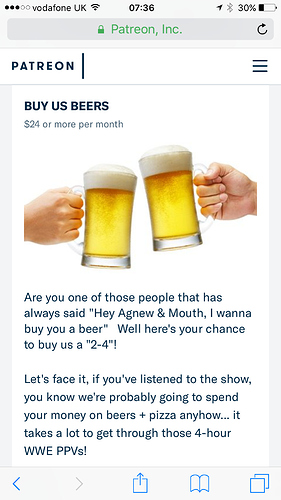 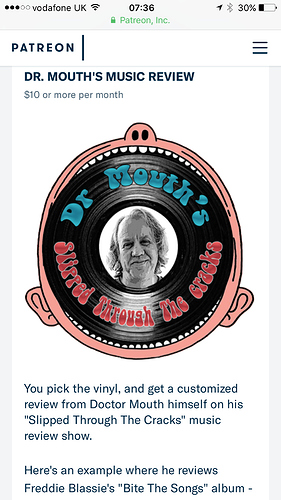 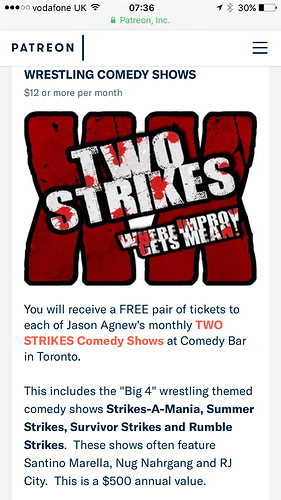 I’m gonna pass. I listen to the show, but to pay just to have Mouth on, is a bit much. I like Agnew, but John & Wai were always my favourites. I’m willing to pay for their hard work, up to date news and fun, witty banter. Agnews show is just a nice wind down at the end of the week, with news we already know about.

Besides, it does seem like he’s used his show on multiple occasions to take shots at POST Wrestling. So if that is the case and they were shots, I don’t really have a desire to support that. I’ll wait to see if any of the guys ever officially address it, before I give any money to Agnew. I know I’m not the only one that has taken notice of this.

The LAW was something I started skipping big parts near the end of its run, like you it was John & Wai that pulled me over and kept me. When POST wrestling was announced it was something I signed up for as soon as I could as I knew I wanted to support them. When I read this news I didn’t even think about signing up to be honest. I do like Mouth but Agnew was a bit hit and miss to me.

I never liked Agnew. He was rude and antagonistic to callers and overly negative.

There seems to have been a falling out with John and Wai too given they don’t answer questions about it on Ask A Wai (totally their prerogative not to, not complaining).

What shots did he take? I remember him and Mouth being a guest host on one of the first Post Wrestling Round Tables if I’m not mistaken.

I found Agnew to be an OK personality foil for Braden Herrington on their old NXT podcast, but never got too into The LAW. I thought Agnew’s rude and antagonistic personality was a bit of a work for the show, but maybe it wasn’t. Mouth’s voice also kind of annoyed me. It always sounded like he was screaming into the mic, but he did have a lot of knowledge on wrestling.

There have been a couple ads during the SNME shows, that make reference to POST. Things like “this is not a POST show” or things about being cheaper than a cup of coffee, which is key to the POST wrestling cafe branding. It could be nothing, but as always, people speculate. That as well as John & Wai not answering stuff regarding it. It’s not our business, I don’t know why people feel the need to ask them, but something is clearly going on.

Hmm, definitely not our business to dig any deeper into a potential “beef” if John and Wai aren’t comfortable talking about it.

On a different topic, John and Wai’s Patreon tier format seems to have now been copied by several pro wrestling podcasters. I feel like POST Wrestling gives you the most bang for your buck out of them all. You can get a lot of bonus content even at the lowest $6 monthly tier.

Has anyone seen the Patreon monthly pledges for Bruce Prichard’s show? He’s charging $149 a month for the highest tier. Maybe I’m being too judgmental, but that seems insane. Appreciate John and Wai keeping their tiers affordable and offering top quality content.

That’s insane! And just plain greed. I love the system here. Its creative, rewarding. I feel the guys are grateful for everything and work way harder than they need to.

I dont know that he isbut I would bet he is doing it has a rib. I had to stop listening to Ravens podcast cause it seem way to unorganized.

Has anyone seen the Patreon monthly pledges for Bruce Prichard’s show? He’s charging $149 a month for the highest tier. Maybe I’m being too judgmental, but that seems insane. Appreciate John and Wai keeping their tiers affordable and offering top quality content

Those levels are a bit too high for me to even consider but some of the rewards are appealing. I would love to see the show notes.

Wai responded to someone who had been trying to get them to comment about Jason Agnew and Wai wrote him back and said he apologized for not responding to his question on their monthly Q&A’s but they weren’t comfortable talking about that subject at this time so there is obviously something there between the 3 of them and I’m sure when Wai and John are comfortable talking about it, they will

Some patreon levels are clearly jokes, I know that the Going in Raw patreon have a level that is a 200,000 that would result in one of the hosts 2 sweeting the other because he said he never would. But the tier also starts with “This is a joke tier”.
That does bring up another point though, one of Agnew’s tiers is clearly designed for local listeners (the comedy shows). It does limit patreons as it’s one of the cheaper tiers but you have to be there to take advantage of it.

Agnew did compare John & Wai to Arn & Tully, that sounds like a pretty big compliment. 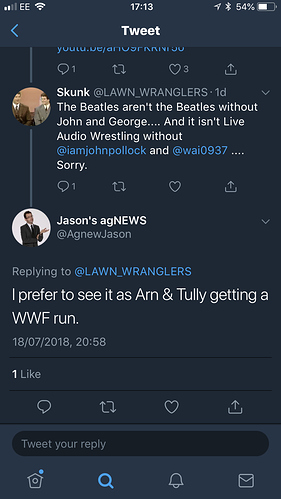 If there is something wrong between them fair play to John & Wai for not having a dig back.

I did listen to Agnew’s first episode of his new show but I was always a bigger fan of John & Wai but I do wish him and the others the best of luck.

Good on John and Wai for being above it. I was a little bothered when I heard the first episode where he says “It’s less than a cup of coffee”,

No one is interested in paying to hear The Mouth it seems.

New update according to Agnew, starting with Summerslam the podcast won’t be made available for free for 48 hours after the show.

Lol so…he thinks people are gonna pay to hear it sooner? No thanks. The news is already a week old, I can wait a couple extra days. If anything, that will make me stop listening totally.

From my personal perspective, I always thought the biggest gap in coverage during the LAW days was that we never got John and Wai doing proper reviews of PPVs since Sunday nights were reserved for Agnew and Mouth. I’m sure there was some nostalgia or a familiarity factor for the long-time listeners from the Toronto area, but the flagship LAW program was always my least favorite.

I have no issue with Agnew or Mouth (though it sounds like maybe I would if I knew the whole story?), just not my cup of tea. Best of luck to them.