Jeff Hardy: The idea of going through a program with The Young Bucks right now is great, but very intimidating

Originally published at Jeff Hardy: The idea of going through a program with The Young Bucks right now is great, but very intimidating

The Young Bucks and The Hardys have ran into each another twice over the past several weeks.

In the main event of the 5/11 AEW Dynamite, Jeff Hardy defeated Darby Allin to advance in the Owen Hart Foundation tournament. Hardy is now scheduled to take on Adam Cole in the next round and the conclusion of Dynamite saw The Undisputed Elite (Adam Cole, Bobby Fish, Kyle O’Reilly, Matt & Nick Jackson) staring down The Hardys, Darby Allin and Sting.

The Hardys and The Young Bucks have wrestled each other five times and the most recent occasion was at Ring of Honor Supercard of Honor in 2017, just one night before The Hardys returned to WWE. Jeff appeared on AEW Unrestricted and said the idea of entering a program with The Young Bucks is intimidating, but it should be great.

Yeah, but Matt The Young Bucks and FTR match, Matt asked me, ‘What did that match mean to you? What’d you think of it?’ And I said, ‘I don’t know. It’s just amazing’ and he said, ‘It’s intimidating, because we’re older’ and the idea of going through a program with The Young Bucks right now is very intimidating, but it’ll still be great.

Back in October of 2019, Hardy was arrested in North Carolina for driving under the influence. He told Aubrey Edwards and Tony Schiavone that he’s officially off probation and he’ll be able to drive again this October.

God, I don’t consider myself a ‘legend’. Whatever that’s brought me down, that’s my legendary status as far as, you know, when you get knocked down, get back up and keep your sh*t together. I just got off probation Wednesday, so I’m free now. But I can’t drive until like October. Sorry, too much.

As a part of an eight-man tag match in March, The Butcher and The Blade were set up on tables in the concourse area of the H-E-B Center in Texas. Jeff climbed a ladder and got himself onto a ledge so he could hit the Swanton Bomb onto Butcher and Blade through tables.

He spoke about how nervous he was but once he got to the top, he knew he would be okay.

The Owen Hart Foundation tournament will continue on as Kyle O’Reilly takes on Rey Fenix and Samoa Joe goes one-on-one with a ‘joker’ mystery opponent.

If the quotes in this article are used, please credit AEW Unrestricted with an H/T to POST Wrestling for the transcriptions. 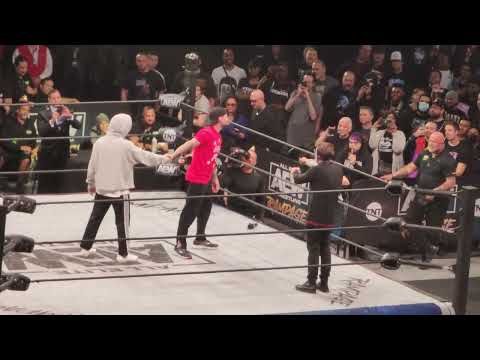