On Saturday night, AEW issued a statement announcing the passing of Jon Huber a.k.a. “Brodie Lee”, who had been off television since October.

Huber, 41, had been battling a lung issue as confirmed by his wife Amanda in a statement she posted on Saturday evening:

I never wanted to write out those words. My heart is broken. The world saw him as the amazing @brodielee (fka Luke Harper) but he was my best friend, my husband, and the greatest father you would ever meet. No words can express the love I feel or how broken I am right now. He passed surrounded by love ones after a hard fought battle with a non Covid related lung issue. The @mayoclinic is literally the best team of doctors and nurses in the world who surrounded me with constant love.

On top of that, I can’t express my love and admiration for the way @allelitewrestling has treated not only my husband but myself and my kids. @margaret.stalvey @meghalegalgirl10 @americannightmarecody @thebrandirhodes @nickjacksonyb @mattjackson13 @kennyomegamanx @tonyrkhan and the rest of the team at AEW have helped keep me standing and pick up all the broken pieces.

I’ve been surrounded by so much love and incredible people I can’t tag them all but they know who they are and I don’t think they will ever know how thankful I am for them.

Huber had just turned 41 years old earlier this month and had two children, Brodie and Nolan. His last appearance on AEW Dynamite was October 7th where he had a Dog Collar Match with Cody for the TNT Championship.

He was a seventeen-year veteran and a native of Rochester, New York beginning his career in 2003.

Wrestling as Brodie Lee, he would become a regular for CHIKARA and gained international notoriety when he began wrestling for Dragon Gate in 2010.

In March 2012, he signed a developmental contract with WWE and was assigned to Florida Championship Wrestling under his new moniker, Luke Harper.

He was quickly paired up with Bray Wyatt and began the creation of The Wyatt Family along with Erick Rowan. The unique vignettes led to buzz among those that followed NXT during this era. With Rowan, the pair were the second NXT tag champions defeating Adrian Neville & Oliver Grey in May 2013.

The Wyatt Family’s call-up to the main roster occurred in the summer of 2013.

Their first few months on the main roster culminated with a big showdown against The Shield at Elimination Chamber in February 2014. The Wyatt Family were victorious in the six-man tag right before The Shield broke up two months later.

There were attempts to disband the group and send them on their own with Harper winning the Intercontinental title in November 2014 but only held the title for one month before dropping it back to Dolph Ziggler.

His last substantive run was alongside Erick Rowan as the re-packaged Bludgeon Brothers in 2017. An injury to Rowan put a halt to their plans as a team in 2018 and in April 2019, Harper publicly requested his release, but it was not granted.

Harper was released by WWE at the end of 2019 with his final on-screen appearance occurring at the Crown Jewel event two months prior and worked live events until November.

He signed with AEW and debuted on the March 18th edition of Dynamite this year where he was revealed as the mysterious leader of the Dark Order. The addition of Lee was a turnaround point for the group, which had been panned by the end of 2019 by fans. The group had a better direction along with comedic additions that were explored on “Being the Elite”, and have now become the main act on the show with Lee having a prominent role prior to his illness.

Lee ascended quickly where he challenged Jon Moxley for the AEW Championship at “Double or Nothing” this past May, and won the TNT Championship from Cody Rhodes in dominant fashion in August.

It was shared to us by a close friend of Huber’s that he loved hockey almost as much as he loved wrestling. His favorite team was the Toronto Maple Leafs.

This is a tragic story of a father, who leaves behind two children and a wife and our deepest sympathies are extended to the Huber family during this incredible loss. The reaction online from his peers and colleagues gives you a small sample of how respected this man was.

I was fortunate enough to work with Brodie many times over the years. He was a genuine, hard working, honest, good person.

He remembered where he came from and those who were part of that journey.

I’m in shock, and really saddened.

I’m heartbroken. He was a good family man and father.

Just terrible to hear this earlier. I first saw him in Chikara in 2007, when he came in as “The Right Stuff” Brodie Lee, but by the end of the summer remade himself in the Big Rig persona (to which Lee has credited the late Mitch Ryder). I watched nearly everything he did there, including a hoss battle feud with Cesaro, and it eventually led him to several other promotions and worldwide TV. Definitely one of the good ones, not just the Exalted One. 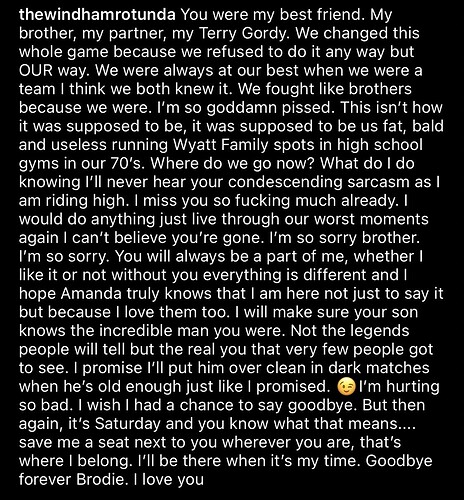 I can’t even imagine how devastated Bray Wyatt must be right now. The Terry Gordy assessment is as close as it can get between Bray and Brodie. They were literally like brothers.

Been 2 hours since I’ve learned about the news and I just still can’t process it. Thinking about his wife & his 2 sons right now.

A month ago I asked where was Brodie Lee in a RASD Zoom chat. Just finding out the news on twitter and I am in utter shock and disbelief.

He MADE the Dark Order and gave the group a chance to break out and become a more comedic, but yet each have an individual presence in the group, which they didn’t have a year prior. He had a presence what screamed star attraction because he carried himself as such whenever and wherever he preformed.

Their comedic side I feel is more a collective effort, but he was a fantastic foil for Reynolds & Silver, and his “little biiiiitch” line slayed me. I’ve gone back and watched that BTE segment with the Dark Order and Trent’s mom Sue, where she attempts to throw papers at Silver, a number of times.

Heartbreaking news to wake up too this morning.

I am at a loss for words.

This is fucking terrible. Just a truly shitty way to end a shitty year. I woke up this morning and have just been watching twitch, not even looking at any wrestling stuff and then I saw this on yahoo and was just floored.

Watching AEW, I was expecting maybe he’d be back soon and would end up feuding with Hangman Page or something. This fucking sucks. I’m just glad he had a good last run, that he deserved.

Jesus this is terrible news to wake up to,just read what Bray wrote,my god it’s so sad.
RIP Brodie

This one is really hitting me hard. I dont usually cry when something like this happens, but this one got me.

When I saw #RIPBrodieLee trending I genuinely thought it must be an old celebrity that I didn’t know with the same name. Was shocked when finding out that it was actually the wrestler Brodie Lee. Still don’t know if this lung condition was something he always had or something that had developed recently. Feel terrible for his family and everyone else who were close to him. RIP.

So glad I made time to go back and watch this 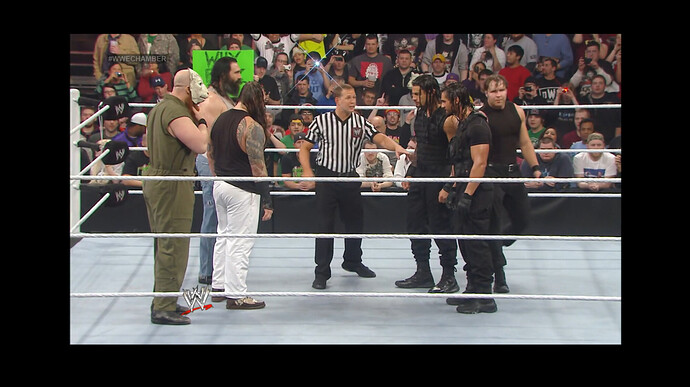 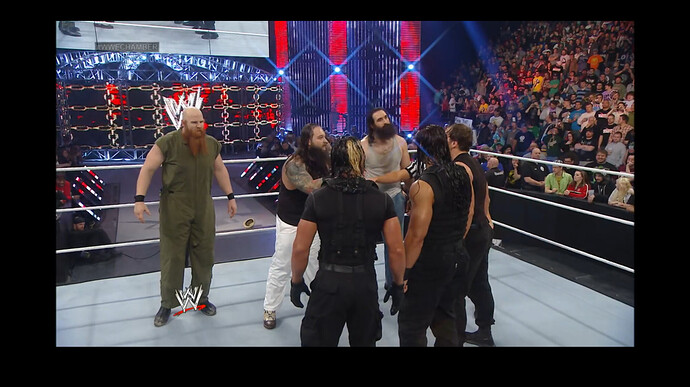 I did the same thing (hell of a match), along with a rematch these two teams had on Main Event two months later, as well as the singles match Harper had with Dominik Dijakovic last year. I plan to go back to that 2014 Raw the night after WM30, which looking back sounds pretty fantastic, but includes the crowd singing “He’s Got the Whole World In His Hands” for the Wyatt Family. 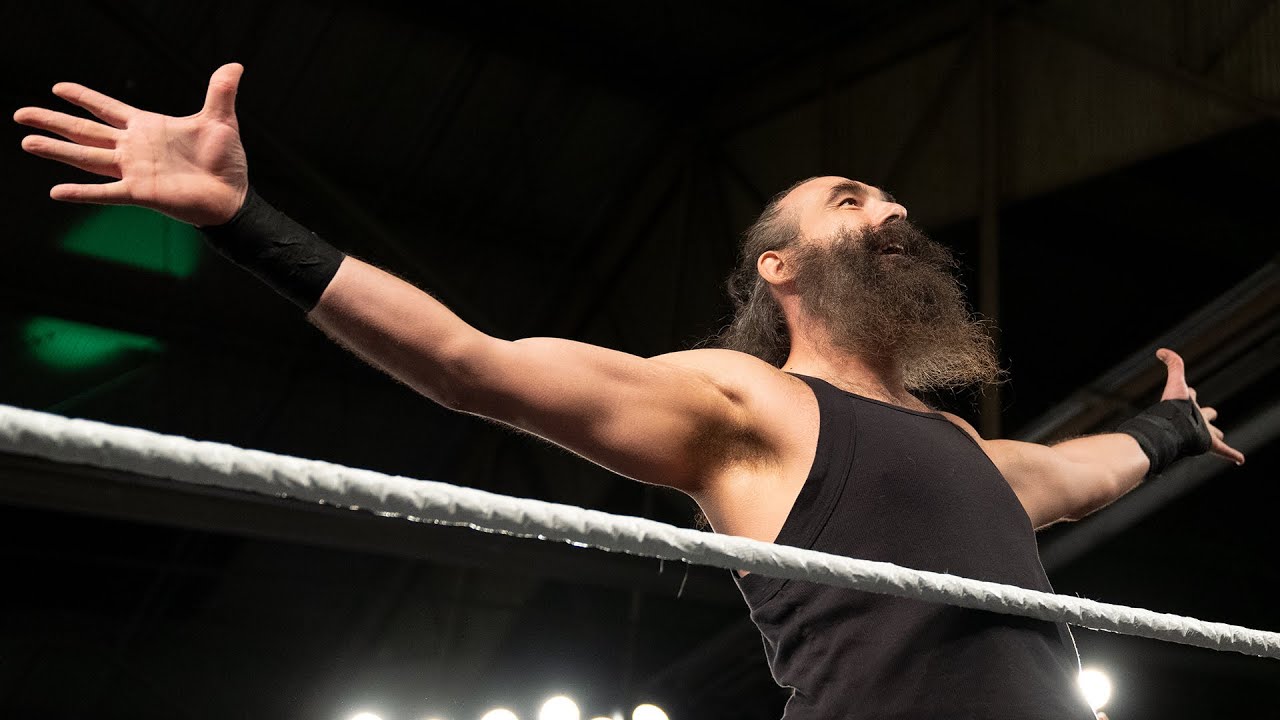 I was shocked to hear the news of his passing. I remember first seeing him wrestle here in Ontario for UWA. He had a good match with Colin Olsen. I was immediately a fan of his and I always knew what he was capable of. It was nice to see him go to AEW. He was proving to everyone that he was held back in WWE.