I’d personally prefer him to stay in NJPW. Second is WWE and last is AEW. I know he would have creative freedom in AEW but it’s untested waters and who knows how long the company will last.

so it seems like he’s coming back to north america full time, so let’S the bidding war begin.

Personally, i would rather that he goes with his friends in AEW and be like Sting. By that i mean be a guy that WWE always wanted and never was able to get while in his prime. But at the same time, i wouldn’t blame him if the WWE made the bigger offer and he goes for the money instead of creative freedom. A lot of other guys did the same thing in the last few years, Nakamura is one example of someone who really could care less how he’s booked, he sign with them for the money and he’s just happy getting a paycheck. So if that’s what Omega wants to do, i say go do it. I would do the same thing in his position.

Kenny Omega not caring about how he is booked, treated, protected, and built as a character? Have you followed this guy at all over the past 5 years?

Here is a guy who performed his former partner’s moves 2 years before they would reunite. A guy who wore symbols on his outfit to hint at the fact the relationship wasn’t fully over.

I would be appalled and truly disappointed and let down as a fan if Kenny Omega became a WWE corporate schill who just took the money and let his legacy go to waste.

Honestly, Nakamura ruined his legacy as an international performer. Sure, he is a legend in Japan but anyone who ever heard of this guy being awesome before coming to WWE doesn’t think that is the case anymore. And if that would to be Kenny’s future I’d be let down as a supporter of his.

i really don’t know anything about the guy outside of what i’Ve been hearing about him from john and wai during their time on the Law and even today with their coverage of the NJPW product. I don’T watch NJPW or care to follow it as the last thing i need is watching even more wrestling. So let face it, i wouldn’t be surprise if he decide to give up creative control if they give him what he want and that’s his dream match with AJ Styles at mania.

Has for nakamura, i was the same way with him as i would be with Omega, i didn’t know anything about him when he came in and i really wasn’T impress with him when he debut in NXT. I feel the difference with Omega compared to Nakamura is that he might just take the offer just so he can have his match with Styles and then not resign after his contract is up, Nakamura look to be happy just getting paid and if they offer him another contract, he would probably resign since money talk and he look like a guy that just so lay back that if he get pay to wrestle a softer style so be it.

Joining to face AJ and leaving after (doing a short term deal would be cool).

yeah, i feel you could really do a trial run with him and see if casual fans take to him and a program with AJ Styles especially during mania season would help make him look like a big star to a lot of casual fans. If they don’t take to him then don’t offer him another contract and let him go wherever he wants and if it works then go out of your way to keep him around after mania.

It’s strange that I keep seeing people compare Omega more with Nakamura than with Styles.

“If he signs with WWE, he’ll just be ruined like Nakamura.”

For the past few years, especially since Styles left NJPW, Omega has proven to be a younger, bigger version of AJ. He’s arguably even more marketable. If Styles could overcome Vince’s initial criticisms, who’s to say Omega wouldn’t do the same? At worst he has a mediocre run similar to Nakamura where he still leaves with a lot more world wide recognition. At best, he becomes a face of the company ala Bryan, Styles, or Rollins and then moves to AEW anyway.

WWE is what it is. Kenny knows that. Could he move the needle? I think he already has. Personally, I want to see what he could do in WWE, but if not, I hope he can help AEW become a viable alternative we haven’t seen since WCW folded.

Styles has North American TV exposure (remember a million ppl were watching Impact on Spike - that’s like a third of the WWE audience).

Also Kenny is largely considered a Japanese wrestler by American WWE fans who only know him as the guy who wrestles in Japan.

Omega is a bigger name now than Styles was before coming to WWE. And considering he’s become the star he has without a major outlet in North America speaks volumes.

The main difference between the two is that Styles is a family man who lives in Atlanta. WWE was always the goal for him. It was inevitable he wound up there. Omega’s personal life has been kept private, but from the looks of it he only has to worry about himself. He doesn’t necessarily need WWE other than working with certain guys before they retire and to do that on the biggest stage possible.

AEW will be there for him at anytime.

Omega is a bigger name for the hardcore wrestling fans only, go ask anybody that don’T follow ROH, NJPW or the indy scene in general and the majority don’t know who Omega is. Styles coming in was well known to the casual fans as he had national exposure with TNA when they where on Spike or when he started at the tell end of WCW. So everybody was familiar with him, so it was easier for him to get over with the WWE crowd because he was a familiar face.

The only thing Omega did of note that the mainstream audience might be aware of was when he was in developmental in Deep south i think. So he a big star but not as big of a star as AJ Styles was when he join WWE.

Kenny has way more relevance than I thought. (added JDF in there for you for comparison) 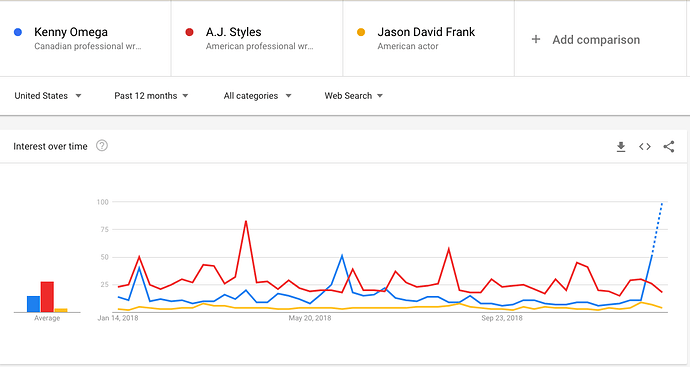 Yeah but i’m saying for casual fans that don’t live in the wrestling bubble we live in, Styles is a way bigger star then Omega is. Styles got some exposure in the north american market 10 years before going to japan, Omega didn’t. Go ask somebody that only watch WWE and doesn’t live on the internet discussing about wrestling who Kenny Omega is and 9 times out of 10, they won’t know who the guy is or will have heard of him but never say him wrestled. So he not as relevant to the mainstream audience as he is to the hardcore audience.

Anyone who follows wrestling begins the big shows likely knows a Kenny Omega exists. That said, spot on about TNA and Styles. Spot off about Deep South being exposure

If anyone thinks AJ Styles is a bigger star than Omega is also in a wrestling bubble…fact is…both are nobodies outside of pro wrestling.

Being big in rasslin is like saying you’re a major star because you got 100k hits on youtube…it’s not even close to being anything.

If anyone thinks AJ Styles is a bigger star than Omega is also in a wrestling bubble…fact is…both are nobodies outside of pro wrestling.

Pay attention son, we are talking about wrestling.

Yeah but i’m saying for casual fans that don’t live in the wrestling bubble we live in, Styles is a way bigger star then Omega is. Styles got some exposure in the north american market 10 years before going to japan, Omega didn’t. Go ask somebody that only watch WWE and doesn’t live on the internet discussing about wrestling who Kenny Omega is and 9 times out of 10, they won’t know who the guy is or will have heard of him but never say him wrestled. So he not as relevant to the mainstream audience as he is to the hardcore audience.

The people who were watching Impact are the same demographic that know of wrestling outside of WWE. The kids and the families don’t know who Omega is, but the ratings information at the time said they weren’t watching Impact to know who Styles was either.

When analyzing the stock recently I used some of these assumptions for the US market:
4 millions fans.
1.2 core fans.
600k fans hardcore.
Which means I’d consider 2.8 casual fans who may watch regularly but not follow anywhere besides tv and wwe