Anyone who watched NXT can explain what’s going on here ? 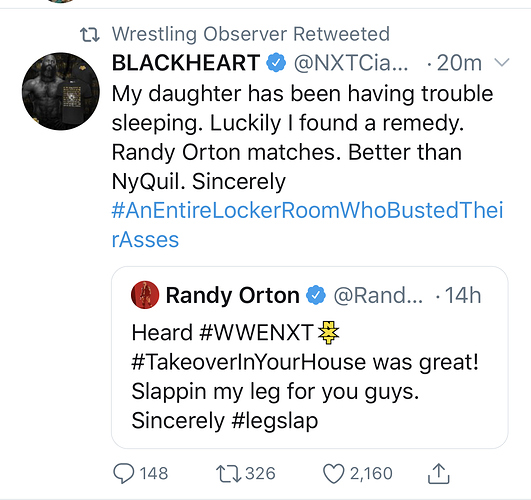 I think Randy is refering to wrestlers slapping their legs in NXT to make that whipping sound. It’s an old trick that they use in NXT.

Ya, Johnny Gargano does this all the time, if you watch his match with Keith Lee you can hear it every time he kicks him in the head. Adam Cole, Aleister Black and Buddy Murphy also use this quite often.

Why not, it works. It gives the illusion that the kicks were deadly which is the art of wrestling, Bret Hart said it best, you want it to look like you are hurting your opponent, but the art is not actually hurting them. There is no art to just kicking them for real.

But, let’s not lose sight of the fact that Randy Orton is slow and boring

LOL, Ciampa kinda looks like a dork here. The leg slaps are annoying, I’m with Orton

Come on guys… Everybody knows, wrestlers slap their thigh when delivering kicks, to cause muscle spasm in their legs, and in turn, make the kick stronger and more dangerous to their opponent.

Isn’t the leg slap used just about everywhere? Personally I do think it’s overdone when an alleged right hook to the gut makes a huge SLAP like someone just hit a dinger with a wooden bat. That’s not even what getting punched in the gut sounds like, and if you really got hit that hard, you wouldn’t be kicking out at 2. They should save it for knockout blows, not every punch or kick.

Orton is a tool, but I’m a little disappointed in Ciampa. He has one of the few great “work” Twitter accounts in WWE, but today he doesn’t care at all about getting choked out in six minutes because Randy Orton was mean to his friends.

Or Orton is working. Though wrestlers who are allegedly “in character” making comments about how wrestling is fake is pretty dumb.

Orton could’ve used a leg slap when he was using that comical looking punt kick.

Orton’s first tweet is kind of in a joking manner, but his response to Ciampa felt more serious and meaner.

Orton meanwhile is potentially in between two very plodding matches of his own.

I dont know…at times that kick was brutal, I can’t say I find sniff shots to the temple funny. Pretty sure that’s why WWE banned it. If memory serves me correctly, didnt he give Vince a legit concussion with it?