The link above lists the charities the teams are fighting for in the upcoming mixed match challenge. Connor’s Cure and Make a Wish strike me as the most prominent that WWE promote. Its weird if they give the grand prize to Connor’s Cure since didn’t WWE start that? That’s Strowman’s team (big surprise). I thought Asuka/Miz may win but an animal charity? I think not.

While I support giving thousands to charity I think it’s strange praising one over the rest in a “fake” tourney.

Btw, anyone know if we can get this show in Canada. Some of the pairings look interesting.

Based on that list of charities, for sure Braun and Alexa are winning.

I just saw this in Facebook, and I am in Canada. 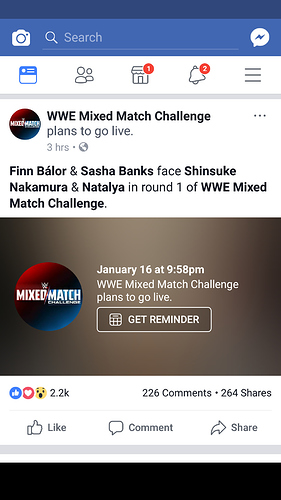 I’m guessing all charities already have a measure of donations paid from WWE or the superstars themselves…wonder if the show plugs all charities with their contact info so the people watching can be guilty into donating as well.

Anyway, it definitely seems weird and tacky to have a predetermined wrestling tournament dictate which charity gets donated to. Maybe WWE and maybe facebook will give all the charities more than $10,000 at the end.

WWE is great at taking something great like donating money and turning it into something slimey. No matter how genuine the wrestlers themselves are

So thats why all commercials have such uplifting music.

Asuka/Miz should’ve came back with: “the Susan B. Comen Foundation”. That would’ve thrown some suspense into the whole which team will win issue.

Imagine WWE putting Punk in the tag for the Susan G. Komen Foundation. That would’ve been something else…

I hope a babyface team wins and they share the prize money with the other teams. I don’t know if any of those wrestlers has a legit connection to the charity they’re fighting for, but it’s just stupid to let bookers decide which charity gets the money, especially if it’s one that’s heavily advertised by WWE.

In the end, I don’t care which charity gets the money, as long as it isn’t Susan G. Komen…

I feel Sami did and some others did too following them on twitter. I also feel there are those who had no choice and Connors Cure is the one they want to spoil with money. Though the optics look bad. Besides the controversy over komen each charity seems very worthy and I hope gets attention.

And here’s Dana Warrior to present the trophy and the giant check. The segment ends with the Warrior’s music playing and everyone shaking the ring ropes.