The show began with a recap of Season 3, which concluded last October and culminated with Pentagon Dark winning the Lucha Underground championship and Dario Cueto being shot inside his office.

There was a funeral scene with Dario Cueto inside the casket. This featured the first appearance by “Antonio Cueto”, the storyline father of Dario (played by the same actor as Dario, Luis Fernandez-Gil), who met with Agent Winter and revealed that Dario’s father ordered the hit on his son. Antonio took Dario’s key before shutting the casket.

Melissa Santos began the show inside the ring with a moment of silence and ten-bell salute for Dario Cueto. It was interrupted by Antonio Cueto, who announces himself as the new owner and promoter of Lucha Underground as he knocks over the photo of his son. He announces Aztec Warfare for tonight with Pentagon Dark defending his championship.

After the break, Killshot and The Mack were both in the ring to start the match. They are currently the Trios champions along with Dante Fox, who was not there, and Antonio announced that the third entrant in the match would be their new partner and be replacing Fox in the team.

Son of Havoc is introduced at the start and is now one of the Trios champions with Killshot and The Mack.

Ryan revealed handcuffs inside of his trunks as he entered the ring and cuffed himself to the rope.

Matt Striker said that if Magnum TA and Scott Hall had a child it would be Ryan.

Killshot caught The Mack with a roll up after Mack delivered a splash in the corner for the first elimination of the match.

Pentagon took Ryan and threw him over the top rope for the second elimination.

Pentagon hit Killshot with a package piledriver and Son of Havoc pinned him with a shooting star press.

Dreamer received a big reaction for the surprise entrance. Dreamer brought several weapons into the ring.

Mr. Pectacular was eliminated as Pentagon and Dreamer had a stare down.

Son of Havoc eliminated Mariposa after hitting a cutter.

Pentagon placed thumbtacks onto the bleacher steps as he brawled with Dreamer. Dreamer took a bump onto the tacks.

Pentagon hit a double foot stomp inside the ring and pinned Dreamer.

Massaro had a pizza delivered to him on the way to the ring and refused to pay for it. He offered a slice to Pentagon, who shoved it into his mouth and hit a package piledriver onto the pizza box and Massaro was eliminated.

This is Hernandez’s first appearance since Season 1.

Pentagon snapped the arm of Hernandez and pinned him immediately.

They continually tease Pentagon and Son of Havoc fighting before someone would enter and get in the way. After the elimination of Hernandez, they finally fought, and Pentagon eliminated Son of Havoc with a pinfall.

Matt Striker explained this spot was scheduled for Angelico but has been replaced by Ricky, who came out with a doll.

The Mundos double-teamed Pentagon. Ricky tried to roll up Johnny and they argued. Johnny came back and hit him with a spinning neck-breaker and eliminated Ricky.

There was an incredible sequence of Fenix with Mundo as he springboarded and sent Mundo to the floor followed by a twisting dive to the floor.

Crane dropped Fenix onto a chair with a suplex.

Everyone worked together against Muertes, culminating with Fenix hitting a huge double foot stomp to the back of Muertes and was pinned by Fenix. Catrina left ringside without Muertes.

Guerrero lost a “Loser Leaves Lucha Underground Match” to Rey Mysterio in Season 2, so this was his first appearance on-screen since losing that match.

Mundo hit End of the World to eliminate Daga. Kobra Moon yelled at Daga over his elimination.

Kobra Moon returned and brought out Vibora of The Reptile Tribe to attack Johnny Mundo with a chokeslam and tombstone.

Mundo is left for dead and Marty pins him after the attack by Vibora.

Guerrero attacked Azteca Jr. with a chair shot from the floor. Cuerno stopped Chavo from hitting a frog splash and hit his own splash to eliminate Azteca Jr.

It is down to Pentagon Dark, Chavo Guerrero, King Cuerno, and Marty the Moth.

Pentagon hit a running kick to eliminate Guerrero and it’s down to Pentagon and Marty the Moth.

Marty hit a TKO and Pentagon kicked out. He followed with a curb stomp for another two-count. Marty hit a double underhook Impaler DDT for a near fall.

Pentagon came off the turnbuckle with a Destroyer and follow up Pentagon Driver for the win.

After the match, Pentagon took Marty and snapped his right arm.

Antonio Cueto congratulated Pentagon Dark, he said Dario would have him defend his title against someone else right now, but he is a much better promoter and made a title match for next week against Matanza Cueto.

This was an easy show to watch and designed as a “catch up” style of an episode because of the long break since Season 3 ended last October.

The Aztec Warfare Match has become the signature match for Lucha Underground, but this one fell short of prior versions of the match. There were some surprises and strong action sequences, but the entrances were so quick that it was hard to build any momentum during the body of the match with so many quick eliminations and keeping a finite number of participants in the match throughout. Pentagon Dark was booked very strong in the match and positioned as the star of the show.

The decision to kill off Dario and introduce his “father” may open up some new stories, but the immediate comparison I had was the movie “Beerfest”, where Landfill dies and is replaced in the movie by the same actor playing his twin brother, Gil.

The comparisons to past seasons will be made throughout the season, the elaborate backstage scenes were greatly reduced in the season premiere and limited to the opening funeral scene with Antonio’s introduction with Agent Walker.

I swear some of the wrestlers looked like different people. It might have been the long lay off but I would swear all the women in masks and King Cuerno all looked to be different body types then when seen last.

They probably are different people under the masks. If I remember correctly, people who wanted out of their contracts were allowed to leave. It is easier to have different Wrestlers continue Masked Gimmicks.

However Dante Fox was missing, as he doesn’t wear a mask, they had to write him off using a different method.

They finally did show up: 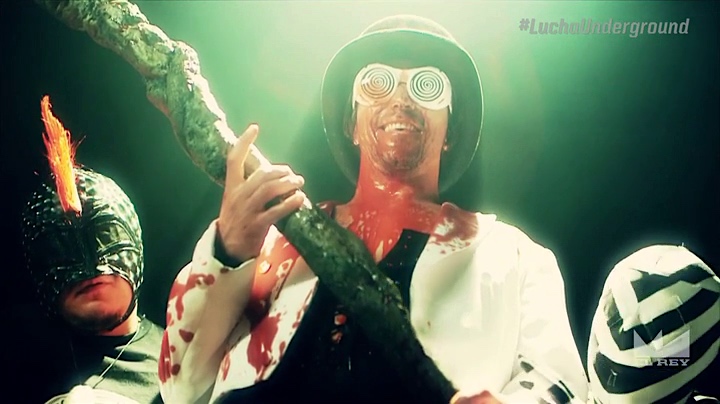 its ok he only killed a mini. Anyone know who the White Rabbit is? He looked familiar