WWE RAW talent Matt Riddle has undergone a name change. His first name has been dropped from his on-screen character and he will now be known as “Riddle”. The name change is reflected on WWE’s website. PWInsider added that the decision to change Matt Riddle’s name was made today.

Riddle was moved to the Monday Night RAW roster as a part of the 2020 WWE Draft. He competed this past Monday against Sheamus in a Team RAW Survivor Series qualifying match that he lost.

Riddle made headlines earlier this month and in September when he elected to file a lawsuit against Samantha Tavel, who dons the in-ring name “Candy Cartwright”, for her allegations against Riddle during the #SpeakingOut movement.

Earlier this month, Tavel launched a civil lawsuit against Riddle, an unnamed co-founder of EVOLVE and WWE. In documents obtained by Fightful, she is seeking $10 million from each of the defendants.

I wish this was some type of joke. Another character Vince just doesn’t get.

I still can’t believe they changed Keith Lee’s theme song when he went to raw. I have no faith in wwe.

It’s a riddle… Ya, that was pretty bad.

This is so fucking stupid. Next step is the make him a cheap knock off of The Riddler.

I dont normally care when WWE do this, to be honest I think the online fans have a tendency of overeating to name changes in general. For example, I have no issue with “Cesaro” rather than “Antonio Cesaro”.

This one is different, Matt Riddle is a former UFC fighter who presents himself (at least esthetically) as an MMA fighter. Going by his full name IMO feeds into that gimmick and his past. He’s just not the type of character who should go by one name.

I wonder if it has nothing to do with the charges against him? Maybe the idea is that if new fans google “Riddle” certain articles wont come up. Probably not, but possible.

Are people still saying this in 2020? And if so, what ideas from this millennium do they point to?

In his day I dont think there was a promoter out there that had Vince vision when it came to big picture stuff. And even today, I think when Vince locks his teeth into something that is good, he still has something left (see Roman vs Uso, Edge vs Orton etc.) but since the end of the attitude era, I dont think many people are still calling him this. The only I can think of is Jericho, I know he said it in an interview with I believe Bully Ray.

If you read JRs book, you get the impression that Vince has pretty much lost his mind since the InVasion mess.

I don’t think anybody can be a booker for 40 years without running out of steam. Vince was some measure of genius/innovator/whatever for a long time. But I think even for those who enjoy watching the current WWE product, it’s a huge stretch to say that he IS a genius. That’s like saying 58-year-old Jerry Rice IS the best wide receiver in football. It’s not meant to diminish anything that Vince was back in the day, but it’s also clearly not true today.

Anyway, conversation successfully derailed. Back to the point: Riddle is a very stupid name. We’ll get over it.

Next step is the make him a cheap knock off of The Riddler. 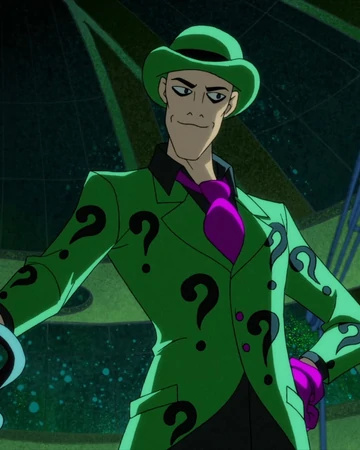 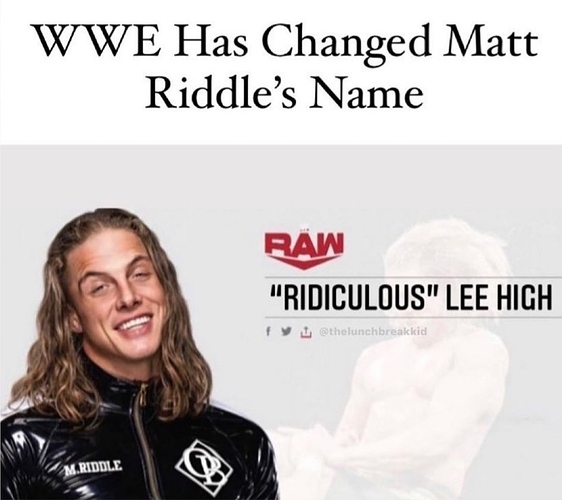 You forgot The and The.

I hear what you are saying lol, but I’d probably leave Triple H off that list.

Well, he did go from Hunter Hearst Helmsley to Triple H. Which is even worse, really