My current thoughts on AEW. 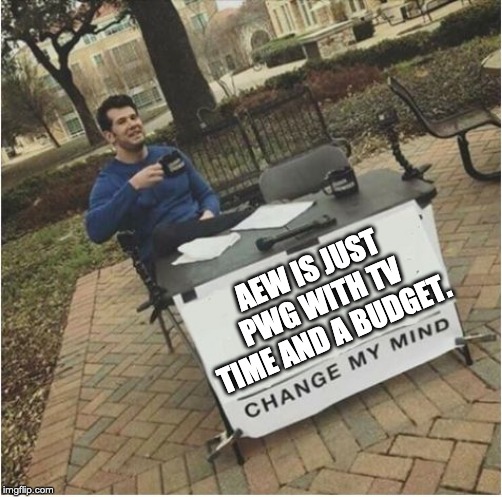 With enough legit star power that adds an element of legitimacy and high quality production. Not wrong though.

With enough legit star power that adds an element of legitimacy

It’s like a parallel universe version of 2009-2010 Impact where they decided to focus on the X-Division & tag teams instead of dealing w/Hogan & Bischoff.

You’ve used the word “just” as if PWG with TV time and a budget isn’t a spectacularly great thing.

And women. That’s different at least (since Candice left anyway).

This thread doesn’t make much sense and the day this ‘change my mind’ meme dies, the better. Change my mind.

I don’t know what PWG is or have ever seen a. Show. From podcasts I believe it’s a smaller Indy promotion with killer matches.

The first time I saw ECW I knew they would never eclipse WCW let alone WWE because of how ghetto it looked.

AEW isn’t ghetto. It doesn’t look like bingo hall wrestling and getting over to 300 drunken fans

Having just watched the main event of this week’s NXT I would suggest you could also level the same accusations that way too.