Today’s New Japan Cup semi-finals come to us from Korakuen Hall again. Today’s show is available for FREE on New Japan World to everyone, no subscription is required. Before we get into today’s matches, I thought I would look back through the tournament and give my recommendations for some matches that are worth going back and checking out in case you missed them:

This was a very good 8-man tag match that continued to set up the IWGP Tag Team Championship match between TAICHI and Sabre Jr vs Tanahashi and Ibushi for Dominion next weekend.

Desperado pinned Kidd for the win.

Another very good tag match. SHO got the win for CHAOS after hitting Shock Arrow on BUSHI. SHO continued to push Takagi for a NEVER Openweight Championship match and their interactions during the match and in particular, after the match, were fantastic. Takagi held out both of his belts and asked SHO which belt he wanted to challenge for – the NEVER 6-Man or the NEVER Openweight. SHO grabbed the NEVER Openweight and speared Takagi.

After weeks of seeing a video promoting THE WAY OF THE GRANDMASTER- we finally find out who the Grandmaster is. MASTER WATO, returning Young Lion Hirai Kawato who has spent his excursion in CMLL in Mexico, is introduced in the final video. I can not wait until we hear WH Park’s thoughts on Master Wato’s gear and name. If your name is Wato and you have blue hair and blue gear, you might be a fan of The Phantom Menace.

Master Wato comes to the ring in an empty Korakuen Hall and DOUKI immediately comes out and attacks him with a metal bar. I would assume we see Master Wato versus DOUKI at Dominion, no word on if the winner receives any pod-racing engines.

This is the third singles match between these members of LIJ. In 2017 G1, SANADA defeated EVIL and during last year’s G1, EVIL defeated SANADA.

SANADA extends his hand and as EVIL shakes it, he immediately tries for Everything is Evil. SANADA avoids it and tries for Skull End but he can’t get it. Both guys end up outside and EVIL runs SANADA into the barricades and grabs a chair. With the chair around SANADA’s neck, EVIL runs him into the ring post and the chair explodes. Back in the ring, EVIL grinds his elbow into SANADA’s face. Low dropkick by SANADA to EVIL’s left knee. Forearms by SANADA, another low dropkick to the same knee, and a hurricanrana send EVIL out of the ring for a breather. SANADA hits a plancha to EVIL on the floor and he rolls EVIL back into the ring.

A scary spot where SANADA looks like he is going for a Sliced Bread number 2 and as they come down he lands right on the top of his head. SANADA eventually gets Skull End applied and when it looks like EVIL is out, he lets go of the hold to go for a moonsault. EVIL gets his knees up to block it and EVIL is trying to shake off that left knee that SANADA had previously targeted with dropkicks.

SANADA charges at EVIL who is in the corner. EVIL grabs the referee and SANADA runs into the ref. EVIL grabs SANADA and runs him into the referee again. The ref is killed and rolls out of the ring when EVIL hits SANADA with a low blow. EVIL brings two chairs into the ring and wraps one around SANDA’s neck. EVIL hits a home run swing with the other chair knocking the first off of SANADA. EVIL stomps SANADA between the legs and hits Everything is Evil for the win.

Very good match between these tag team partners and LIJ members. SANADA wrestled the match as a babyface and kept within the rules, respecting his tag team partner. EVIL, on the other hand, took every advantage to get the win. EVIL looked down in contempt after the match and walked away leaving SANADA lying in the middle of the ring. The possible dissension in Los Ingobernables de Japon continues and the New Japan Cup finals will have at least one member of LIJ looking for the double title shot against Naito. Add this one to the list of recommended matches.

Hiromu stares at his opponent before the match starts and Okada walks past him and ignores him. Red Shoes is your referee. The IWGP Junior Heavyweight Champion’s right bicep has some nasty bruises. Hiromu shouts “OKADA!” as the match starts. As Okada gets Hiromu into the ropes, he does his patented disrespectful clean break spot. Hiromu won’t have any of that and reverses Okada into the rope and copies the clean break but follows it up with a slap to Okada’s chest. Big clothesline by Hiromu and a hurricanrana. Hiromu gets Okada up for a Timebomb but Okada slips out. and applies a Cobra Clutch. Hiromu gets a rope break.

Outside the ring, Okada hits a neck breaker on Hiromu. Both guys get back in the ring and Okada takes the advantage. Hiromu slaps Okada who then hits Hiromu with another neck breaker. A lariat by Hiromu and Okada hits a low dropkick. Chop by Hiromu, shotgun dropkick, and Okada goes outside. Hiromu hits a running dropkick from the apron to Okada who is on the floor – Okada is launched through the gate of the barricade.

Back in the ring, Hiromu tries for a suplex but can not get Okada up. Hiromu hits a superkick and a Falcon Arrow. Okada hits a huge flapjack and a DDT for a two count. European uppercuts by Okada lead to a German suplex by Hiromu and both guys are down. Red Shoes encourages them to get up. Both guys lay in strikes from their knees. Hiromu tells Okada to bring it and they stand up and hit each other with more forearms. Okada hits some European uppercuts and a running dropkick that drives Hiromu into the corner. Hiromu is placed on the ropes and Okada delivers a dropkick that knocks Hiromu off the top rope and down to the floor.

Outside the ring, Hiromu is whipped into the barricade and Okada follows up with a boot to the face that drives Hiromu backward over the barricade. With Hiromu’s feet on top of the barricade, Okada hits a draping DDT to the floor. Okada throws Hiromu back into the ring and goes up to the top rope and hits a HUGE missile dropkick that looked awesome. Hiromu kicks out at two. Okada dropkicks the back of Hiromu’s neck. Hiromu avoids another dropkick and hits his own shotgun dropkick. Okada is now placed on the top rope and Hiromu hits another shotgun dropkick which causes Okada to fall to the floor. As Okada tries to get back in the ring, Hiromu hits a sunset bomb and Okada is slammed to the floor again.

WOW! This was incredible. The Rainmaker makes its triumphant return to Okada’s arsenal of moves. Okada attacking the neck of Hiromu throughout the match is significant both because of HIromu’s recent return from a broken neck and how it weakens his neck in anticipation for the Rainmaker or the Cobra Clutch. Hiromu’s ability to convey his Timebomb character throughout a match is fantastic. Hiromu Takahashi looked like an absolute star with the Ace of the company. Unfortunately, we won’t see Hiromu versus Naito at Dominion, which is a match they have been teasing since before the canceled NJPW Anniversary Show and throughout the suspension of live NJPW events and through this tournament.

Go out of your way to check this one out!

Super strong show. All four matches were very good to excellent. Both New Japan Cup matches were great. This is the kind of free show that should entice viewers to become new subscribers to NJPW World.

Next weekend we have the New Japan Cup Finals with EVIL vs OKADA followed by Dominion the next day as the winner challenges Naito for both the IWGP Heavyweight and IWGP Intercontinental Championships, and there will be an audience!

Let me know what you thought of today’s New Japan Cup show in the comments below or on twitter @ScarboroughDad and tell me what your favorite match of the tournament is so far. Thanks for reading.

I know things are done differently in New Japan but:

Okada in a prominent role again, Naito VS Hiromu is a much more enticing match

Hell of a debut 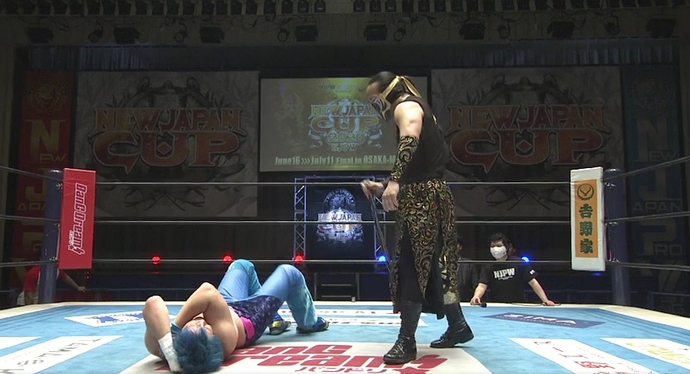