I see a dark horse final between Juice Robinson and Zack Sabre Jr, with Juice winning the whole thing.

I’ve got Ishii/Sabre with Ishii taking it.

Am I crazy to think Kota Ibushi is winning as he’s the hottest babyface (w/ Kenny) right now?

I think it’ll be a Ishii v Ibushi final, with some notable upsets being Taichi over Tanahashi and ZSJ over Naito to continue what seems like this LIJ v Suzuki-Gun mini feud

Lol that’s exactly why I don’t think he’s winning. Him and Kenny have other business to deal with

ORRRRRRRRRR Ibushi is beating TWO LIJ members, creating a feud between LIJ and Golden Lovers (while simultaneously furthering the Lovers story as now Ibushi beat Naito, which Kenny did not in the G1 final last year) and Ibushi can elect to use the win as a chance to go for Tag Titles with Kenny since he would have beat Sanada as well. Also, if Evil is out for extended time which I read, pair up Naito and Sanada as temp tag champs, or just strip Sanada and let him team with Naito to face Lovers for the belts. Who says no?! 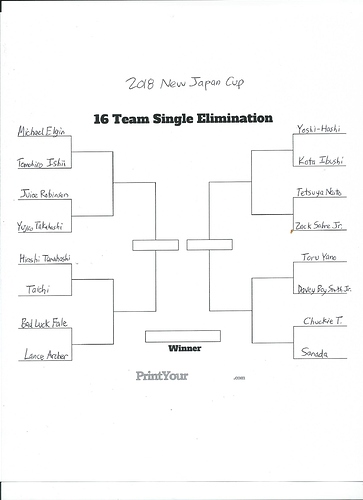 Argh, wish i saw this before unwittingly printing 18 pages of wiki out, circling and messily scribbling names, and sending a photo to John… probably late, too. Nice job, tho!

Interesting how varied the predictions for this can be! i’m going out on a limb and saying… Juice VS SANDA in finals, JUICE wins and takes a big step up to challenge Okada. (Battle of the new leg wear!)

Seems a weird choice, but i’m factoring out some other contenders…

Ibushi is geared up for the tag team match with Bucks; I don’t think he’ll move up to a big singles match before Omega.

Tanahashi will probably be Okada’s opponent if/when he challenges Tanahashi’s length as champion.

ZSJ would be interesting but not around enough yet or endeared to crowd as much as Juice.

Ishii… not out of the realm of possibility, but doesn’t seem like it’d be as hot. JUICE helps to tell that great underdog story.

Yeah, I should have made that sooner (just saw John put 10 pm EST Thurs for the deadline). I seriously could not figure out how this is going to go.

Well, my bracket just went to shit on day 1.