Below is the final card and what a card it is wow!! 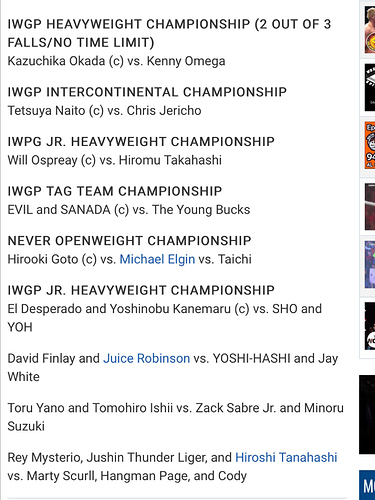 The Bucks selling is SO underrated. Nick selling his foot after every move he does is good work

Bucks win! Lackluster finish after a great match with Nick selling his foot like crazy.
Thought Sanada and Evil were taken out of their style a bit but they did the job well.

And Calis will be doing something with a headset on All In - looks like that’s being streamed which means they have TNA’s blessing on top of ROH and NJPW - traditional PPV?

Liger - Tanahashi out before Rey. That seems like a lot of respect being shown by all time NJPW guys.

Njpw world is just freeze go freeze go. I’ve ending up projecting through my laptop, which is fine, but seriously how hard is this?

Sorry to hear this.
I stream it on an old iPad connected to my TV and have never had any issues.

Yes there’s always a way, it’s the app on my firestick that gives me trouble.

Wow what an incredible high level high risk match Some of the matches in the junior heavyweight division recently has been outstanding OUTSTANDING!

Next Chris Jericho vs FuckFace

Jericho just gets better with age. His creativity and ability to change things up at this stage of his career is only adding greatly to his legacy. I can’t wait… Well, never mind. They’re brawling.

“COME ON NAITO YOU PIECE OF SHIT”

Okay, can I just say the fact either Will or Hiromi were able to walk away the Junior Heavyweight match amazes me.

Hiromi dropped on his head, then during the replay their was a cracking sound as he landed…sickening.

Sorry to hear that, I had no problems had the first 4 matches on my phone while finishing work, then since match 5 on my laptop at home.

But will have to go back and watch the first four matches as I missed most of it.

Hmmm, a lot of title changes on this show.

Felt for sure Naito was going to win that match. rematch in the cow palace perhaps?

Poor Naito got fucked up in that match

Well, that was unexpected… Jericho for G1?

WOW! What a war! This was a fun match. Did not see the ending happening. You have to wonder about Cow Palace like was mentioned above. By the way, Naito has lost 3 times at Dominion in the last three years: Okada in 16, Tanahashi in 17, and Jericho in 18.