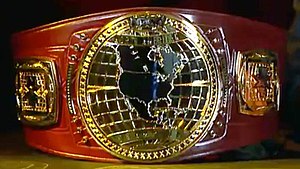 What do you guys think of it? I think it looks great. Its something different and feels very old school.

Really digging it myself. Finally, it’s fun to see WWE stop creating new belts looking all exactly the same. Old school belts like this one are the best.

I like The Mid South North American heavyweight title

I like it but it’s a very different look to all the other NXT titles that are sort of uniform. It’s going to stand out but I don’t know if that’s a good thing or not when the rest of the brand fits together nicely.

That being said, the UK title has become a defacto NXT championship these days and looks nothing like the world, tag and women’s belts on the show, so maybe it’ll just be the case that the regional titles look different.

I like it. It doesn’t match with the other NXT belts at all, but maybe it’s a sign that we’re getting new championships. Although that would be odd, since the current championships haven’t been around for that long.

Thought people hated the red strap…I guess it’s because there’s no WWE logo on it.

I never had an issue with the color myself. I just don’t like having the same looking titles for everything.

I like the fact it breaks the NXT uniform of the giant X in the middle. I agree it’s very old school and it suits the name. Although I may have to wait to see how it looks when a wrestler is actually holding/wearing it.