We’re less than a week away and there is a grand total of three matches (one of which is a “wargames” match where one person has yet to be announced).

First of all, why are we having these “wargames” matches? What is the reasoning behind them? What do the winners get? Why are NXT people having multi-wrestler matches on Saturday and then on Sunday at Survivor Series? Why is half the roster injured?

All I hear about from NXT fans is that they have the best storylines and best builds, but the moment they have competition in AEW they put together this garbage card? Why even bother having this show in the first place if Survivor Series is almost the same thing?

The whole invasion has been bust, NXT keeps losing to AEW and they haven’t built anyone since the “war” began.

I would agree SS hurts the build for Wargames. I also have an issue with gimmick PPVs in most cases (royal rumble makes sense) because they don’t have a reason to have the gimmick matches. Neither Wargames match really makes a ton of kayfabe sense. I think they will be good matches and can use this show to build some bigger storylines. When I think NXT stories it is more long term stuff than short term builds.

As for SS I think the concept (especially the elimination tags) is awful. There are ways you can make it work but I think you need authority figures to make the brand competition meaningful, and have stakes for the wrestlers and the shows.

I would say that Wargames hurts SS just as much as SS hurts Wargames.

The fact that on one night there is NXT talent in Wargames matches against each other who will then be having to work together at SS in the elimination matches is just stupid.

It’s probably going to be the worst TakeOver/WWE PPV weekend they have had.

I disagree about that as it doesn’t look like we are getting competitors teaming up for SS from war games.

It looks like the women’s side of things for the 5 person team will be Ripley, Yim, Lerae, Nox, and Kai. Which is one side in war games + one person. So unless they switch Io or Bianca into that match I don’t see an issue. On the men’s side unless the out Cole on the SS team or Balor I again don’t see the enemies teaming up in their matches. I think the issue is trying to tell both stories simultaneously which hurts NXT but not the “main roster” and people selling the damage from Wargames which again only hurts NXT (unless that is the reason they lose but even then it still hurts).

The only way it really hurts SS is that 15 person triple threat elimination matches sound awful.

I feel like WarGames and Survivor Series both needed a longer build to logically get us to “NXT vs. WWE” rather than “NXT vs. Raw vs. Smackdown”. Then you can have the two PPVs exist in the same universe and play off of each other instead of these weird situations where guys (especially on NXT) are feuding and teaming with each other simultaneously.

On a related note, is there any chance that Triple H ends up on the NXT team? Seems logical to me but I would think that would be made public by now if it were the case. (I personally would love for it to be a surprise on Sunday, but I also think WWE would never “waste” a Triple H appearance with no promotion, since he’s the biggest draw in the history of history.)

The booking all over sucks. I shouldn’t need a scorecard to know who is on which team on which show. And what does the winning brand even get anyways? None of it makes any sense and is far too complicated.

War Games is supposed to be a vicious match that back in the Network days you could get away with all 8 competitors not competing for 2-3 weeks. Fish, O’Reilly and Strong all have matches the next night. There was no reason for 2 war games. Give the women the match and you could’ve had 3 separate matches where Undisputed Era defends their titles against Ciampa, Lee& Dija, and the obviously returning Dream. The Main Roster has screwed developmental again, if you wanna go back to Cornette having his OVW Main Event feud team with each other on Smackdown or Hunter having his Wrestlemania weekend main event team up on Smackdown… Hey wait? The women on NXT helping Shayna on Smackdown just a big mess

Now here’s something from the very reliable Wrestlevotes account 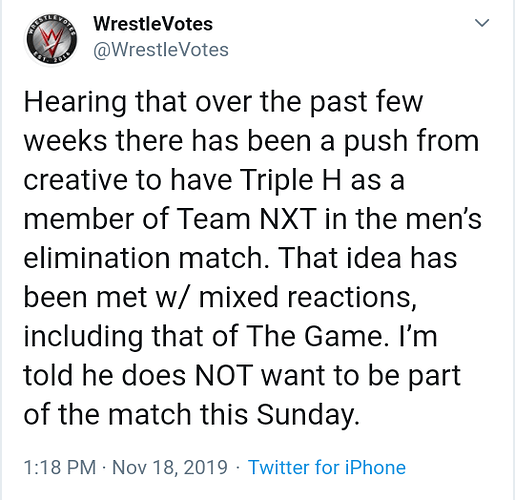 If it’s true that Triple H doesn’t want to be in it, that makes me think that NXT is going to win. As much as “lol HHH wins” used to be thing in the early 2000s, I think he’s smart enough as a booker to not show up and steal the spotlight from his guys.

But we’ll see. As we all know, it’s not like the currently planned finish means much of anything six days out.

Win or lose he shouldn’t be on the team. I feel like he has already big footed the talent during this invasion. Unless he is like the first elimination, there is really not a good outcome with him on the team.

I’m not a fan of the Riddle/Balor match, because I dont think either should lose right now and Riddle has lost too much. They were in a bind though with the Gargano injury.

I cant hate on the Wargames matches. I wish there was only 1, but I love Wargames and we didnt have it for so long, so I will take it.

I also think Adam Cole has to be on the NXT team at SS. He’s been the key guy for them in this story and if he isnt in the match, where is he going to be?

Not sure what you do with Cole at SS, but that is largely due to WWE not thinking out putting their main belts on Brock and The Fiend.