UPDATE: On Monday night, the Volusia County record of Hardy’s case stated he was released at 7:45 p.m. ET.

Jeff Hardy was arrested on Monday in Volusia County, Florida. POST Wrestling has learned of additional details through the police report that was filed.

Hardy was arrested by Trooper Zach Steiner in Volusia County after Florida Highway Patrol officials received calls about an impaired driver along I-95. The incident was listed as occurring around 12:30 a.m. late Sunday/early Monday.

Hardy was said to be arrested without incident and is facing three charges including driving under the influence, driver’s license restrictions, and an interlock violation from a previous DUI.

The report was filed at 11:14 a.m. ET after Trooper Zach Steiner responded to reports of a Dodge Charger swerving all over the roadway, according to the police report. (Earlier we had stated that the incident occurred at 11:14 a.m. but have corrected that error).

There were four callers that called 911 to report the vehicle and poor driving pattern. Steiner stated he caught up to the vehicle and observed it “going significantly under the speed limit, weaving across travel lanes and running off the shoulder of the roadway.”

Steiner stated in the report, “The driver did not immediately pull over and failed to pull over in a safe manner. The vehicle eventually pulled over onto the northbound outside shoulder of Interstate 95.”

Steiner went on to describe issues he had gaining the attention of the driver and noted, “The driver appeared to be in a stupor and confused. I maneuvered to the driver’s side and then issued verbal commands to place his hands on the steering wheel. The driver was compliant with this request.”

The report states that Hardy “reeked of an odor of an alcoholic beverage” and said that the driver had been drinking earlier in the day.

Hardy consented to a field sobriety test on the spot and it was noted that “Hardy’s performance on the exercises provided more than enough clues necessary to affect an arrest for the offense of DUI. J. Hardy displayed severe nystagmus, was unsteady on his feet, and could not complete any portion of the exercises successfully or without risk of falling.”

ESPN’s Marc Raimondi reports that Hardy is scheduled to appear in court on Tuesday at 1:30 p.m. local time. Additionally, Raimondi notes that Hardy’s breath test registered a level of 0.294 and a second test registered 0.291 with the legal limit being 0.08 in Florida.

He was at FOUR times the legal limit. That’s the equivalent of 15-16 drinks added to whatever prescription pills and/or other drugs he had in his body.

When I was a deputy sheriff I frequently had people blow this high and they could barely function. This day and age with Uber and everything else there is zero excuse to drive drunk or high.

Absolutely amazing he didn’t kill someone including himself.

After so many chances, would time in prison be necessary?

More importantly, I’m done feeling sorry anymore for one of my childhood heroes. The drugs, the alcohol and the bumps are his personal choice. However deciding to drive in that state is unacceptable. Just call a cab, an Uber or whatever. It’s really that simple. Don’t put the lives of others at risk for no apparent reason.

Reby Hardy had chimed in… Okay, i realize the timing is a bit questionable; but…officer Steiner? Kayfabe is alive

NO! Jeff Hardy and DUI? Who would have thought that!!! God signing AEW.
That‘s sarcasm by the way. Fire this guy. Now

I guess this is AEW’s first real test on how they are going to handle a matter like this (at least that I can think of). This is an especially bad look since we left WWE because he refused to go to rehab and AEW picked him up, obviously the issues didn’t go away. Hopefully they do the right thing and give him an ultimatum as well as this isnt a first offense, second offense etc. This is a regular occurrence for him.

Either way, I wish him the best. So sad seeing a legend go through this.

@MATTHARDYBRAND
It was disheartening to hear the news about my brother yesterday. Recovery isn’t a linear process & I’ll continue doing whatever I can to help my brother be healthy. Being healthy & well is the most important thing for Jeff, his wife, his children & our family at this time.
kliq June 14, 2022, 3:53pm #11

It’s such a tricky illness. On one hand there is no doubt that he suffers from some type of mental health issue that leads to him drinking/doing drugs. On the other hand, he made the choice to get behind the wheel and that choice easily could have killed other people. At what point do we stop feeling bad for a person and hold them accountable for their actions.

I don’t have that answer, but I just hope he gets clean before he hurts himself or someone else.

Personally I’m somewhere in the middle, I do feel for him, but I’m also disappointed with his decision.

Weird of AEW to just ignore this and the match. Would have expected a statement at least 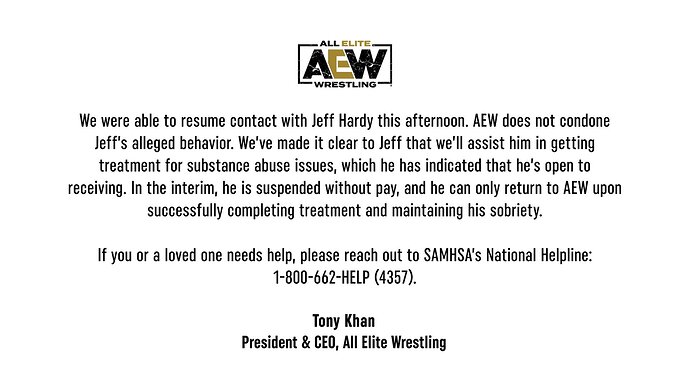 @davemeltzerWON
AEW didn't release the statement until Khan had a chance to talk it out with Hardy.

@SeanRossSapp
AEW higher ups tell us that they wanted to wait to get in touch with Jeff Hardy before issuing a comment or statement on the matter.
2 Likes
kliq June 14, 2022, 8:39pm #15

The response is good from Tony, he seems to be handling it the right way. The only thing I don’t understand is the use of the word “allegedly”. Isn’t a DUI pretty black and white? Or is there something I’m missing?

I mean, unless he’s convicted - I believe legally, all of this is alleged. Despite being on camera and cut and dry.

Ya I guess……it just sounds weird for a situation like this. It would be like saying a few years back “Ray rice allegedly punched his wife” when it was on camera.

Either way, overall I like the way it was handled.

Good response. Options were that or release him.

He probably shouldn’t be wrestling for a while so I think this was the better call.

It’s such a tricky illness. On one hand there is no doubt that he suffers from some type of mental health issue that leads to him drinking/doing drugs. On the other hand, he made the choice to get behind the wheel and that choice easily could have killed other people. At what point do we stop feeling bad for a person and hold them accountable for their actions.

I feel bad for him. It’s a terrible disease and this country is pretty terrible at helping with addiction.

But I also want to see legal and professional consequences at this point.

He crossed the line as soon as he got in the car.

Agreed. Addiction is an illness. Not calling an Uber is a crime.

Compare him vs Mox for example

You also have to blame Matt Hardy IMO. Saw him say today that he can’t be around Jeff all the time - well then find someone who can.

Matt went to bat for Jeff and it’s turned into an embarrassment. He needs to be looking after his troubled brother much better