**Wai Ting and WH Park have an excellent G1 Primer show up on the site with a breakdown of how the tournament works, its history, a preview of each performer with their background and status coming into the G1. I highly recommend this show if you are going to be watching the tournament. It can be downloaded at https://www.postwrestling.com/2018/07/11/post-puroresu-g1-climax-28-primer-w-wh-park-wai-ting/ and available on the POST Wrestling podcast feed.

**Wai Ting and I have a new Rewind-A-SmackDown posted with a review of Tuesday’s show featuring a ten-man tag main event, ‘NSYNC references from Kane, a lumberjack match between Asuka and James Ellsworth, and AJ Styles vs. Shinsuke Nakamura. On the show, we also preview Sunday’s Extreme Rules card, take your feedback, discuss our health & more.

**A new British Wrestling Experience with Martin Bushby, Oli Court & Benno will be coming out later today. We will also have a new upNXT on Thursday with Braden Herrington and Davie Portman.

**The deadline to submit your picks for the POST Wrestling G1 contest is Thursday night at Midnight Eastern. Our first G1 review will drop Saturday for members of the POST Wrestling Café and a second one will be released Sunday following the first A Block and B Block shows.

**New Japan Pro Wrestling has posted an update on Hiromu Takahashi that he has been flown home to Japan to proceed with his treatment. The extent of his injury is unknown as New Japan has not commented on the severity. During Saturday’s match with Dragon Lee, Takahashi landed on his head taking the Phoenix Plex, however, Lee lost his grip and unable to execute the bridge portion of the maneuver. The match continued with several more maneuvers and Takahashi winning with the Time Bomb. Takahashi was able to make his way to the back but was taken to a hospital in San Francisco that night.

**Tuesday’s episode of SmackDown Live averaged 2,183,000 viewers on the USA Network… It was up 8.4% from last week’s average, although last week was SmackDown number was the second lowest viewership average since the brand split in July 2016.

**Monday’s episode of Raw did poorly with an average viewership of 2,460,000 viewers on the USA Network. The show started with 2,582,000 viewers, dropped to 2,508,000 viewers in the second hour and crashed with 2,320,000 for the final hour. The main event involving Seth Rollins had the opposite effect this week as compared to the Dolph Ziggler match several weeks back, which grew the third hour. News programming was big coming off President Trump’s announcement of the Supreme Court nominee with Fox News’ programming from 8-11 pm all up big from last Monday. Tucker Carlson from 8-9 pm was up 22%, Hannity from 9-10 pm up 104%, and The Ingraham Angle from 10-11 pm was up 34%.

**The WWE has announced that Kaitlyn (Celeste Bonin) is the first entrant for the Mae Young Classic this August. The 31-year old had a bodybuilding background before signing a developmental deal with the WWE in 2010 and assigned to Florida Championship Wrestling. She won the third season of NXT and would go on to win the Diva’s championship in January 2013 and feuded with AJ Lee. She remained with the company until 2014 when she opted to leave and return to the fitness industry. She began a comeback to professional wrestling last year and recently spoke about a possible WWE return during an interview with Chris Van Vliet. The Mae Young Classic is scheduled to take place from Full Sail University on August 8th and 9th.

**Here are the matches for tonight’s episode of NXT at 8 pm Eastern on the WWE Network:
*Tyler Bate & Trent Seven vs. Roderick Strong & Kyle O’Reilly for the NXT tag titles
*Adam Cole vs. Danny Burch
*Kairi Sane vs. Vanessa Borne

**Tonight’s episode of Lucha Underground features Mil Muertes taking on Cage for one of the Aztec Medallions at 8 pm Eastern on the El Rey Network.

**Goldust (Dustin Runnels) underwent surgery on both of his knees on Tuesday under Dr. Jeffrey Dugas in Birmingham, Alabama. The procedure was said to be a success but there was no timetable listed for his recovery process. Runnels turned 49 years old this past April.

**The New Day will take on Sanity on the Extreme Rules kickoff show this Sunday at 6 pm Eastern from the PPG Paints Arena in Pittsburgh, Pennsylvania.

**They have also added a stipulation to the SmackDown women’s title match with James Ellsworth suspended above the ring in a shark cage for the match between Carmella and Asuka.

**Dwayne Johnson recently did a sit-down interview with Jamie Foxx and discussed a decision made over a decade ago to distance himself from professional wrestling. This happened in 2005 when the management of Johnson pushed him to ease off the use of “The Rock” moniker and took place after his contract at WWE expired at the end of 2004. Johnson did not show up for any WWE-related events until the 2008 Hall of Fame ceremony and then another exodus until returning in 2011. Prior to his return to the WWE to host WrestleMania and the subsequent matches with John Cena, Johnson acquired new management and embraced both wrestling and “The Rock” name. The interview with Foxx is for an upcoming digital series called “Off Script”.

**Ring of Honor will return to the UMBC Event Center in Baltimore on October 13th for “Glory by Honor”. The promotion ran the venue for the first time last month for the “Best in the World” pay-per-view and drew very well in the larger arena. Tickets for the show go on sale July 18th for Honor Club members and July 20 for the public.

**MLW has announced they will be holding a “War Games Match” on September 6th in Fort Lauderdale, Florida and promoting the match under that name. Chris Harrington of the Wrestlenomics podcast reported that MLW registered for the trademark earlier this year with MLW CEO Court Bauer noting that they have the IP.

**New Japan World recently produced a documentary on Minoru Suzuki, which is subtitled in English. I have not seen it but am told it is very good.

**Viper has been added to Ring of Honor’s Re-United tour event on August 16th in Edinburgh, Scotland.

**The Back Body Drop site looks at the price points for professional wrestling shows in the United States and the UK.

**There is a report from BuzzFeed News that the Sinclair Broadcast Group, the parent company of Ring of Honor, is looking to launch a streaming television service this year as a competitor to Fox News. The report states that the streaming app would host a 24/7 channel that would feature local news and national programming, along with live and on-demand programming consisting of television shows, movies, and sports. Sinclair is opted not to comment on the story.

**Jeff Jarrett will be hosting a one-man show in Sheffield, England on Wednesday, July 25th and it will stream on FITE TV that day at 3:15 pm Eastern.

**Legendary Japanese wrestler Shinya Hashimoto passed away on this date in 2005 at the age of 40. Along with Masahiro Chono and Keiji Muto, the three were dubbed “The Three Musketeers” of New Japan as the pillars to lead the company into and through the 90s. The first G1 Climax featured the three booked prominently, including Hashimoto scoring victories over Riki Choshu and Bam Bam Bigelow in the round robin portion and Chono winning his first of five G1s. Hashimoto won his first IWGP heavyweight title in September 1993 from Muto, who had held the title for over a year. He won it twice more in his career, including a 489-day title reign from April 1996 until dropping it to Kensuke Sasaki in August 1997. Hashimoto’s record length as champion stood until Kazuchika Okada surpassed the mark with his most recent title reign.

One of his most famous programs was with Olympic judo silver medalist Naoya Ogawa, who joined New Japan in 1997. Hashimoto was IWGP champion during this time and New Japan was negotiating to bring Ken Shamrock in for a program with Hashimoto, but Shamrock signed with the World Wrestling Federation and led to Ogawa getting the spot with Hashimoto. In their non-title match at the Tokyo Dome in April 1997, Ogawa choked him out cold to make an instant impression towards the audience. Hashimoto defeated him the following month, but their most famous match was on January 4th, 1999, in a match that ended in a no contest. Ogawa began legitimately attacking Hashimoto with the belief at the time that Ogawa was following the instruction of Antonio Inoki to create a controversy for maximum believability. It culminated in a Tokyo Dome main event in April 2000 with Hashimoto putting his career on the line and losing again to Ogawa.

It was thought Hashimoto would begin operating a New Japan satellite group called “Zero”, instead, Hashimoto legitimately left New Japan that year and formed Zero-One, which started regular events in March 2001 and served as Hashimoto’s promotion until his death in 2005 from a brain aneurysm. His son, Daichi, began wrestling in 2011 and wrestles for Big Japan Pro Wrestling.

**Greg Hardy is scheduled to fight on one more episode of Dana White’s Tuesday Night Contender Series this season. It was reported by ESPN that Hardy will fight 3-0 fighter Tebaris Gordon on the August 7th episode. Hardy stopped Austen Lane in 57 seconds last month on the show and was awarded a developmental deal with the promotion.

**Bellator has announced that David Schwarz has been named the promotion’s Senior Vice President of Marketing and Communications. The release lists Schwarz’s responsibilities as overseeing Bellator’s development in consumer marketing, communications, social media, ticket sales, and digital. Schwarz worked at the USA Network before coming to Viacom in 1999 and played a big role in their rebranding of TNN to Spike TV in 2003.

**There were some amazing scenes caught on camera in the UFC’s “The Thrill and the Agony” preview, including an incredible moment shared between Daniel Cormier and Cain Velasquez backstage after the UFC 226 main event:

G1 PRIMER WITH WAI TING & WH PARK
A preview of New Japan’s G1 Climax tournament with profiles of each participant, history of the G1 and storylines going into this year’s event
https://postwrestling.podbean.com/mf/download/kekzp6/180711_PURO_G1_PRIMER.mp3

News shouldn’t be accounted for in entertainment genres, no matter how stupid it is now. And has always and will always have high ratings if you look at their numbers since tv became mainstream…why else is Fox doubling down on it? 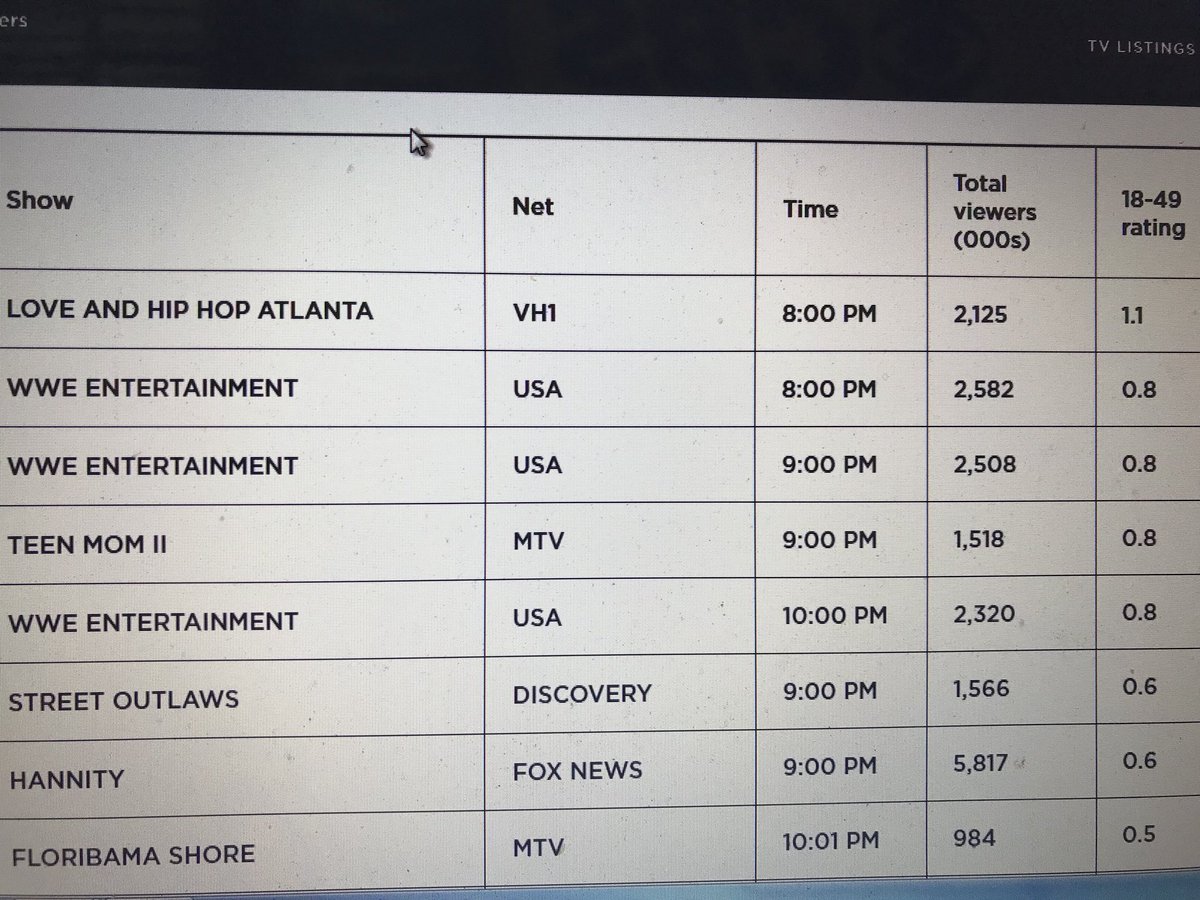 Maybe we should lay Nielsen to rest like Frank Drebin.

The WWE has announced that Kaitlyn (Celeste Bonin) is the first entrant for the Mae Young Classic this August.

Great update @johnpollock … Thanks for the hard work

MLW did do a war games during it’s original run as well so it doesn’t surprise me that they’re doing it again.
I am a little surprised that Kaitlyn is coming back but she’s definitely stayed in great shape, I’d argue got in better shape than her original run. Also knowing it’s the Mae Young Classic, there’s a great chance she’ll be in there with some of the best in the world who can help her get rid of any rust fast.