**On Rewind-A-SmackDown, Wai Ting and I discussed the release of Zelina Vega and the many issues involved, as well as Chelsea Green’s injury moments earlier on the show, along with a complete review of SmackDown and lots of calls. This show is available for all members of the POST Wrestling Café.

**Wai Ting and I will be back Monday night with Rewind-A-Raw.

**Andrew Thompson will have an interview with MLW’s Myron Reed later this week on the site.

**John Siino has a great review of Saturday’s IMPACT Turning Point show that featured a lot of news and several title changes.

**Hours after her release from WWE, Zelina Vega (Thea Budgen) was on Twitch reacting to the news and speaking to her fans. She was very emotional in the wake of the announcement but wasn’t going to say anything bad about anyone, that there’s a reason for everything, and “it will pay out even if I don’t see it right now.” She added it was probably the worst day of her life but remains grateful.

On the creation of her OnlyFans account, she said it was not done with any malice towards anything stating it was an outlet for cosplay outfits, and those that helped launch it put a lot of work and time into it.

She said it was hard for her to slow down and do nothing when her schedule was reduced during the pandemic and that her mental health is always the most important thing to her.

It was reported by PWinsider.com that she does have a 90-day no-compete clause and then is free to pursue work elsewhere.

The news of her release has garnered a lot of publicity because of the questions it raises over the independent contractor label and Vega becoming the public face of the story of third-party restrictions. Time will tell if this grows into something substantial or is something that has fleeting attention from the outside world. In MMA, it wasn’t the exact circumstances but there are parallels to UFC’s decision to not offer a new contract to Leslie Smith, who was on a three-fight winning streak, and how transparent it was that Smith became a headache they didn’t want with her push for a fighter’s union or association.

**Gabrielle Carteris, who is the current president of SAG-ACTRA, publicly reached out to Vega thanking her for “standing strong for labor solidarity” and asked the performer to email her.

Vega tweeted out the following Friday evening after the news broke of her release:

I want to say thank you all very much for the last 3-4 years @WWEUniverse, it was incredible. I would have never have been able to say “this is for you dad” if certain people did not believe in me. I love you all and I couldn’t have done it without your support 🙏🏽 pic.twitter.com/R4fI9r64Vm

**Stardom has announced its biggest show ever as they plan to run Budokan Hall on March 3, 2011, for the 10th Anniversary. The company issued a press release stating they will hold a special tournament called the “All-Star Dream Cinderella”

**In the main event of Dragon Gate’s Kobe Pro-Wrestling Festival on Sunday, Shun Skywalker won the Open the Dream Gate Championship from Eita. Eita had won the title back in August and was looking to make his second defense. Skywalker is only 24 years of age and has been wrestling since he was 19 and considered a huge part of Dragon Gate’s future.

**WWE star Alexa Bliss (Lexi Kaufman) announced that she and boyfriend Ryan Cabrera are engaged after Cabrera proposed on Saturday night. The engagement occurs one year after the pair met:

One year ago we said hello, tonight I said YES 🖤 @ryancabrera pic.twitter.com/PLhVha2goK

**Chelsea Green posted an update Saturday morning that she was getting prepared for surgery after breaking her wrist the night prior to Friday Night SmackDown. Green posted a photo Sunday with her right arm in a sling and it’s unknown what the timetable for recovery will be.

Just like the rest of my career, I couldn’t have an easy debut! LOL, that just wouldn’t be fit for my wild journey. I’m headed into surgery now. I am beyond devastated but so excited to be a part of @WWE team SmackDown, when I get back!

**IMPACT’s Turning Point special featured two championship changes as The Good Brothers (Karl Anderson & Doc Gallows) defeated The North (Ethan Page & Josh Alexander) to win the IMPACT tag titles. In a No DQ Match, Deonna Purrazzo regained the Knockouts Championship from Su Yung after losing the belt to Yung at Bound for Glory last month as Yung was a last-minute replacement for Kylie Rae. The other news involved the arrival of former Triple Crown champion Joe Doering to assist Eric Young and attacks The Deaners.

**IMPACT Wrestling’s next special will be Final Resolution on Saturday, December 12th streaming on Impact Plus and FITE TV.

**Ring of Honor will be making an announcement regarding Final Battle later this week.

**AEW is releasing a documentary entitled “The History of a Revolution” from Director X. The company has announced it will be coming out this Wednesday.

**Randy Savage a.k.a. Randy Poffo would have turned 68 years old today. Savage was one of the cornerstones during the WWF’s expansion era culminating at WrestleMania 4 winning the WWF championship stepping into position as the babyface champion that Hulk Hogan had occupied since 1983. His active career largely ended by 2000 after six years in WCW making a random cameo in May 2000 and never used again by the company. He resurfaced in TNA in the fall of 2004 but was largely out of the spotlight by that era and in the ensuing years before he died in May 2011.

**The UFC Fight Night card was highlighted by a strong main event between lightweights Rafael dos Anjos and Paul Felder with dos Anjos winning by split decision. It was a fairly dominant performance from dos Anjos, although the fight was very competitive. Judge Chris Lee somehow scored it 48-47 for Felder and was one of the more puzzling scorecards in recent memory. The other two judges scored it 50-45 for the winner dos Anjos and were more in line with the popular opinion of how the fight went. Even Felder looked shocked when they read the card for him.

Felder’s interview after the loss was scary as he noted cutting more than 22 pounds in four days to make the weight limit and called Thursday night “one of the darkest nights of my life” but said he isn’t going anywhere after toying with retirement after the loss to Dan Hooker this past February.

Afterward, dos Anjos made the challenge to fight Conor McGregor. Most were dismissing that option given dos Anjos just returned to the division after a .500 record at welterweight (although fought most of the top guys at the weight class) and that he’ll another big win at lightweight before he is in the top mix with McGregor, Poirier, Gaethje, and Nurmagomedov (depending on the latter’s status after stating he was retiring at 29-0).

Of course, dos Anjos was set to fight McGregor in March 2016 and it was his injury that opened the door for Nate Diaz to replace him and led to one of the most memorable fights of the past decade where Diaz submitted McGregor at UFC 196.

**Prior to Saturday’s UFC Fight Night card, Louis Smolka was pulled from the show after being deemed “medically unfit” for his fight with Jose Quinonez. Smolka missed weight by three pounds for their bantamweight fight and the removal from the card was not related to COVID-19.

The possibility of SAG getting involved is really interesting. Starting up a union from scratch, let alone one dealing with the very unique situation of WWE workers, likely feels impossible, but SAG seems like it’d be a good fit, especially considering it counts stunt workers amongst its members.

Does anyone know if those that have been in movies (ie. Moxley, Orton, Becky, Big Show etc.) If they are in SAG?

I seem to recall guys like Ventura, Funk and Piper would book acting gigs every year or so, to keep SAG membership, specifically for their health insurance.

I’m not typically one to care about spoilers, but it’s very annoying that Stardom is so slow to upload shows.

Doesn’t it have something to do with the fact that basically, wrestling shows aren’t shot in a seasonal format? IIRC, I read a few days ago that technically, Lucha Underground was SAG eligible because they were basically shot like any regular TV series with a start and a season finale. I’m sure that the independent contractor status has something to do with it as well, though.

Can’t speak to the requirements for SAG, but this is as good a time as any to mention this: the touring exhibition of Guillermo del Toro’s Bleak House (a portion of del Toro’s massive collection of art, pop culture ephemera, and general wonderment) includes El Santo’s membership card for the Mexican Asociación Nacional de Actores, ie, the only known photo of El Santo unmasked. I saw the exhibit in LA and was absolutely gobsmacked, and spent the rest of the visit trying to explain to my non-wrestling fan friends why this was so improbable. By happenstance I bumped into del Toro a couple of years later at a bookstore and spent a few minutes geeking out with him about what an amazing piece of lucha history he was lucky enough to have.

Two other notable things from New Japan’s card yesterday: Great-O-Khan revised his look, and Tama Tonga cleaned up his. 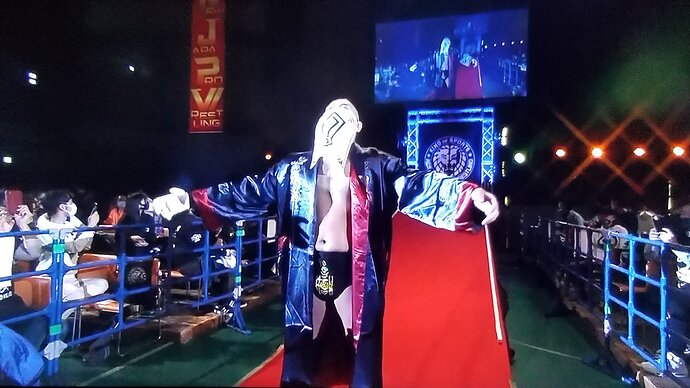 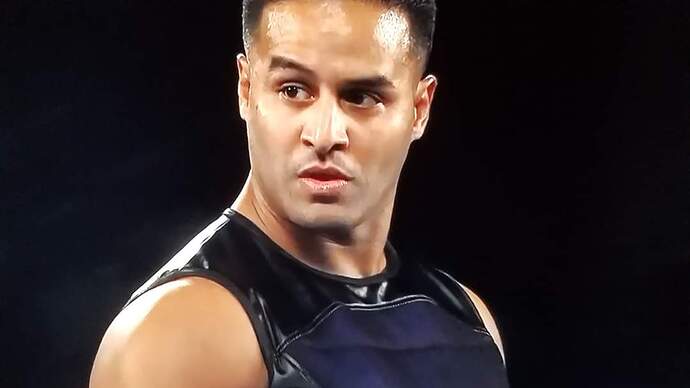 I very well may be wrong about this, but when an actor signs on to do a movie, I’m pretty sure they aren’t becoming an employee and like wwe wrestlers they are independent contractors.

It depends. If they are signed to a franchise (Marvel, Star Wars, etc.), I believe they are employees. I remember Disney also having some really strict diet and training restrictions for the Avengers movies, plus the actors going around the world promoting the film.