John Pollock and Wai Ting are joined by Conrad Thompson (Something To Wrestle with Bruce Prichard, What Happened When with Tony Schiavone) for an in-depth discussion about wrestling podcasting in this month’s POST Roundtable: 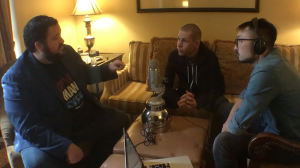 WATCH: A video version of this interview is available for Double Double, Iced Capp and Espresso patrons of the POST Wrestling Café.

AWESOME JOB GUYS! I could have listened to this for hours.

When I had the wwe on demand I would watch raw aND nitro replays every week just because they had a bumper with Michael cole or Renee paquette. It’s so easy to do and they don’t bother.

Impact promotes their gwn and the wrestlers wwe has like aj and Bobby roode much better than wwe does with his network.

Maybe you guys should get into the mortgage industry. House prices are sky high in Toronto.

I will say from my experience, I joined the Patreon because I wanted to listen to something about Wrestle Kingdom 12, and no one had done a sufficient job, and yours was behind a paywall. I probably wouldn’t have signed up if it weren’t for the content I was looking for being behind the wall, and having listened to the g1 coverage last summer knowing it was exactly what I was looking for. That being said, a couple months in, and if all the content was offered for free, I can’t see myself stopping paying as I’m hooked now and definitely don’t want to see this ever end. So there are some benefits to having blocked content.

This was a wonderful conversation that I enjoyed in ways I had not previously enjoyed when listening to Conrad talk with others who cover broader media (he did a great chat with Richard Deitsch a year ago). I think why I liked this chat so much is all three guys - Conrad + John and Wai all seem to have a very keen understanding of the wrestling fan and how to use that understanding to elevate the podcast medium in this genre.

I am glad WWE is open to having a podcast show like theirs on its network and wish they’d be more open to outside endeavors coming in as well. I think well thought out commentary and reviews are things wrestling fans do enjoy and the WWE should look to capture that on it’s network, even if it means giving up some control or opening itself up for unbiased review.

Conrad is spot on about how podcasts leads to more WWE network subscriptions. I used to bounce on and off of the network to catch PPV spending only 60 or 70 a year. However I have been subscribing non stop since post wrestling was launched so I could keep up with rewind-a-wai.

Great point by Conrad that the WWE are struggling to get people to engage with the older content. I’ll be curious to see if there are spikes in old content after they are referenced on offical panel shows/podasts like ‘Bring it to the table’ or the Cornette pod.

This was a lesson in the ways the podcasting business works.

Must listen to anyone interested in starting their own.

Great show! I would love to see Conrad Thompson return as a guest in the future.

As someone that listens to a lot of podcasts (not just wrestling) this was a fun discussion to hear about. I agree with the general consensus that WWE is missing out on podcasts. Not just on the network but in Audio format too.

It’s crazy to me WWE doesn’t have a podcasting home (like Post Wrestling) where I can subscribe and get podcasts from their stars (Austin, Jericho, E&C), behind the scenes guys/gals (Renee Young, Lilian Garcia) and weekly update shows with Graves and Kathy Kelly. The New Day need a podcast or at least an extension of Up Up Down Down! If they were all professionally produced by WWE and coordinated with each other they wouldn’t see the same guest on all the podcasts each week.

And here’s a million dollar idea for someone out there. An in depth history of wrestling podcast. Like “What you weren’t told in history class” for pro-wrestling. The best parts of the recent Andre and Flair documentaries is that they touched on the territory era. There seems to be so many fascinating stories and people in that time period that I never hear about. I would love a weekly profile podcast on the old-timey wrestlers, the dirty tricks and drama between territories, etc.

I subbed to Patreon partly because of this particular episode.

This gave me a greater appreciation for the work that goes into a podcast, and why some wrestling podcasts work better than others.

“Something to Wrestle” wasn’t my cup of tea on my first couple of listens, but I’m willing to give it another shot now that I understand the reasoning behind its format and the labor behind each show.

Obviously there’s many ways to monetize. It’s important to have several different avenues for the listeners to do this as each particular customer will pick his/her way of supporting the content.

Not sure if this way is in the cards but I’d suggest (considering) creating an Amazon wish list. With the Post Production Videos as part of the content, sprucing up the ol’ Post Office with wrestling figurines or similar items could assist. (and I’m not commenting on how it looks, I haven’t seen any of those videos as of now) I would chuck as many things onto this wish list that would help: Tim Horton’s gift cards, K cups for Wai’s dad, gas cards for John’s travels, and all the wrestling or supplies stuff that would be of use. Heck, this whole process could be done for free (as the address isn’t show to ‘givers’), but a simple Post Office Box could be more convenient and the only cost incurred. If someone doesn’t wish to contribute this way, then they simply won’t click on it. If it doesn’t provide fruitful (though I’ll bet it does as the Patreon’s numbers are well beyond your initial expectations), no harm in taking it down. Postmarks would probably get a kick on seeing something they bought for you in one of your videos.

Not sure if this way is in the cards but I’d suggest (considering) creating an Amazon wish list.

I actually really, really like this idea. Would be nice if we could choose to buy gifts as just a nice gesture.