Braun’s standing amongst hundreds of things for sale on the website and he says:

Here’s one that bugs me that I think is an easy fix… let guys win with their “secondary moves” every once in a while. How am I supposed to buy a false finish after a Randy Orton draping DDT or Sami Zayn’s Blue Thunder Bomb was they have rarely (if ever) won with those moves? I think if WWE committed to this for an extended period of time, it would add to some of the drama and cut down on the “match doesn’t start until Cena’s first AA (or Brock’s first F5 or whatever)” reaction from crowds in big matches.

Currently, it feels like the only three acceptable pinfall finishes are finisher, roll-up or superkick.

let guys win with their “secondary moves” every once in a while.

Good one! Don’t even need to do it much to have the needed effect.

I always start laughing when Zayn hits the B.T. Bomb as the crowd still seems to bite on that one even though no one has been finished on it since the Missing Link (shameful exaggeration by me there).

Steal finishers. Like I remember in the old WWE PlayStation games I could use my opponents finisher with enough juice. I’d like to see guys use other guys finishers.

If I’m in charge of social media, every member on my roster would have 2 twitter and 2 Instagram accounts (maybe facebook also). Obviously one would be the ‘wrestler’ account and the other would be the person playing the wrestler. The wrestler accounts would be uniformed, i.e. @ WWE_theCobra (no, I’m not signing with them). It would be much ‘cleaner’ to develop storylines and have a smoother separation with stuff such as heels promoting charities (and other benefits also). I’m sure most fans would follow both accounts.

Institute a form of an off-season in WWE. Or, more specifically, rotate the talent on TV every 2-4 months.

Swap out wrestlers as feuds end, so the transition isn’t as jarring as a traditional TV series’ break in-between seasons. Elevate SummerSlam to the level of importance of Wrestlemania as a brand, so that no one feels slighted if their TV cycle happens to fall outside of the traditional Wrestlemania build but coincides with the road to SummerSlam.

Additionally, allow the wrestlers to take company-approved bookings outside of their TV time, to allow them to boost their own income while saving on the costs of year-round contracts.

This allows wrestlers a degree of financial stability if they choose to rest during their mini-offseason, and keeps talent fresh from a creative standpoint. It also grants more main-roster TV time for new talent, and takes advantage of the enormous roster that WWE has acquired.

Additionally, allow the wrestlers to take company-approved bookings outside of their TV time

I’m not an expert on the exact law on this matter, but if you’re treating them as ‘independent contractors’ then this should already be the case. I don’t see a situation in which you’re not providing employee benefits and at the same time you’re holding them to ‘exclusivity to your company’. One or the other.

Re: Hardy and Wyatt

When Bray comes back and joins Matt they can become the:

I posted this on March 24th in the ‘Re: Hardy and Wyatt’ thread. 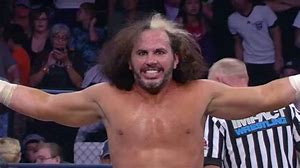 Have an all female PPV. Perfect time for it and it would counterbalance the Backlash from the Greatest Royal Rumble.

Tommaso should wear a new shirt …