Chaotic Wrestling is proud to announce the inception of a brand new title centered around inclusivity. In the post Speaking Out world it is more important than ever to create safe environments for people to train, watch, perform and engage with Professional Wrestling. Chaotic and the New England Pro Wrestling Academy aim to be at the center of that movement. The Pan-Optic Championship will be taking the place of what was the Chaotic Women’s Title as we look to remove any gender bias from affecting match ups or the overall perception of the wrestlers involved. Therefore the Pan-Optic Championship will be genderless, non-binary and without exclusion. Those battling for the title will share these ideals that a wrestling match should be judged on the quality of the content in the match and the talent of the wrestlers competing with no regard to the identity of either individual.

Chaotic hopes to lead the charge and inspire the wrestling business to change in response to the ever evolving world outside. It is our goal that the Pan-Optic Championship be a first step towards this end.

The online announcement (you can watch its live reveal this Thursday 8pm EST on Chaotic’s Twitch) was met with an expected mixture of excited approval, intolerant disdain and warranted skepticism. With an increased spotlight placed on Chaotic for positioning themselves as leaders in inclusivity within the sport, we reached out to owner/wrestler/trainer Chase Del Monte to discuss the Pan-Optic Championship’s creation and its accompanying concerns.

POST Wrestling: Can you discuss the thought process behind the creation of the Pan-Optic Championship?

Chase Del Monte: Many of the women on our roster have expressed an interest in wrestling outside of a gender-specific women’s division. In early 2019, Davienne expressed an interest in leaving the women’s division (where she had previously been the longest-reigning women’s champion) so that she could wrestle a greater diversity of opponents. She went on to win the tag team championships with JT Dunn, and is now challenging for the Heavyweight Championship. Since then, other women on the roster have expressed that having a women’s title and women’s division felt like a constraint. They wanted to be able to wrestle anyone, irregardless of their gender.

With that in mind, our inaugural champion Becca has proven herself to be one of the hardest workers and fastest rising stars on the independent scene. She has trained with us at the New England Pro Wrestling Academy for nearly 2 years at this point, and has grown exponentially in that time. In training, she was consistently having great matches with male classmates, and it felt like a shame that if she was women’s champion, those matches would not have had the opportunity to be held in front of a crowd. The idea to change the title came about from a lot of collaborative discussions, with a lot of input and interest from Becca herself. She wanted to be able to face a wider variety of challengers, and as she is also a strong advocate of LGBTQ+ representation, she welcomed the opportunity to invite further representation of that community. Becca is the perfect person to lead this title and represent Chaotic as its first Pan-Optic Champion. 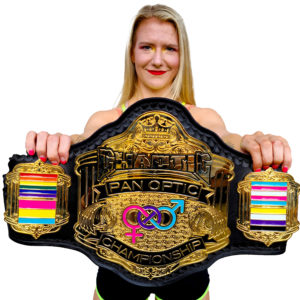 POST: It’s a great looking belt. Can you describe the specifics behind its design?

Del Monte: The belt design was a team effort, but the majority of the credit for its beautiful aesthetic belongs to WildKat Belts. The original design was sketched by one of our wrestlers Brad Cashew, who himself identifies as a member of the LGBTQ+ community and was familiar with the different flags and symbols. The original design we sent to WildKat belts was by all means a rough sketch, but they helped craft it into a brilliant finished product.

We reached out to Brad Cashew for further elaboration:

Brad Cashew: We included four flags on the side plates of the championship. The plates on the right represent different gender identities, specifically transgender and non-binary. The plates on the left are the pride flag and pansexual flag. The main plate of the belt shows linked gender symbols which has been used to represent gender fluidity. Because there is such a variety of different identities and symbols and flags to represent them, it was difficult to narrow down the list to just a small few. We intentionally chose symbols that we hoped would cast the widest net and represent as many identities as possible because it’s important to us that this belt is inclusive.

POST: How did you decide on the name, “Pan-Optic Championship”?

Del Monte: The name was probably the hardest part to decide on. I did a lot of brainstorming with Brad, and also sought the input of other LGBTQ+ roster members and students. We originally were leaning more towards “non-binary” as the name, but we didn’t want a title meant to be inclusive to have a negating term like “non” in it. The name “Pan-Optic” came 100% from Becca. It was unique and uncommon and perfectly captured our intention about inclusivity.

POST: What has the response to the announcement been like so far? Has the reaction surprised you?

Del Monte: Admittedly, I knew that it was going to be a polarizing move and that it would no doubt get some attention. However, I did not expect to see just how big it would be. From everything I’ve seen, it’s been an overwhelmingly positive response. There is, of course, going to be some negativity; it has come to be expected on social media. Irregardless, we have also received several messages from people, including fans in attendance that night who were so appreciative and moved by the title and what it means. That’s where I put my focus. To receive just one of those types of responses makes it worthwhile.

POST: Judging by responses on Twitter and Reddit, many have interpreted the announcement as the retirement of the women’s title while leaving men’s championships gender-exclusive. Care to clarify?

Del Monte: Yeah I have definitely seen that and that is 100% on me for not being clear; I guess I expected more people to follow the product, haha. Davienne has already been a Chaotic Tag Team Champion and has challenged for the Heavyweight Title as well. On our most recent season of Reloaded, Becca challenged Adam Booker for the New England Title, so I looked at those titles as non-gendered already. The Women’s Championship was the only title with any restrictions, whereas the others have always been open to all challengers.

POST: What makes this championship unique if all championships in the promotion are non-gender specific?

Del Monte: Representation is important. It’s easy to say that a title is non-gendered, it’s quite another to highlight that fact.

POST: What are the biggest obstacles preventing intergender wrestling from being more widely embraced by mainstream wrestling promotions and audiences?

Del Monte: I can’t really comment about the mainstream audiences, but I can offer what I have learned from our audiences and the way they have taken to intergender wrestling. My main take away has been that any story told right can be told. Years ago at a Chaotic Wrestling event, long time New England Veteran Alex Arion had one of the best matches I have seen with former TNA Star Roxxi, a.k.a. Nikki Roxx. The emotional story that unfolded during that match is a feeling that has stuck with me to this day. I believe that, given the two right people and the proper build, any match-up can be made, and that continues to be proven true. In my opinion, the two best singles matches that have happened this year in Chaotic were both intergender matches between JT Dunn and Davienne. And beyond that, their story is not an intergender story at its core. They were tag team partners whose team dissolved due to egos, and the two of them have proven to be the two best wrestlers in New England.

POST: Beyond this announcement, what other measures has Chaotic implemented within its promotion and training school since Speaking Out?

Del Monte: At both Chaotic and the New England Pro Wrestling Academy, we have implemented a zero tolerance policy regarding harassment, bullying, and hate speech. This policy is explicitly discussed with every new student who signs up at the school, and they are all required to sign a document agreeing to that policy. In addition to that, I keep an open dialogue with our roster and have an open door policy. The students and wrestlers on our roster know that they can come to me or any of the other trainers, as well as locker room leaders on the roster. We have so many wrestlers and students who personally live these values, so inclusivity has become the prevailing culture. Outsiders have complimented us on how welcoming it feels to be backstage or at our school, and we encourage anyone who is interested to come check us out and see for themselves.

Del Monte: In the end, part of the name and vision of this title is to create the opportunity to have these discussions. The role of gender in pro wrestling is an important subject and deserves attention. It could be easy to ignore it or simply continue on with the ways things have always been done, but that would mean turning a blind eye to reality. The truth is that our women want more opportunities to compete against a greater variety of opponents. We have wrestlers who identify as non-binary, genderfluid, and otherwise do not fit neatly into the idea of men’s and women’s divisions. Now we have a title that they feel represents them and celebrates their unique identities.

Chaotic Wrestling will be airing the Pan-Optic Championship’s official introduction and first-ever defence between champion Becca vs. Create-A-Pro’s Aaron Rourke this Thursday 8pm EST on their Twitch channel (twitch.tv/chaoticwrestling).