Tuesday’s episode featured the appearance of Bill Goldberg, who was briefly confronted by The Undertaker leading into Super Showdown, a #1 contender’s match between Carmella, Alexa Bliss, and Charlotte Flair for the SmackDown women’s title, Dolph Ziggler’s video packages, a 24/7 title switch, and “the wild card rule was in effect”.

This SummerSlam weekend in Toronto, join John & Wai at the Second City’s John Candy Box Theatre on August 11th, 2019 at 1 pm for a live Q&A and Meet & Greet. Tickets and information (including a $5 discount for patrons): https://www.postwrestling.com/live/

**Khabib Nurmagomedov vs. Dustin Poirier at UFC 242 in September and a unique clause in Nurmagomedov’s new UFC deal

On Moxley and his stance on Social Media. Wright Thompson who writes for ESPN, quit twitter in 2017 had this great quote https://www.google.com/amp/amp.awfulannouncing.com/espn/espns-wright-thompson-twitter-nothing-miss-will-never-ever-get-back.html 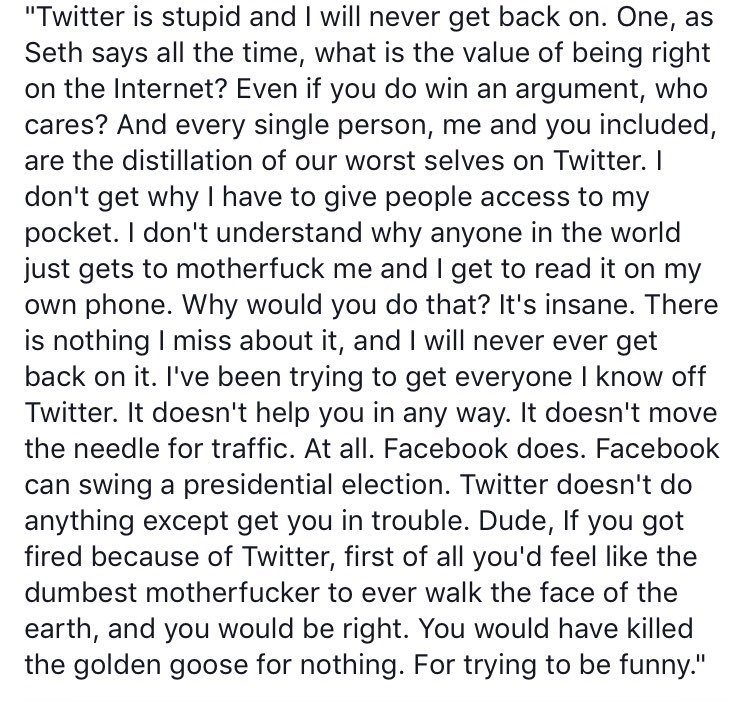 I hate Social Media nowadays more for the fact that people now use it as a tool for destroying someone’s career from something they said years ago or the very “Guilty until proven innocent” mentality it’s sunk into.

I don’t give a shit about some random person cursing me out or insulting me that I’ve never spoken to before. But I do give a fuck when it’s now becoming a platform to judge people in the court of public opinion and ruin people’s lives from pretty much nothing.

A Moment Of Bliss. A segment so bad they obviously have to have it on both shows now.

While I could see why a business would want to be on social media, for personal use social media to me is a huge waste of time. I currently only use Facebook and mostly just because I like keeping in touch with old friends and following events, businesses, and promotions. The “thrill” of getting likes on Facebook has really died down for me as I’ve gotten into my later 20’s, and I rarely post on it anymore. Most of my friends now just post wedding and baby pictures.

Give Owens back his win!
Goldberg and AJ are Georgia boys
And Roman is the obvious

I think Twitter was great in 2005 when it started but now it’s over crowded and there’s no moderation. You can basically insult anyone you want. Twitter is the rubbish bin of internet, no doubt.

Besides, what’s the point in having 30 million followers ? Are you actually going to read all of them ?