There are reports circulating that Miro is unhappy with his position in AEW. You never know if its true, but you have to think that with all the talent AEW was bringing in, this was bound to happen as not everybody can be in a prime spot all the time.

AEW star Miro (fka WWE's Rusev) has seemingly agreed with a suggestion that he 'had it better' in WWE than in AEW. 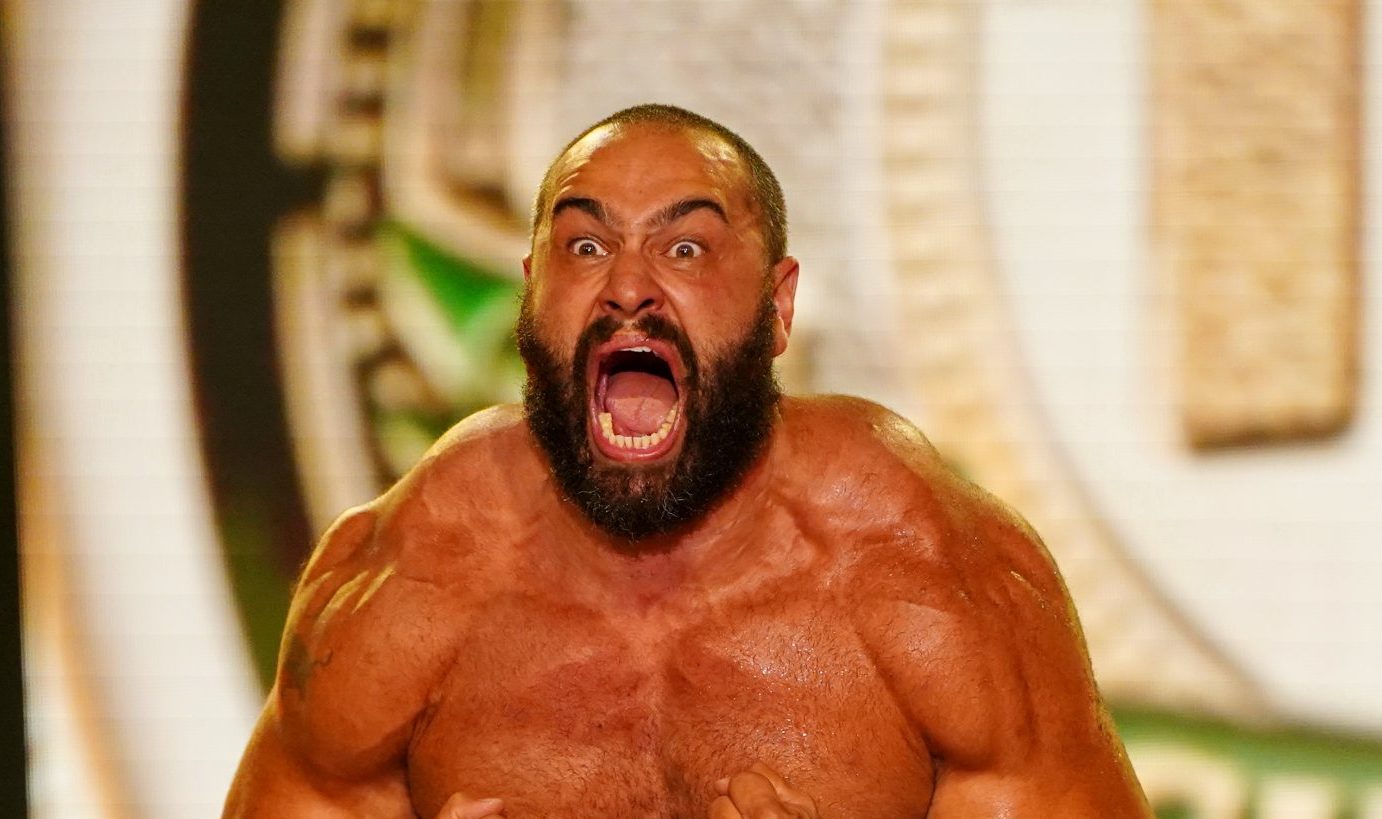 Miro Seemingly Unhappy With His Position In AEW - Wrestling Inc.

If his social media activity is anything to go off of, Miro seems to be unhappy with his presentation in AEW.

I don’t buy any of this. He literally just signed a new deal several months ago. Nearly nothing has changed in that time.

A lot of the “Newz” sites have been working overtime to throw out anti-AEW stories over the last week or so. It’s clearly tied to people being excited for the Triple H lead WWE news, and reinvigorated interest surrounding that.

The same sites and sources are pumping out stuff trying to come up with stories stating AEW isn’t getting a rights increase (even though nothing has been stated about any of Warner Media’s sports properties).

The same places are amplifying voices losing their minds over Mox working Mance Warner on TV.

It feels like Miro was having fun with fans with his social media posts. And everybody read way too deep into it.

It may be true, it may not be true, I can’t say for for sure either way. Regardless, I think it warrants discussion.

When you like a tweet that says you were better off in WWE, you kind of ask for this kind of attention, and going back to his WWE days Miro has been known to voice his frustrations through social media.

Time will tell, but I never really thought of wrestlinginc.com as a “newz” site. Do they have a history of reporting incorrect information?

As for the AEW right’s fee’s story, the only story I have read that touches on that is Johns, and I dont buy for a second John is trying to push some anti AEW narrative.

Both of these articles reference a single liked tweet and that’s it. I feel like this is making a mountain out of a mole hill so to speak.

Maybe, but at the end of the day I think it’s worth discussion. I don’t think AEW should be off limits when it comes to topics of this kind. When Sasha Banks did something similar a few years back, people had no issue discussing it. When Kevin Owens posted the Mount Rushmore tweet, nobody had an issue.

In my second line I flat out said, “you never know if it’s true”, but regardless, when an AEW star likes a tweet saying they were better off in WWE, it’s going to become news.

No mountain here, just something noteworthy to discuss.

Regardless of whether it is factual or not right now, this is another story about talent feeling unappreciated or underutilized. Brian Cage and Johnathan Gresham have both been public with their thoughts. Now, arguably both of those talents don’t have the profile a Miro does and they can be a little hard to book since they’re both a little dry (IMO).

Miro has had some start and stop and this current program he’s in is a little confusing. It seems like it’s leading to a 6-person tag, but to what end?

Time will tell, but I never really thought of wrestlinginc.com as a “newz” site. Do they have a history of reporting incorrect information?

They are a site that uses clickbait headlines with news that’s taken from multiple other sources. They are 100% “Newz”.

I can’t take this seriously yet. Has to be more than a liked tweet for me.

But it’s not a stretch to think higher level talent in AEW will want out bc they aren’t getting the push they think they deserve. I’m an AEW fan but I still think this is exactly what we want in a healthy wrestling industry.

I can see some of the frustration.

Who the hell is Mance Warner and why is he in a title eliminator?

It’s very obvious – Tony isn’t some genius I’m realizing. All he wants to do is book Mox to boost those ratings and give him some loser he can beat up on that nobody gives a fuck about. In general it’ll be the same thing they do with everyone else like Takeshita etc. where they will give them a lot but in the end he will lose. And it doesn’t matter if you beat this guy because nobody knows who he is, and most all you will do is make him into a bigger star by losing to Mox.

It’s the same thing they did with Darby Allin, Takeshita, wheeler Yuta. If you have some guy nobody thinks that can win who is competitive you get them over, and you get your big star on TV. He views this is a win-win so he keeps doing it over and over again.

Don’t want to feed Miro or Andrade to Mox on Rampage . I get it.

It’s a pitfall of having rankings/standings. You have to adhere to them or they carry about as much weight as the Smackdown Top 10.

I think some people are looking wayyyyy too deeply at the Mancer match.

Guys, it’s no different than a modern version of Hulk Hogan wrestling on WWF Superstars. Instead of a no name jobber squash, they’re using guys out there who people know of, but aren’t in the mix, to have non-Title, TV filling, matches.

I remember back when Bret was champion, his whole things was being a “Fighting Champion”, so he’d word literally everybody on every TV. Virgil, Fatu, Papa Shango, etc.

In this day and age, they can’t throw Mancer or somebody else on TV with a phony name of whatever for a squash - so they give them a little reasoning to justify things.

If they were giving Mox modern jobber matches with fake names, people would complain even more.

AEW cannot seem to win with a very vocal group of fans.

Also, at this point, it’s very clear that AEW and WWE produce TV very differently. WWE is always all hands on deck every show, showing specific faces for good or for bad. AEW cycles people through, and generally allows their top talent to have incredibly memorable big matches several times a year, while letting them have some down time in between.

There seems to be a very large disconnect between fans who see “Not on TV or in a story every week” = “not using somebody properly”.

Miro is a guy who can main event whenever they want him to. In the meanwhile, he’s had some awesome stuff in his time. The Arcade gimmick street fight, the TNT title reign, the Danielson match, the Kingston match, etc. There is no reason to believe he won’t have many more moments in the years to come.

Warner and mox had a better mstch than miro and mox would ever have had. Hard truth.

To be fair, you can say this about the majority of major news outlets as well. While I 100% agree that’s annoying, ultimately what I care about is if their stories are made up, or if they have substance.

And in fairness, you often post random tweets when adding to conversations here (which is fine), so I don’t think posting an actual article should be off limits because a site uses headlines for clicks. It was reported my numerous outlets, I just posted 2.

Guys, it’s no different than a modern version of Hulk Hogan wrestling on WWF Superstars. Instead of a no name jobber squash, they’re using guys out there who people know of, but aren’t in the mix, to have non-Title, TV filling, matches

Ecw would do this and I always thought it was cool.

Raven vs Gordy or Dr death out of nowhere. Maybe they weren’t for the title but that’s what I remember.

Guys, it’s no different than a modern version of Hulk Hogan wrestling on WWF Superstars. Instead of a no name jobber squash, they’re using guys out there who people know of, but aren’t in the mix, to have non-Title, TV filling, matches.

That is perfectly fine, but giving some loser like Mance Warner a “title eliminator” match, because he won some shitty battle royal that no one saw, is pretty fucking dumb. I love AEW as much as you do, but there is no defending that. It is fucking stupid. I can buy Rush getting a shot. It is still a stretch, but at least they said he’s won his last 10 matches outside of AEW, or whatever it was.

As for Miro being unhappy, it is perfectly understandable why he would be. I dont know what they are doing what this guy. I love the promo videos he does and I think those alone are better than anything he did in WWE outside of is original run with Lana. I loved “Rusev Day”, but it was beneath him. There is no excuse to see guys like Matt Sydal, Lee Moriarty, Butcher & The Blade among others, as much as we do and not get any Miro matches.

I am all for cycling guys in and out and not having people on every week, but he needs to be in matches way more.

And in fairness, you often post random tweets when adding to conversations here (which is fine), so I don’t think posting an actual article should be off limits because a site uses headlines for clicks. It was reported my numerous outlets, I just posted 2.

I think it’s fine to post but it’s just such a leap to assume he’s disgruntled from one like. Miro being upset is certainly possible but wwe sucked at pushing him as well. Idk.

I do think it’s a worthy discussion bc it will happen more and more.

The problem is this is a title eliminator. This isn’t a squash match that they’re booking - a title is involved. They’re actually saying this loser that I’ve never heard of this somehow in the title eliminator.

It don’t even know who Rush was and he got a shot. It doesn’t make sense.

I mean they do a lot of dumb shit too. They had a battle royal to determine an intern champion and a lot of their top guys didn’t even enter it. How that make any sense?

Tony Khan is more coherent Nd competent Booker Ryan Vince McMahon at this stage. However I don’t think he’s as good as Triple H was when he was booking NXT. He makes a lot of mistakes and does a lot of dumb shit like this too. It’ll be interesting to see what the next little while brings

To me they are fresh matches. Mance Warner is awesome and I’m a fan of these random matches where the AEW star goes over instead of a million rematches and fuck finishes.

That being said, I understand why guys like Miro and Andrade would want out. There aren’t any real long term plans with either guy it seems.

My attitude is if someone wants out, let them leave. Whether it’s AEW or WWE.

This is the best time to be a wrestling fan in a long long time.

To me they are fresh matches. Mance Warner is awesome and I’m a fan of these random matches where the AEW star goes over instead of a million rematches and fuck finishes.

You can have the match, you dont need to make it a title eliminator match. There is no world in which Mance Warner should be even close to an AEW World Title shot. He is fucking terrible and even if you like the guy, there are far better people than him to put in that spot.