REPORT: Samoa Joe returning to WWE with role at NXT

I have no idea if AEW had any interest in him out of the ring, and I assume that other companies would likely require him to travel. If he was cleared to wrestle, then I could see your point, but if he’s done, I could see NXT being perfect. I really do get the impression that the NXT culture is completely different then the culture on the main roster.

Yeah and lets play this out further - so even under the hypothetical that he can wrestle again - the idea that he was in a bad place in WWE pecking order as one is solely based on him being released. He was constantly in the upper middle card to main, got a Brock match (which only go to a select few), got AJ for the title at Summerslam, destroyed Mysterio for the IC belt at WM35 and was about to be heavily involved in a major feud with Owens/Rollins in 2020 before he got hurt. And that’s the thing…Joe’s been injured a lot in a short time up there. Got hurt after the Brock matches. Got hurt in the midst of a Reigns feud that lost WM34 for him. Got the concussions that ruined WM36 for him. That’s really the only reason his run wasn’t successful. There’s more than a decent chance he would have been champion by now once had he stayed healthy the entire time.

Now what we expect him to do if not signing? Wait a year to be able to go to NJPW? Look backwards and do ROH or Impact again (assuming he even likes either company anymore)? Take his chance on an Indies that might take a year to get back to previous levels of activity (and currently can’t afford the asking price of a guy who was WWE champion within the last 12 months)? Be yet another returning from injury ex-WWE star trying to break through an over-packed AEW mid card crowd? What makes Joe different than Christian?

This isn’t just a safer situation for him; this is just as good of a situation as any else. The chances he’s making himself a bigger name or doing “more for his brand” if he leaves is very arguable. Is the 2022 G1 getting him there? Can he go on a Drew Galloway indy run in an international business that is somewhat in economic and stature ruins right now? (I’d even argue he’s well above where McIntyre finished off at) Does being the big fish in ROH or Impact do anything at all for his brand that people don’t already feel?

So it comes down to “Will AEW make him Moxley?” Because otherwise this hypothetical bar for Joe the bigger branded IP star is either really just "I want to see him in AEW [or another specific place], or believing he’d become a big movie star outside of WWE.

And it’s fine if that’s what people want…but…lets just be realistic about it.

If he went and proved to be a draw and a merch mover and WWE saw that he’d get a bigger check to come back. If he can’t be those things. I’m sure he’s comfortable.
The argument seems to be he has nowhere to go and prove he’s a draw so he should just go back to NXT. Maybe Joe was just never a draw at all. Not a bad thing but perhaps the actual answer

Edit: if this guy is successful and I hope he is. Will WWE offer him a bigger deal to come back? 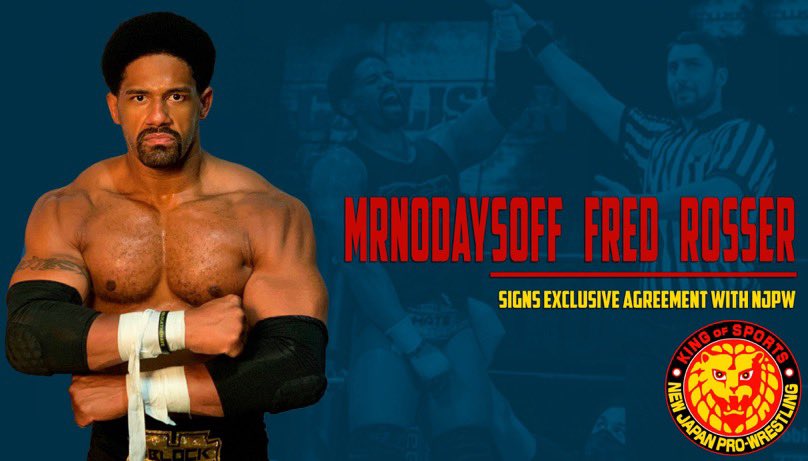 @realfredrosser
I’m excited to officially announce I’ve signed W/ NJPW! All I can say moving forward is, don’t ever let your dreams just be dreams because as long as you’re patient & believe in your dreams, anything is possible. Patience is a talent #njpwSTRONG #blockthehate @njpw1972 @njpwworld
B_From_NY June 14, 2021, 10:30pm #23

If you’re asking me if Joe is a Draw and could be a Draw elsewhere…the answer is probably no. But I don’t think that’s a negative on him. Proven draws that exist today in America are maybe a handful or two. If that’s requisite to him successfully going elsewhere, I’m going to say that’s its a flawed expectation for him to have.

Could he make good art? Could he win belts? Could he make a good living? Sure. My only point here is the differentiation of where he should go to properly do these things isn’t unique to leaving. And that’s where my problem with “he made a good decision, he made a bad decision” arguments comes from; because it’s really just “Did he go my preferred route?”

Joe has been successful at every turn and NXT/WWE wasn’t an exception. And if he was healthy that probably wouldn’t have changed. But anything he can achieve outside WWE is possible within (other than some undetermined-level-profitability hobbies) and fans acting like he’s “made a mistake*” (more of a Twitter thing than a here thing, really) is what drew my focus.

*the idea of security is one exception, until we know the endgame of these layoffs, I can’t argue against other than to say there’s probably no perfect answer for that need in this industry

I agree with the above. Well written @B_From_NY

I’d elaborate on what my initial thinking was which is:
If he can get a few top seller T on PWTs
Have some critically acclaimed matches elsewhere
Be part of a big show that sells a live gate (New Japan of America or whatever)…
…then I would think WWE would be aggressively wanting him back. Sellers remorse kicks in, and you see he has further upside value.

That’s different from him viably being able to do those things in the current landscape as well as wanting to. I am super happy Joe keeps getting paid and he has been terrific everywhere I’ve followed him since 2006. Big fan of his and whatever makes the dude happy.

It’s all person by person but I think we’ve seen proven people can go be super successful on the open market and the demand for them may increase as WWE keeps trying to stay in the conversation which they seem to be keen on.

I get it, but this is like the difference in asking me if the Giants had released Eli Manning and Geno Smith in 2018, could they both go elsewhere and come back at a higher level to a better deal with the Giants in the future. There’s a level of improvement you can hope for with a guy on a minimum deal; there’s far less to hope for when they’re already in the top-5% in their industry.

See above but nobody could have helped Geno Smith

Team sport big difference but I digress.
I really popped for a Geno Smith reference

Also I’m talking pure money. Idk what Joe will get paid. I wanna see him get paid and paid and paid. All timer after he officiated GrapplKingdom

As tristate people I knew this would be the connective tissue that brought us back together.

I am wondering if they terminated his active performer contract, due to cost; and renegotiated a non wrestling contract.

Good for him. I’m sure he’s thinking about his and his family’s future. Bummer for many of us who would have liked to have seen him have a go elsewhere. Sadly, he probably isn’t a shell of the Joe of 10 years ago (or let’s face it, even 5 years ago), and would struggle to consistently deliver week in and week out with the kids of today, injury prone as he is. Stoked for the kids in NXT who will gain invaluably from picking Joe’s brain.

Ya I hear ya, the reality though is none of us know at this time what his role will be, what he wanted his role to be, what he will be paid, and what if any security does he have (ie. guaranteed contract vs he can be cut at any time). Without knowing the answers to these questions, we have no idea if he’s in a shittier position. I feel its a coin flip.

I think we can determine two things to likely be true

If this is the case, I just hope that he got a massive payout for sustaining a career-ending injury while filming a WWE commercial spot and doing a stunt.

Did Joe do any interviews post release? Maybe it was in the works all along.

No, he remained silent as far as I know.

The biggest strike against this whole theory that it was an arranged plan all along… Why publicly announce his release? Couldn’t they have privately come to a deal, and just come to a new agreement?

Its possible as well that if hes now an “employee” opposed to a “contractor”, while he may be paid less, there could be some added security. Who knows.

How was he hurt? I actually never heard this story, or I did and forgot.

The story is that he was injured filming a promotional commercial for WWE, and doing a stunt. In this case, a table break. Something that without a doubt would have been avoidable.

Here is the commercial… around 20 seconds in is the bump. 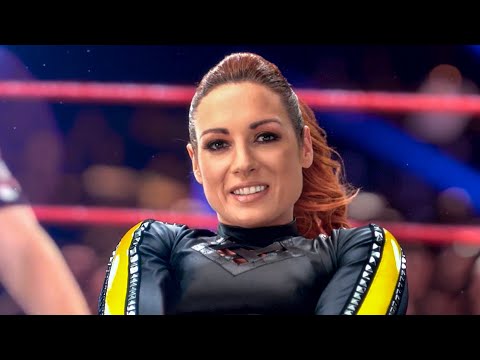 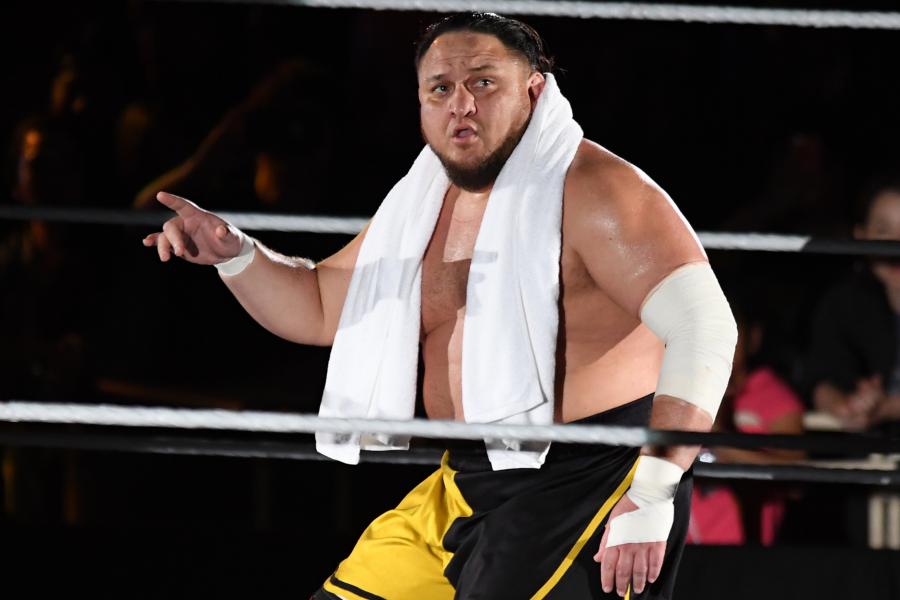 WWE Superstar Samoa Joe reportedly suffered an injury during a commercial shoot last week and is currently not cleared to wrestle...

His career was effectively ended by taking a powerbomb through a real table, in a highly stylized commercial where a real table wasn’t even needed.

I’m more curious if he went anywhere else to get cleared and couldn’t.

Thanks for posting, I wasnt aware of that.