Dave Meltzer noted that Canyon Ceman is still with WWE.

Senior Vice President of Talent Development Canyon Ceman along with producer Sonjay Dutt are no longer with WWE.

F4WOnline’s Dave Meltzer reported the news of Canyon departure. As of this writing, there are no additional details about why Canyon is out of WWE but over the past several months, WWE has been making cuts ranging from talent to various departments such as their media, production and talent relations branches.

Canyon joined WWE as an executive in 2012. Prior to that, he was the Chief Financial Officer of the Association of Volleyball Professionals.

In addition to Canyon’s departure, Sonjay Dutt is no longer with WWE as a producer, as reported by Fightful Select. The site noted that Sonjay left on his own terms.

Dutt had been with WWE since 2019. Dave Meltzer added that he left the company two weeks ago. Dutt is 39-years-old and his last match was in December of 2017.

Definitely would love to see Sonjay get back to wrestling, as he’s definitely deserving of one last run in ring, and still has a lot to offer.

Meltzer now reporting on Twitter than Canyon is indeed still with the company. “Crazy story,” he noted. 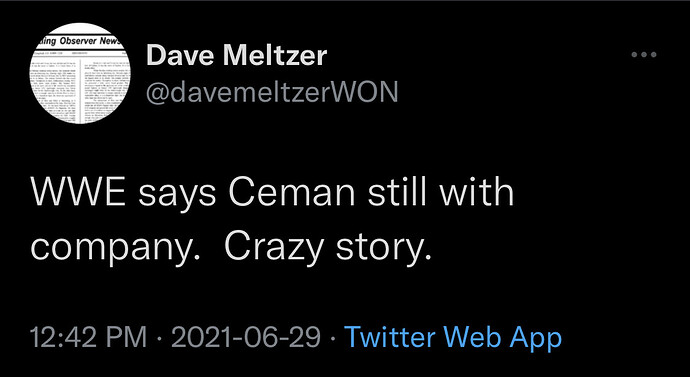 Meltzer should update his story on the site then. It hasn’t been edited yet.

So was he cut and brought back? Or did Dave report incorrect information?

Probably incorrect info. Sean Ross Sapp just tweeted that WWE reached out and stated Ceman has not been let go. There have apparently been rumors circulating within WWE and beyond the last two days.

Okay, now the Observer story has been updated by Josh Nason, apologizing for the incorrect reporting.

I’ve read that sometimes big companies will leak false rumors to certain employees they suspect could be leaks. So if the story gets out, they know where it came from. I wonder if Dave just indirectly gave up one of his sources.

PWInsider said Dutt was backstage at Dynamite tonight, so he may have already gotten a new job.