Cassidy Haynes broke the Danielson to AEW story so he’s been legit in the past. Huge news if true. Sean Ross Sap is also confirming that he’s heard the rumours, but can’t confirm if true or not

Please put “REPORT:” before the headline because it’s not official yet.

One also has to wonder what this would mean for talents like Sami who aren’t even allowed to enter Saudi Arabia because of political reasons. And what about the direction of the woman’s division? And what are the terms of the deal? Is Vince back in charge? Does HHH still stay as CCO?

If the WWE is sold to the Saudis then it’s off the menu for good for me. I just can’t support that. 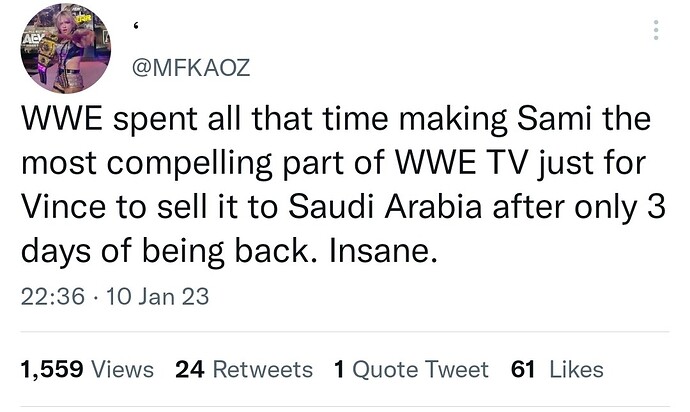 IF this is true (and that’s a big IF) then this is a huge international news story. The kind of story that would be broke by the WSJ just like they did that Vince was coming back. Not by the guy who happens to guess where Danhausen was going to appear next.

I’m waiting for a lot more solid confirmation. Hopefully this is just rumor run rampant. Otherwise this is literally the worst case scenario. 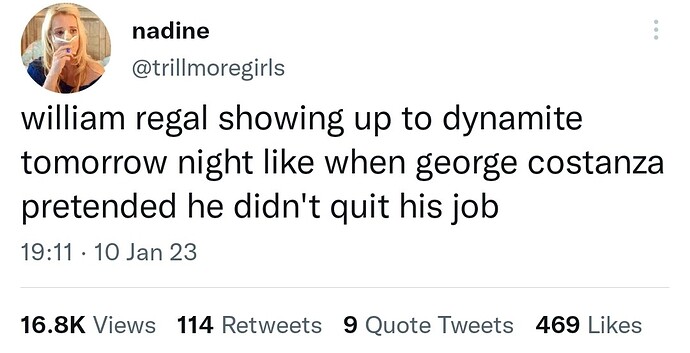 Like if you were you ask me what the worst case scenario for the WWE would have been a week ago, I would have said “the Saudis buy it and put Vince in charge.”

Major media companies need to now treat WWE like Liv Golf. Let Vince go play in his Saudi playground and ignore him. I hope most wrestling fans do the same

I wonder if this means Rock doesn’t do WM now?

IF the news is true then this is a possibility. All the talk about the next TV deals could be all for naught if the major cable networks don’t want to make a deal with with them and so WWE gets relegated to some tiny channels or become a strictly streaming product.

But that is still awful for Pro Wrestling as an industry. I know a lot want the death of WWE. But it would lead to the end of thousands of jobs and an entertainment institution. Fans won’t just jump to AEW either. Most will just stop watching entirely.

I’m not so sure - wrestling fans don’t care about politics. Most will watch as long as it’s on TV. They cheered Vince and haven’t left with all the SA ties. I’m sure they will just remove Sami from TV quietly and life will go on.

I was trying to say that Comcast and Fox may not want to air WWE in the future if it’s owned by Saudi. So if WWE is stuck going to some tiny cable network and Monday Night Raw isn’t on USA then they would lose a massive piece of their audience.

I dont think all the fans will stop watching, but I can see ratings taking a huge hit, say 25%. Definitely all the fans that came back once Hunter took over.

I think where this will hurt more is the TV deals. I just can’t see NBC Universal (a company that in general seems to be on the left) wanting to be partnered with the Saudi Investment Fund. This is why I am hoping that this Saudi angle is just Vince’s way of driving up the price and using all the fans that hate WWE to put this out there, if true, its working.

I can definitely see Raw and SD becoming a streaming product only in the US. Vince doesn’t care as long as the Saudi’s pay him. Bad for the industry but what’s the industry worth if it’s built on the back of a 80-year-old sex pest

I think it’s Vince’s final FU to everyone. He comes back and sells to his friends in SA and remains in charge. Company is private again and he can abuse at will and cover it up. So what if he goes to smaller networks or streaming - he still got his way in the end and the hardcores will follow him

Honestly that’s all he cares about. The show has been for his own amusement for decades. But now there is zero accountability. What a shit show lol

Don’t they own Newcastle? There is a precedence for this kind of stuff, so maybe they will be hands off and let Vince do what he wants.

Exactly! So many fans are happy about this potentially happening because they believe this will be good for AEW and bad for WWE, when it reality this is going to be the worst thing to happen to the industry since WWF bought WCW. Its loose loose win. Fans loose, performers loose, Vince wins. I don’t understand how anyone can be happy about this unless you are pulling for Vince.

I mean, potentially huge injection of cash, could allow the WWE to bolster their roster and pay people more so it could be a good thing in that regard