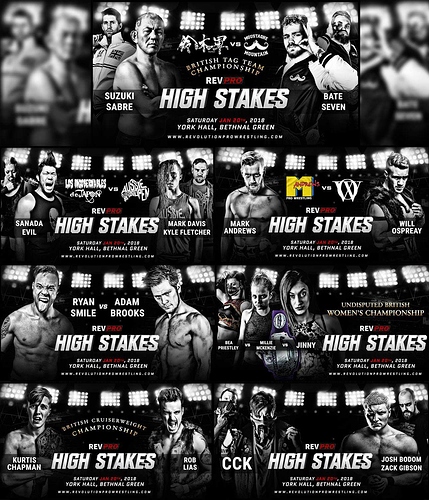 Maybe not as stacked as past versions of High Stakes, but to me, it’s a lot more interesting, and a lot more reflective of what Rev Pro do year-round.

Mark Andrews V Will Ospreay should be spectacular as always. I’m assuming they will continue to build ZSJ V Trent for the title later in the year.

Adam Brooks has a lot of hype and looking forward to his match with Smile.

This looks fantastic! Aussie Open are going to blow up this year, I’ve really enjoyed seeing their progression at FCP shows, they’re so great.

Agreed! LIJ vs Aussie Open should be awesome. Keen to get a live look at Adam Brooks as well.

New Japan vs. WWE in that main event! That alone makes this show worth seeing.

Good show, Will vs Mark Andrews and the main event tag of Suzuki and Sabre Jr vs Tyler Bate and Trent Seven were both great.

Plus I got to see Suzuki do this to some idiot in the crowd at the end (seriously, Suzuki is the last person in the world you want to aim a stupid chant at)

We talk the big matches on this on the British Wrestling Experience dropping tomorrow.

Any NJPW World subscribers can watch the Aussie Open vs LIJ tag now. Not sure if/when the other matches are going up (perhaps they read this forum)…

Yeah, Rev Pro has some great shows. I’ve been to several of their shows and I’ve enjoyed every minute.
If you get a chance you should totally give them a watch as I think they’re one of the best wrestling companies in the world.

How fucking good are Aussie Open? God damn, stick them in a 2/3 falls with CCK or Moustache Mountain and I doubt I’ll watch any wrestling ever again.

Plus, Mark Davis is a big fan of Run The Jewels so, y’know, uber mega love from me.