This week only: Patrons receive $7 off The Rocky Maivia Picture Show tee

On Dynamite: Thunder Rosa and Dr. Britt Baker headlined the show in the first-ever Lights Out Unsanctioned Match on Dynamite, The Pinnacle is born, Christian Cage explains his reasoning for coming to AEW, Jon Moxley and Eddie Kingston team against The Good Brothers, the cracks continue to deepen with Kenny Omega and The Young Bucks, and Cody Rhodes squares off with Penta El Zero Miedo on the St. Patrick’s Day Slam edition of the program.

Watch the video version of this podcast at YouTube.com/POSTwrestling

Double Double+ patrons get live Zoom access to all of our POST Shows after ever Raw, Dynamite, SmackDown and WWE/AEW PPV. Join at postwrestlingcafe.com

People need to stop talking shit about the AEW women’s division. That lights out match was incredible and gave us something WWE/NXT would never - a violent bloody women’s brawl. Loved it.

That match and the money promo by MJF really made Dynamite feel special.

That eight man was pretty sloppy though and personally I’d have put Penta and Baker over. Enjoyable show though

I mean overall their division still isn’t great or well booked but they are getting better.

Damn maybe AEW should leave the garbage deathmatch bullshit to the ladies. At least they know how to pay off such a stupid gimmick in a way that is brutal but makes some sense (no barbed wire baseball bats). Kudos to Britt and Rosa.

Pretty good opening match but what a terrible finish. The Crossroads is buried. The arm snap is buried. And Penta loses on a fucking surprise roll up. They should have gave Penta the win in my opinion, and if you are going to beat him, just hit him with your finisher and pin the guy. Having him do the arm snap and Cody just completely no-sells it and uses the “injured” arm to pull the guy down for a roll up… terrible.

These two pulled off one hell of a match, hopefully this can be the spring board that the division needs. In this context, one good match only means as much as the follow-up. If they follow this up with garbage in the division, the division will still be viewed negatively, hopefully they take this new found excitement and run with it. Based on the last year, I’m not confident.

Totally agree on the finish of the Cody match, and hated the vertebreaker kick out.

I hope we build to an I Quit match where Penta goes over. Maybe have Arn throw in the towel to build more tension

Agree very strongly with Penta needing the W in that match. Cody’s had plenty of convincing singles victories, Penta not so much. All I could think watching the end of that match was that Tony selected the “Make both guys look strong” option in EWR, but that made Penta look weaker imo.

And yes, main event made the show. Loved it. Thunder Rosa is so damn likable. Hopefully a rivalry that goes on pause to be resumed when one of them has the title.

Upon listening to the show…

THIS is why they pulled Dark Elevation off YouTube. By anyone’s estimation this is far more embarrassing, deplorable, and offensive than a man covered in blood posing in the ring with a 9 year old. I’m sure most of you have seen this already but if not… oh boy. Sorry for the bad quality but this is one of the only videos up on YouTube. Tony “Streisand Effect” Khan seems to be at it again trying to scrub their screw ups from the internet.

When l was about 12 years old myself, there was an HBK kick on someone that l thought killed the guy the sound was so loud and someone pointed out the thigh slap.

So then at a Christmas party, l pulled my sister to the side and said let’s prank all the adults, and to go down when l pretended to superkick her. I slapped the thigh, she flew backwards onto the couch and EVERY adult ran over like they were about to throw me through a window for kicking my sister so hard that it sounded like a gunshot, until she popped up fine.

That can’t be the reason. You are telling me they were more worried about that botch than these?

It's almost as if @JackEvans711 is intentionally botching his moves every time he appears on @aew #AEW https://t.co/1UHEWYnyPf

WWE are the last ones who need to be thinking about banning thigh slaps.

Here is a better quality version of the incident you are referring to.

To be fair the last one is far worse than the others because it stopped the whole match. Much easier to buy a guy missing moves in a match then 2 guys just stopping in the middle of a fight looking confused.

Ya I’m with Breng on this one. That Lucha/Cezar “botch” was almost toeing the line between what is a botch and what is just an amateur exhibition that should only be taking place in a training facility. Best comparison I’ve seen is if a trained actor on Broadway stopped mid-play and said “what’s my next line?”

Perhaps the most inexcusable thing about these clips is that they were pre-tapes. Which means either nobody bothered to watch this shit back before uploading to the internet, or someone with power said “oh ya, that’s fine, go with it.” Not sure which is worse. Regardless, this is the sort of thing that could easily be edited out and has no business airing. 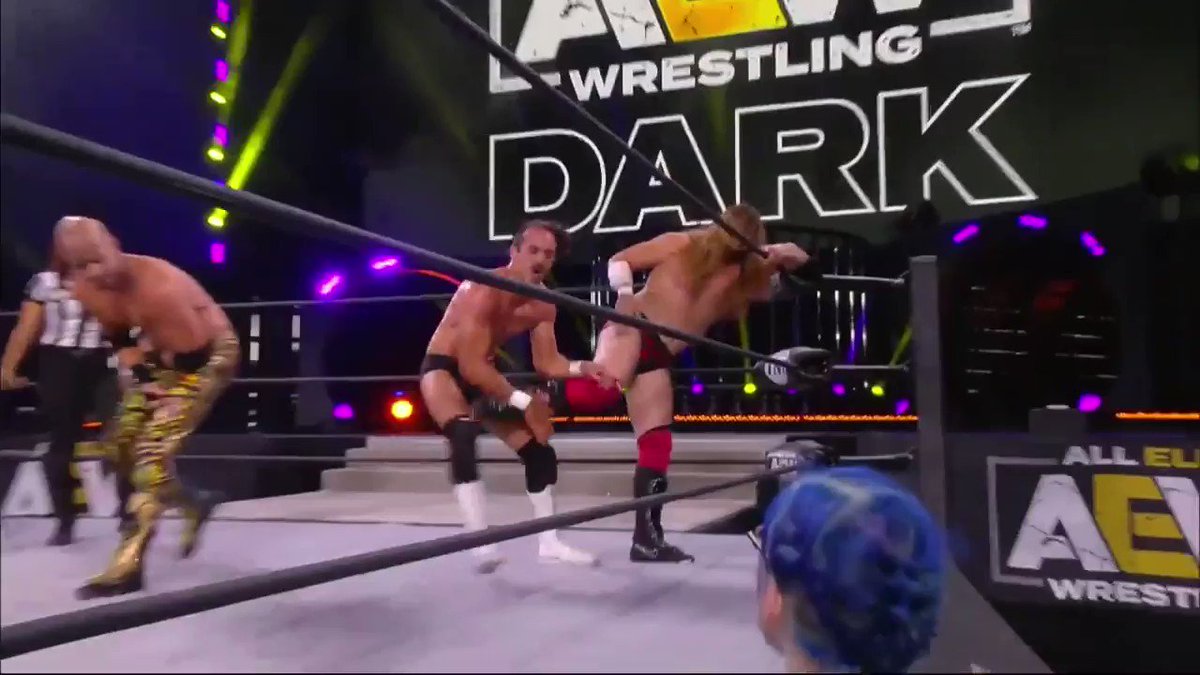 I might have to start watching Dynamite and Dark based on the sheer volume of botches as I need a laugh.

The first one is why the modern product is utter shit. It’s painful watching these amateurs embarrass themselves and the business obviously cooperating by just standing crouched over (one actually adjusts himself towards the corner whilst crouched over) for what seems like eternity awaiting that idiot. The fact that after sacrificing any self-respect Nutella botches his “spot” makes it hilarious.

Can you please start watching Dynamite and Dark? It would help with the 50+ demo.

I’m not aware of WWE programming containing the same number of botches/poor execution other than the occasional Nia Jax moments. Either their employees are better trained and ready for national TV or they at least edit their botches out.

As so far as the obvious cooperation “spots”, yes, I have called it out for years as ruining pro-wrestling with WWE being as guilty as any other promotion.

Do you not think these incidents being broadcast, whether on national cable or YouTube, make AEW look amateurish?

Do you not think these incidents being broadcast, whether on national cable or YouTube, make AEW look amateurish?

I don’t think people care about most of these botches unless they specially look for it.

They’re fun “gotcha” moments for nerds like us to point out, but to me, they have little relevance to my overall enjoyment of the product.

And if you’re looking for things that make a company look amateurish, I think a poorly conceived and executed backstage promo/skit/interview does a lot more damage than a blown spot.

Of course not because that poster, despite detesting everything about AEW, watches every second of the product and writes essays about every angle.

I’m an AEW fan and even I don’t usually watch Dark but he examines every move. Clearly one of the biggest AEW marks out there.

In much the same way as you can instantly spot a Fox News viewer by the regurgitated soundbites/nicknames/talking points, Cornette listeners are not shy about laundering his “witty” nicknames and talking points to let you know what you’re dealing with.