Listen to our WandaVision review for free

This was insane, AJ Styles is still one of the very best. #WWERaw https://t.co/44r7DcejtO

Wow… that’s something else.

Related question, now that I’ve seen that and the Randy Orton promo, am I good with catching up on Raw for the week?

Full disclosure I haven’t watched RAW in maybe a year but I keep up via PODS etc. Wondering if this episode like Battlefield Earth? So bad it’s actually worth watching?

Between whatever the hell is going on with Orton, Wyatt and Bliss to AJ and Ricochet talking about 50 first dates - I’d say absolutely.

Because AJ has selective amnesia like Drew Barrymores character in 50 first dates. You know, because he was embarrassed at TLC and now doesn’t remember it.

Such a sick burn by Rick O Shea

The storyline with alexa is really bad but she does play her role really well. You could have this Harley Quinn Gothic Lolita type of character in a more realistic light (without the fiend) and with a better story.

I’ll watch it tonight after finishing the podcast and let you know. I only caught snippets of it due to the Leafs game last night, but seeing the Orton’s ‘mask’ I figured it would be a very special show. 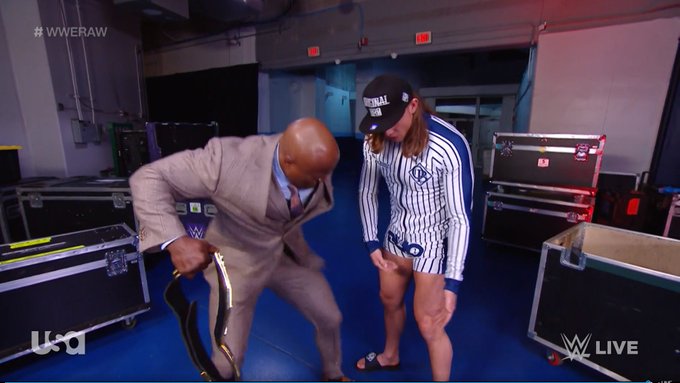 I managed to get the show in under about 2 hours, and I felt more bored watching it than anything else. This may be because I am so used to the show being written for an out of touch old man that there isn’t much of a bar anymore.

Her role doesn’t fit in on a wrestling show though. They can’t tell logical stories period, so adding this type of complexity is a bad idea.