John Pollock and Wai Ting start off this week’s show with an important discussion with POST’s Andrew Thompson & Nate Milton on the murder of George Floyd and the outcry over the past week.

Then, we move onto a discussion of Monday’s edition of Raw from the Performance Center featuring an update from Rey Mysterio and a message to Seth Rollins, Asuka takes on Charlotte Flair, The Street Profits and Viking Raiders go bowling, the editing of Kairi Sane’s injury during her match with Nia Jax, Apollo Crews defends the United States title and TikTok – Rob Gronkowski’s 24/7 title reign is counting down.

Thanks for this guys. Great and necessary discussion to open the pod.

I don’t know what to say. It’s late and my weekly Rewing-A-Raw listening left me feeling…I don’t know.

Thank you. Brother Thompson and Brother Milton are powerful and as a young Black man they’re two brothers that I look at as people I’d like to be. They’re powerful and I really appreciate giving them a platform to talk about everything going on. Ting and Pollock have always hit me different in terms of how they discuss social issues but during this time it further cements why I’ve listened to you for years and have been hooked. You’re great people.

In a lot of spaces I occupy (Esports, gaming, wrestling) I don’t feel totally comfortable. Pollock, Ting and the whole Post Wrestling crew makes me feel like, yeah, there’s some homies in this community that are looking out for me and amplifying the necessary voices.

Brother Thompson talking about having to have the “talk” definitely resonated with me. I’ve had to deal with that. I remember my mom not letting me go certain places alone or getting mad at me for going out without picking my hair. I didn’t get why when I was 10 but it dawned on me as I got older. It hurts knowing more than likely I’ll have to give my child that talk one day.

Anyway, thank you for having this discussion. Idk what else to say. Just means a lot to a young brother.

What a world we live in when Wai has to almost apologise for starting a podcast with the biggest story in the world right now rather than talking about whatever happened on Raw.
Hope everyone listened and hope others get to hear the discussion who have no interest in wrestling.
Get this heard people,put it on your social media accounts.
Thank you all 4 of you.

Thanks so much for this episode. Andrew Thompson and Nate Milton were great to listen to on the subject of the situation around racism going on here in America. Episodes like this are why I listen to Post even when my wrestling interest wains.

Thank you for this conversation. Andrew, Nate, Wai, John; thank you.

For further listening can I recommend The latest Kings of sport podcast with Brother Nate discussing racism.

Just a precision : Billie Kay’s boot has always been called Shades of Kay. It was her finisher in NXT.

This past week has made me really understand what ‘black lives matter’ means and as a white male I can admit that I didn’t pay much attention to it before. But this week has made me start to think about how I can help change things. I don’t live in a major city where I can join in on protests and especially with covid-19, I haven’t left my house for much lately. So I have been thinking about the things I can do within my own home to help.

My wife and I have two young boys (5 & 1) and having children can teach you a lot about yourself. With my older son having gone through daycare and starting public school this year, he has shown me how racism is not something we are born with but something that is taught, either directly or indirectly. He has had many teachers/caregivers or fellow students that have a different skin colour then his, but not once has he chosen not to listen or not to play with them based on their skin colour. He may have questions about someones skin colour and why it’s different then ours, and then it’s my job to explain that we all have differences but we shouldn’t treat people differently based upon those differences. I’m not trying to follow any sort of guideline except try to be a decent human being.

Thanks Nate, Andrew, John and Wai for speaking about this and keeping it current.

Ok I’m sorry this isn’t important at all in the grand scheme of things,
But I can’t believe John didn’t come up with “The Apollo Landing” for his finisher.
I was shouting at my phone!

This has been very frustrating. Nate brought up a great point I’d like to expand upon. If this were say 1933, we wouldn’t know about someone like George Floyd & there would be zero repercussions. Can’t imagine how many times that has happened throughout history. Countless. In 2020, this shit is flat out unacceptable. Truly hope this leads to some real change. Thanks to Andrew and Nate.

Indeed it has! Remember first hearing Mauro say it in NXT. Shades of Kay that is.

Brilliant intro to the podcast- makes me proud to be a patron. Solidarity from across the pond.

Great job everyone. Thank you Nate and Andrew for sharing your experiences. Honestly I was kind of put off initially by the focus being on these racial protests as I’m getting burnt out by the coverage, but I’m glad I stuck around and listened because Nate and Andrew provided some great perspective that (as a White guy) I think I needed to hear.

Absolutely mind-boggling and tragic what happened to George Floyd but maybe even more ridiculous is all the videos that have come out of police actions during the protests. Groups of black people calling in police to stop violent white “protesters” and then somehow the black people get detained?! It’s just insane.

Anyway that’s my two cents. If you’re going to the protests, please be safe and keep it peaceful.

Excellent podcast, Nate is such a great talker also kudos to John, Wai and Andrew on what must have been a difficult podcast.

On a more trivial note, I don’t think that the poster who suggested that WWE might have the Undercard to Backlash may not be far off.

Whilst they won’t make them have inferior in-ring matches, the actual Line-Up isn’t particularly great:

Also I’ve heard that Bryan VS AJ is going to be on Smackdown which (If true) negates the possibility that the ‘The Greatest Match Ever’ might not be the best match on the show. 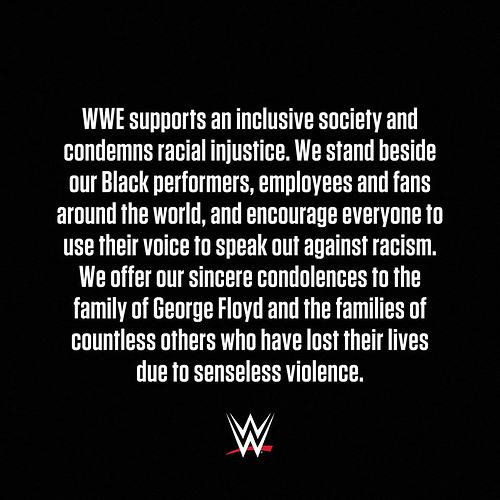 To be fair, I dont think there is anything WWE could have said/not said that would satisfy fans. People will roll their eyes at this, if they said nothing people would say they need to speak up, and if they went the Rykar route people would be outraged. They had no chance.

I was listening to a local radio show, I thought they discussed the topic quite well. Link is below if anyone wants to listen.

Was this on the flagship,longest running episodic show Raw?

Andrew,
Where are good places to find information on candidates that are running in different districts that represent views and values. I don’t mean to be naive, like with the NRA you can find their NRA score. Are there similar measures that help understand what people have stood for in the past related to specific issues involving criminal justice and police reform, etc.?