Sami Zayn to face trial at ‘Tribal Court’ on Raw

I think the fans turning on Cody is avoidable, largely based on how they book Sami Zayn between now and then. You can’t even hint at Sami winning the Rumble if he’s not going to. Don’t forget that in 2014, not only did they get crushed for not going with Daniel Bryan, but they also gave a huge build to CM Punk and then had him get tossed rather unceremoniously by Kane (the last time we’d see Punk in a WWE ring, for that matter). You obviously don’t want to telegraph too hard that Cody is going to win, but you also can’t set up somebody more popular than him as one of the legit contenders.

There are always going to be smarks in the crowd and on the Internet trying to recreate the 2013-14 Daniel Bryan thing, largely because they want to be able to say that they did. But you have to make sure that that sentiment stays within that niche of fans and doesn’t spread to the majority.

Though having said all of that, you also have to do a good job with Cody and he needs to deliver on the mic and in the ring. I think he’s a really easy character to heat up again, but you can’t just expect it to happen without effort and execution.

Im not so sure about Cody getting booed in any scenerio. Maybe at the PLR events, but on Raw or SD I am not so sure.

This fanbase since the pandemic is terrible at live events. They barely make any noise as it is and when they do, they seem to be quite happy with anything they are given.

I agree. The situation with Daniel Bryan in 2014 is very different than Sami Zayn today. Daniel Bryan had already been a WWE & World champion, main evented PPV’s and been shown to be at the level where he was deserving of a WrestleMania main event.

Sami Zayn I don’t think has ever had a singles match where he main evented a main roster PPV. He has never been WWE or Universal champion. He is a great sidekick character that the fans appreciate. Like I said earlier outside of this forum I haven’t seen any chatter that the WM main event should be Sami vs Roman. Not enough people see Sami anywhere near that level.

If WWE can’t do Rock vs Roman then there are more options open. Cody vs Roman seems to be the obvious option.

The only way for Sami to potentially sneak in is a multi-man match scenario. Roman vs Cody vs Owens vs Sami. Which would be easy enough to explain. Roman holds both belts so through WWE-logic they each get a contender. Cody is a contender from Raw. Owens from Smackdown. And so that Roman isn’t outnumbered he has Sami added to the match.

Since when is apathy being happy with what you are given. A fan base that is happy with whatever they are given is a fanbase that cheers regardless of quality. WWE Raw/SD fans are quite because it’s mostly families opposed to a bunch of 20 somethings.

You aren’t getting going to get crazy reactions like in 2014 in each city on a typical raw or sd, but if the pissed off fans do get upset about Sami not winning you are still going to hear those pockets of fans voicing their displeasure and it can snowball. Look at how they treated Liz Morgan in the Ronda feud, it still happens.

I get what you are taking about when it comes to quiet crowds, but huge difference in expecting fans to stay quite because they hate the booking compared to fans staying quite because alpha academy is facing the street profits for the 29th time and half the crowd is families. 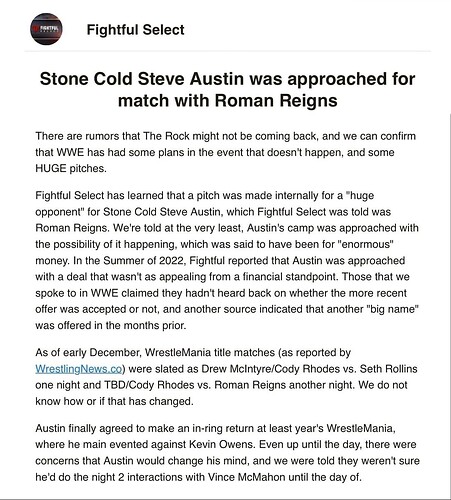 That’s a big match, but I’d still rather see Sami vs Roman.

Dave said SRS is lying. It was supposed to be SCSA Vs Brock. But that was turned down as well

I hope so. In no world should Austin step into the ring with anyone who is going to give him 18 German Suplex’s. Austin was smart to shut that down.

I honestly don’t know why they wouldn’t try and just do Austin / Goldberg IF they’re trying to do some legends match that isn’t Austin / Roman or Austin / Cena.

Austin would never do that match. He’s gone on record saying that he would only do a match that would be good, and a 50+ Austin vs a 50+ Goldberg would likely be a very shitty match.

I’ll start this by saying Austin going over Owens was absolutely the right decision for Mania last year. But I think WWE has shown that – for all of their flaws in booking “legends” – everybody eventually does the honors if they’re going to keep coming back.

Triple H, Goldberg, Shane McMahon, Angle, Batista, even Taker to a degree… you can argue with some of the booking, but they all did their fair share of jobs in their last/nostalgia run.

So if they have a good angle for Austin to put somebody over, I’m all for it and I think he would be too in the right circumstances. But if Roman/Rock would still be on the table for somewhere down the road, I don’t think Roman/Austin accomplishes anything for a storyline standpoint. Why does a “made man” like Roman Reigns need to beat both of them?

Though from a financial standpoint, I understand it 1000%.

If they kept it to an Austin style plunder brawl, it could be fun. As a pure match, of course not.

Of course it makes no sense from a storyline or building perspective but it’s all about legacy at this point. They want Roman reigns to be that legacy star like John Cena, or hulk hogan. A guy who absolutely dominates rhe era, and when you think of this generation think of him.

Nothing bigger than beating Brock, John Cena, the UT at wrestlemania, and Austin and rock to build that legacy.

If the match was against The Rock then there would be a real storyline component to the feud for the true “head of the table”. Roman beating Rock at WrestleMania would be the pinacle of the storyline. It solidifies Reigns as being at the same level as Rock, Austin, Cena, Hogan, etc. And the Bloodline as a group as important as the Shield, Evolution, DX, etc.

There would be nowhere to go except down and it would propel the Bloodline into their next phase of the story by breaking apart and starting feuds like Solo vs Reigns or The Usos vs Solo & Reigns which could last for another several months.

Whereas Roman vs Austin is just another legend. Beating him and then trying to keep the Bloodline interesting for another year to hope for Roman vs Rock at WM40 would really start to drag the storyline down.