“The General Sport Authority would like to apologize to the viewers and attendees of last night’s WWE event that took place in Jeddah, over the indecent scene involving women that appeared as an ad before a segment. It would like to confirm it’s total disapproval of this, in the shadow of its commitment to eliminate anything that goes against the communities values.
The authority has made sure to ban showing of any segment that involves women wrestling or any scenes related to it, and stipulated that to the company (WWE). The authority also disapproved any promotional stuff with pictures or videos showing women in an indecent way, and emphasized on commitment of this rule. And it’s a commitment that the authority would still commit to forever in all of it’s events and programs.”

I am guessing the Backlash ads and Renee interviewing Nakamura on the hype video before the match were causes for the outrage? Completely Ridiculous, nevertheless .

I heard it was a progressive city. That apology must be a hoax.

I love the “indecent” label. Back in 19th century England it was indecent for women to be in plays so men played all of the roles. As long as men’s “honour” is tied to women’s “indecency” we’re not going to see change over there. The King doesn’t have to worry about elections and protests are banned in Saudi Arabia. They’re at least a couple of hundred years behind on this issue. Every country has their issues, but let’s not kid ourselves that the young King will be some progressive hero - despite the propaganda. 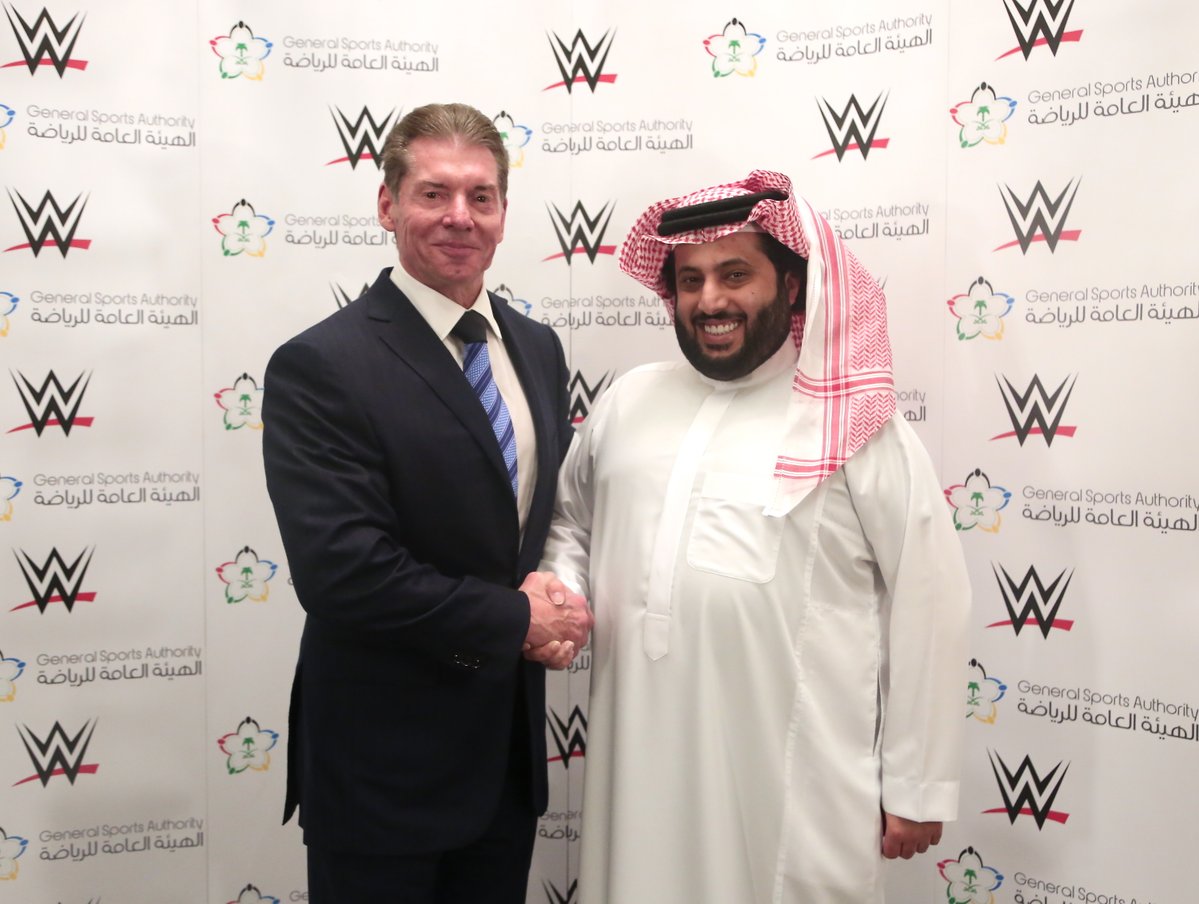 The Saudi General Sports Authority has apologized for an advertisement that aired during the Greatest Royal Rumble, claiming that it showed women's wrestlers who were dressed indecently.

According to my link it appeared to be that dual branded ad with all the lip synching. The one that only featured a couple women in it, who looked happy and in western sensibilities weren’t dressed prevocatively.

The “backlash” (see what I did there) from this simple error of showing western women on TV suggests that HHH was full of it days ago talking about how one day women will wrestle in Saudi Arabia. Women weren’t even allowed to be present at this event. Stephanie was completely absent. This backlash isn’t from women being half dressed and in front of the crowd it was from a snafu where women were even shown on tv by error.

I can’t believe wwe is in bed with this government. Money doesn’t talk, it demands and the cost is too great.

But it did have some nice fireworks on displays. There’s that.

tephanie was completely absent. This backlash isn’t from women being half dressed and in front of the crowd it was from a snafu where women were even shown on tv by error.

I can’t believe wwe is in bed with this government. Money doesn’t talk, it demands and the cost is too great.

But it did have some nice fireworks on displays. There’s that.

Not to go THERE - but it’s like Trump releasing his tax records. Sorry - not now, sometime later…

Maybe I’d feel better about the arrangement if the Fed actually cared about the Saudi people. But since they most likely don’t & this deal is just a cash-grab…I’m here for any & every piece of bad PR this generates. Maybe 5 years of doing a show with Marcus “Petty V” Vanderberg is starting to affect my capacity for compassion…Lol!

It looks like woman wont ever appear on a Saudi Arabian WWE event. It doesn’t mean Paul Levesque didn’t genuinely want it.

And it sounds like any appearance of a woman on screen is against their values. They didn’t mention the outfits.

I don’t think it would be right to have a womens match next time if its so against their values.

I think my problem with this is that these men are so insecure that they can’t let women have their own identity, or do anything in public without a male escort. At best the message is that women are second class citizens with limited rights, and at worst you could make the argument that women are property in that society.

A lot of this is my opinion, so take it as you will. I don’t want to judge a place that I’ve never been, but I’m skeptical of any absolute monarchy that’s calling itself open to “everyone,” when it doesn’t give equal rights to women and where killing LGBT people could be sanctioned by the govt.

I never realized that when a business sells someone a product they are getting “in bed” with that customer and endorsing all of their beliefs.

There is a certain bakery in Colorado who seemed to believe the above was true and many people accussed them of discrimination.

I’m actually amazed that the WWE were unaware about what they could actually show. They usually don’t make mistakes when it comes down to offending sponsors.

I wonder if there are any opt out clauses in this deal.

They we’re testing the waters. Similar to how you would hear a Hulk Hogan sound byte in a montage video. Except it was Carmella drinking water in her onesie shot from a low angle.

To be fair, I do feel like I deserve an apology everytime that Backlash video package comes on

I believe WWE has the best of intentions, but if it doesn’t work out and they are not truly part of any Saudi progress it’s okay, because they made a tonne of money for their shareholders.

I get why so many peoples are upset by this but you have to remember that change won’t happen overnight. It’s going to be a very slow process to change things over there and the fact that they slowly started to make so small change like letting women’s drive and having this type of event in there country is something that wouldn’t have happened a few years ago. WWE as sign a 10 years deal with them so i’m sure that someday, the government will be comfortable enough about the idea of letting women’s compete or just having women in some sort of role at these event but for now, we have to accept that this is a different mentality that ours. We might not agree with it but that doesn’t change the fact that it what’S going on right now.

You’ll be waiting a hell of a lot longer than 10 years. These are views and a culture that’s had this mindset for a very long time. Change won’t happen over night, yes. You are correct. However 10 years in this context may as well be overnight. We won’t see change for a very long time. It’s a very oppressive country and the fact that they allow Women to drive now is such a minor step that’s not even noteworthy.

I mean…At least it isn’t…

WrestleMania is the Ultimate Thrill Ride!™

WWE as sign a 10 years deal with them so i’m sure that someday, the government will be comfortable enough about the idea of letting women compete or just having women in some sort of role at these event

I’m not. Women still have little to no rights. Ten years is a drop in the bucket. Women will never wrestle in SA. The post here on the sports authority apology for showing a video of women and no woman being allowed on the premises shows that.

Compassion towards oppressor’s and profiteer’s is wasted energy.