On June 15th, Wall Street Journal first broke the story that WWE’s Board of Directors is investigating a secret settlement deal involving Vince McMahon and a former employee who he engaged in a relationship with.

Today, a press release was issued through Business Wire that Scott+Scott Attorneys at Law LLP is investigating WWE’s Directors and Officers for breach of fiduciary duties. It is noted in the presser that if you are a shareholder, contact attorney Joe Pettigrew.

Scott+Scott is looking into whether members of WWE’s Board of Directors or the company’s senior management team failed to manage WWE in an acceptable manner, in breach of their fiduciary duties and if shareholders have suffered damages as a result.

NEW YORK–(BUSINESS WIRE)–Scott+Scott Attorneys at Law LLP (“Scott+Scott”), a national securities and consumer rights litigation firm, is investigating whether certain directors and officers of World Wrestling Entertainment, Inc. (“WWE”) (NYSE: WWE) breached their fiduciary duties to WWE and its shareholders. If you are a WWE shareholder, you are encouraged to contact attorney Joe Pettigrew for additional information at (844) 818-6982, or jpettigrew@scott-scott.com.

Scott+Scott is investigating whether members of WWE’s board of directors or senior management failed to manage WWE in an acceptable manner, in breach of their fiduciary duties to WWE, and whether WWE and its shareholders have suffered damages as a result.

On June 15, 2022, the Wall Street Journal reported that the WWE board was investigating an alleged $3 million settlement that CEO Vince McMahon agreed to pay in January 2022 to a former WWE employee with whom he allegedly had an affair.

What You Can Do

If you are a WWE shareholder, you may have legal claims against WWE’s directors and officers. If you wish to discuss this investigation, or have questions about this notice or your legal rights, please contact attorney Joe Pettigrew toll-free at (844) 818-6982 or jpettigrew@scott-scott.com.

About Scott+Scott Attorneys at Law LLP

The aforementioned Wall Street Journal story reads that WWE’s board began their investigation in April and discovered other nondisclosure agreements from former female employees. The law firm Simpson Thacher & Bartlett LLP is watching over the investigation.

So every Joe, Curly and Mo, are going to have these kind of class action attempts (the ones that go anywhere need to get consolidated so Attorneys looking to make a quick buck get credit for aggregating people to join). Forget this Peter Pettigrew guy, the real thing here is…

There could be a case that WWE Board did violate its fiduciary duties and this would b a very challenging thing for the company should a lawsuit pick up steam and there be actual damages to the company as a result of the story re: Vince being made public (and how it came to be public)

This more than anything is where I see the pitfall for WWE as a company. The Vince thing will shake out one way or the other, but Breaching Fiduciary Duty could spell big big legal trouble for the entire company. Public companies have governance and protections for shareholders. (I am no longer a shareholder of WWE, I do not own shares at this time) and have not for a few weeks).
This shoe may still be yet to drop, and of course would require actual damages. It could also force the board to vote a certain way should the findings of the investigation into Vince suggest something one way or the other. Whether they can ultimately force Vince out could be a different discussion, but the Board may be bound by certain legalities to act a certain way.

One thing I keep coming back to is who did it serve to leak the story prior to a full investigation being complete. On the surface, it would appear damage to Vince’s reputation is damage to the company.

cc: @johnpollock Fiduciary Duty is important IMO if this story is going to be any more explosive.

The WWE will try to hide and obfuscate all of the details about the payouts and NDAs, downplay them even.

I can see why this would potentially be the cause for Stephanie McMahon stepping aside. If she had no prior knowledge of these NDAs, payouts, and behavior, just imagine how awful it would be to not only have to work closely with predators but for the principal one to be your Dad.

I hope no one “gets away,” and there is corporate and criminal accountability for their behavior where it’s warranted. Shit like this really needs to stop happening and these offenders need to be held y accountable for their exploration and abuse of others.

Come to think of it, the Q1 earnings call took place AFTER the investigation would have launched. (@johnpollock pls fact check me). If that’s the case, what an airball on communicating material risk to the company. As well as the shareholders meeting which took place after the earnings call.

@BrandonThurston
$WWE moving in the opposite direction of the indexes today. NYSE was closed yesterday for the Juneteenth holiday. 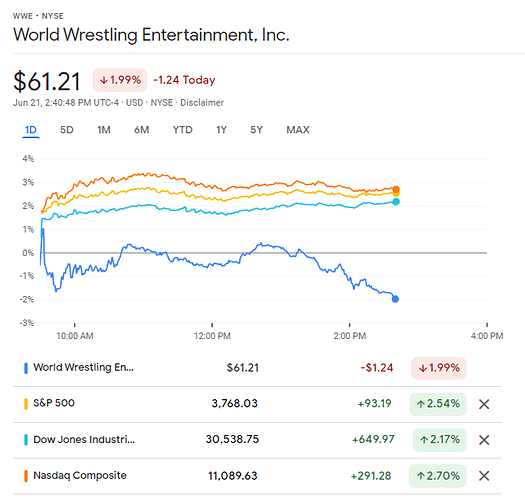 Say it 3x fast everyone!

Also, let this be a lesson in trusting “Stock Analysts” who just last week said the stock was going to $75-$82 (Morgan Stanley, Oppenheimer respectively).
Experts get paid whether they are right or wrong. You lose money if they are wrong. Do your own work!!! (Or just learn to identify GOOD analysis vs. window dressing).