I wanted to give my opinion and here you guys on yours when it comes to who actually does Spirts Entertainment in the wrestling industry.

I’ll start with something recent - the latest episode of Being the Elite. It had a great ending scene, where the camera follows Kenny through the hotel hallway as he is going to a room. He knocks on the door after some contemplation. The door opens. The Bucks are looking at him conflicted following recent events. The camera turns to Kenny as Kota Ibushi enters the frame. The Bucks let them inside the room. The door closes…

Just Awesome! An example of using social media to further your angles and storylines.

Now let’s rewind back to the first season of Lucha Underground. I’m starting the stream not knowing what to expect and at the end of the season I’m left with the feeling that I have watched a comic book come to life, with all of its outrageous individuals, unbelievable powers and goofy characters that actually works and is amusing and captivating.

The above are just two instances of what I believe the WWE have tried to achieve when it comes to their products but have ultimately failed and these Indy promotions and “fringe” wrestling stables carry out with impeccable understanding of what they are doing. Don’t understand me wrong, the Elite and Lucha are wrestlers, but they constantly produce what is in fact sports entertainment, one which is good.

Let me know what you think ifnyou like this topic.

Sports Entertainment is nothing more than just corporate buzzword to make an occupation sound more glamorous…like a janitor being a custodian or a secretary being an administrative assistant. 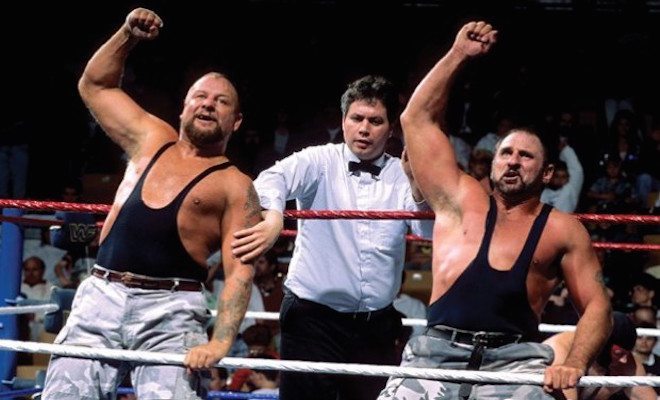 I don’t know why people still get upset by the term? It’s been in use for over 30 years now.

And it’s nothing to be angry about if the people that actually do it do not go out of their way to tell you it is Sports Entertainment. Yes it is a buzz word, but it is a true representation of what actually is the purpose of an “over” wrestling promotion.

I watched the BTE episode and thought it was great. I contemplate why I can accept the BTE presentation but can’t accept Bryan talking to KO backstage without acknowledging the camera crew. They break kayfabe and rip it to shreds on BTE. But for an odd reason I have this bias where I let BTE shoot in a hotel from multi-angles, but I think its fake when Stephanie meets the cast of Entourage backstage as it plays on the jumbotron. In order to enjoy the story, I dismiss that Nick Jackson shot this secret moment himself and posted it on youtube. My hypocritical ass also liked #FinalDeletion

My conclusion is it can be done successfully. But is fundamentally wrong.

Successful because it draws money. Wrong because it admits they’re acting therefore the fighting is illegitimate.

The term only exists inside WWE’s bubble and it’s always amusing to see fans get worked up about it.

When Munenori Kawasaki was on the Blue Jays, I thought he was was entertaining in a sport if that counts